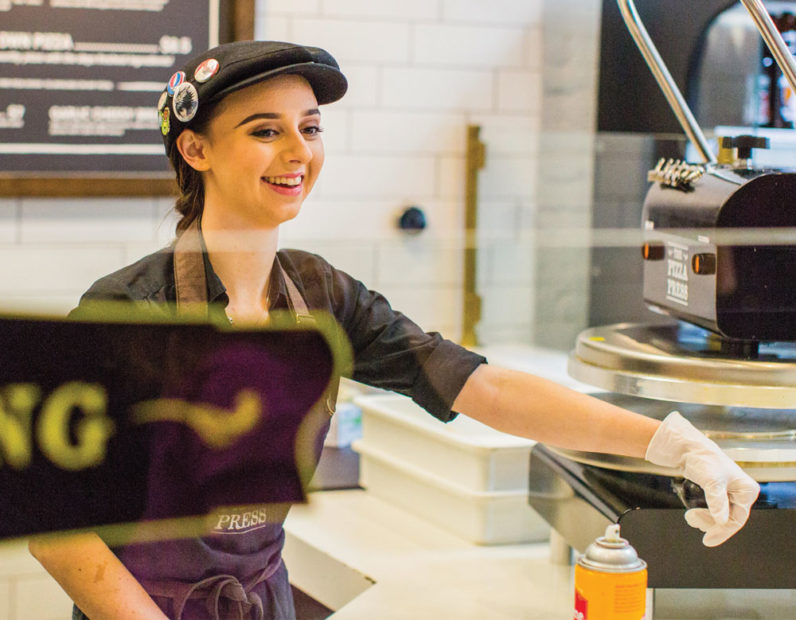 The news media takes its share of abuse these days, but Dara Maleki, cofounder and CEO of the Pizza Press, remembers when hometown newspapers were seen as truth-telling crusaders for justice and defenders of democracy. Opened in 2012 next door to Disneyland, the chain has expanded to 16 locations in Southern California and one each in Austin, Texas, and Celebration, Florida. At The Pizza Press, pizza makers are “editors,” but guests call the shots and “publish” the pies of their choice. Naturally, we wanted to get the scoop on this unique concept, so we went straight to the source with some hard-hitting questions.

PMQ: As a former newspaperman myself, I have to ask, what is the story behind Pizza Press’ newspaper theme?

Maleki: When I founded The Pizza Press, the vision was clear: I wanted to create an ethos that elevated the “build your own pizza” concept to the next level. [It would be] a totally unique and immersive environment in which people could enjoy great food they had created themselves, relish friendly service, and experience a welcoming and cohesive environment. Inspired by the mechanized dough press, The Pizza Press harkens back to an industrialized era when newspapers were the foundation of the local community.

PMQ: How does the newspaper theme play out in the restaurant?

Maleki: Our editors help guests create a custom newsworthy pizza or select one of the signature pizzas named after major newspapers, such as The Times, The Tribune, The Chronicle and others. Those are developed by our professional chef, who also creates seasonally inspired limited-time-offer (LTO) creations to keep things topical. The pizzas are published in just under four minutes.

From a decor perspective, the black-and-white theme is carried throughout, with artwork featuring old printing presses, old typewriters and other printing paraphernalia. We even carry the theme into the uniform, with the editors wearing jaunty newsboy caps. 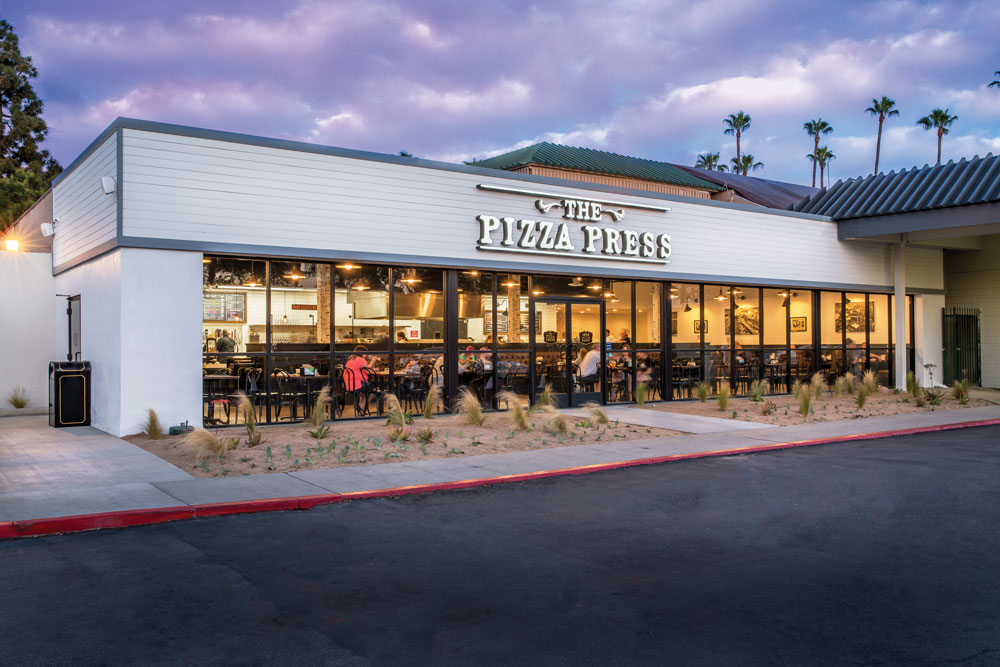 PMQ: What kind of relationship does your Anaheim location have with Disneyland?

Maleki: The Pizza Press has always had a strong relationship with Disneyland, both in terms of its dedicated employees— or cast members, as they are called—and the visitors. We offer cast members 25% off their entire meal on a regular basis. Disneyland also inspired one of the pillars of our brand: newsworthy service. We believe in going beyond the standard customer service model by creating an entire theme that’s predicated on an honest, trustworthy experience, which is also a core tenet of journalism.

PMQ: The fast-casual segment is a crowded one. How do you make your pizzas stand out in terms of freshness and quality?

Maleki: All ingredients are fresh and locally sourced for high-quality, better-for-you food options. Vegetarian, vegan and gluten-free options are available as well.

We work with small purveyors, like with our sausage, which is made especially for our brand, and we are continually sourcing new ingredients. We make our dough in-house several times a day, and we have a unique conveyor oven, which cooks the pizzas in about three to four minutes. What also sets us apart from the competition is that we are open late.

PMQ: Tell us about your most popular pizzas.

Maleki: The Times (extra-virgin olive oil, mozzarella, chicken, grape tomatoes, red onions and smoked Gouda, finished with fresh cilantro and barbecue sauce) and the Tribune (red sauce, mozzarella, pepperoni, red onions, mushrooms, roasted bell peppers, sweet Italian sausage, Kalamata olives and ricotta) are our most popular signature pizzas. We also run LTO pizzas like the Buffalo Post, which is a spicy chicken pizza, and The Bulletin, which is an amazing, tangy, pulled-pork pizza. However, we encourage people to use their imagination and create what sounds good to them, with nearly 30 toppings from which to choose, more than five sauce options, and eight finishing choices. 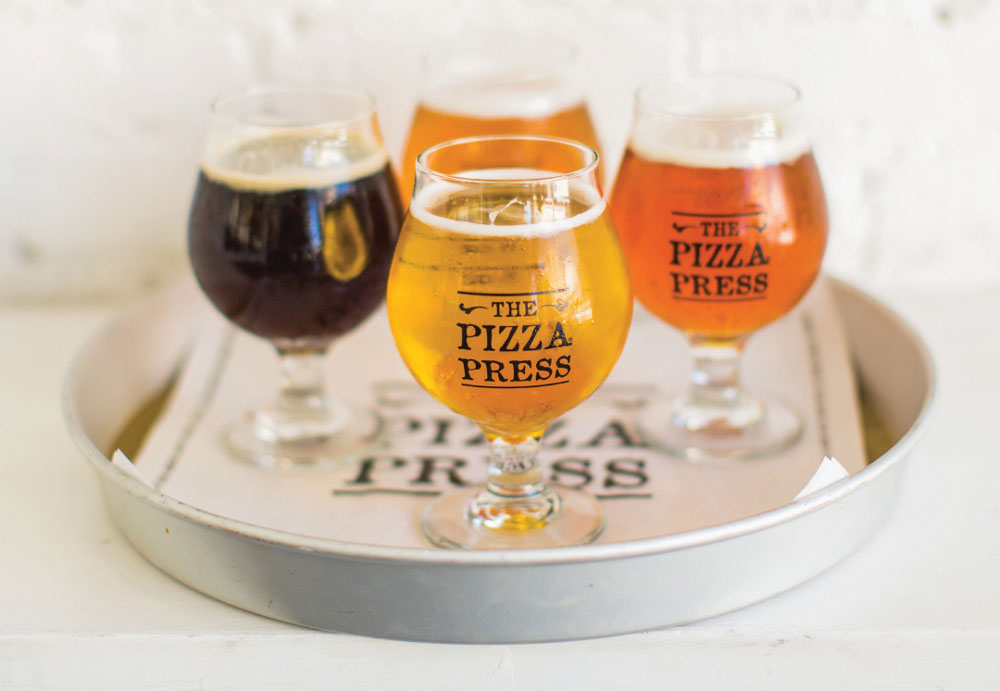 PMQ: What about your beer selection?

Maleki: We put our focus on craft beers and make it a point to offer local craft beers at every location. Each Pizza Press location typically has between 12 and 24 craft beers on tap, which change regularly and regionally.

We are big on beer and pizza pairings at The Pizza Press. Pizza and beer are a great combination, because they can enhance or contrast each other’s flavors. It’s easy to find light, crisp beers to match with lighter, less dense pizzas topped with vegetables and chicken, or dark stouts that match up well with hearty pies topped with a plethora of meats.

PMQ: You also offer beer floats and beer cocktails. What are some popular selections in that area?

Maleki: Our root beer floats are made with Virgil’s Root Beer and vanilla bean ice cream. For the adult version, we recommend adding the ice cream to any of our darker beers, like a stout.

PMQ: What role has online ordering played in your success so far?

Maleki: We offer online ordering at all of our locations. All of the online ordering platforms can be found on our website, although some restaurants use different platforms and different delivery options (via DoorDash and the like), depending on the location.

Online ordering is great for people who want to be in and out in a flash. Sometimes our customers don’t have the time to work with our editors in person to create their perfect pizza, so this gives them the option to enjoy a freshly made and delicious pizza even on their busiest days.

We also just launched our app this summer, which has been a big success, with both online ordering and a loyalty program. We hope to continue to add to its capabilities for promotional tracking and redemption. 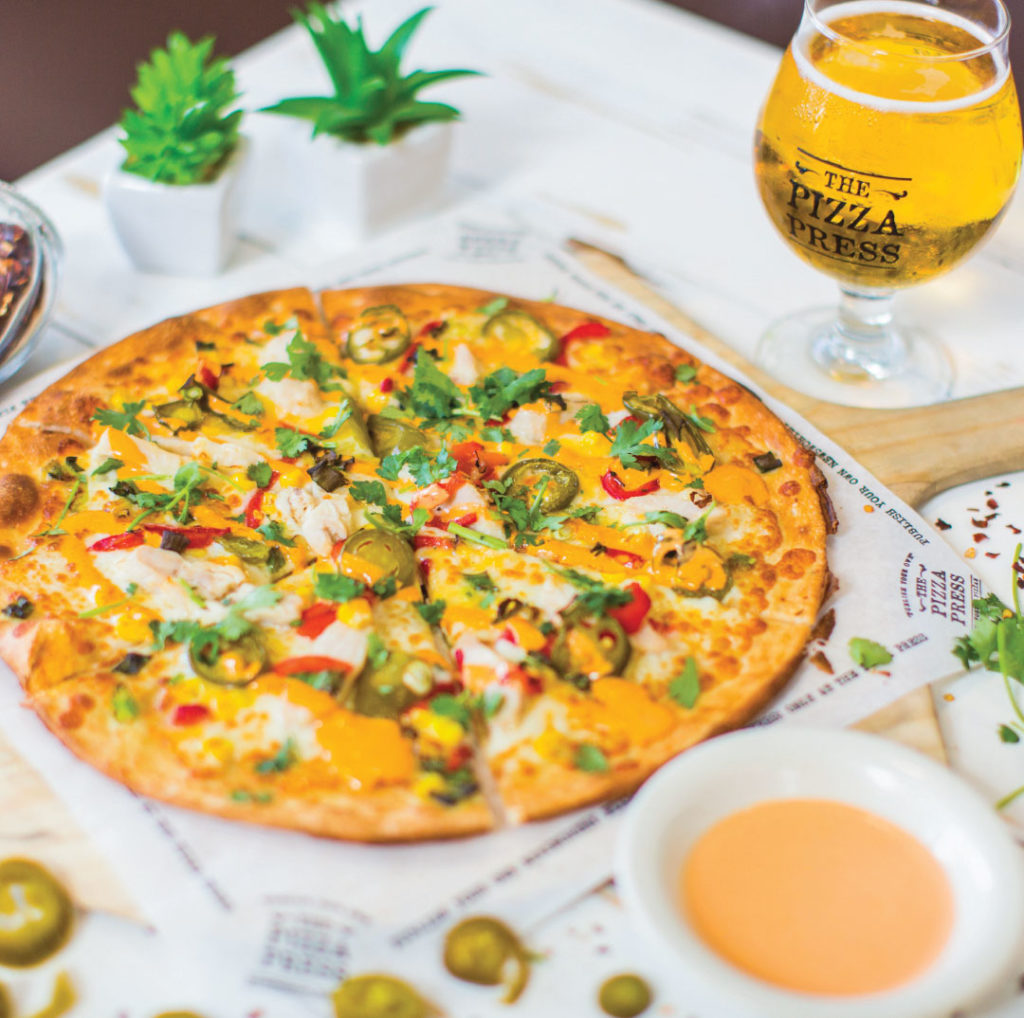 PMQ: What has been the key to growing from one locationto 16 in five years?

Maleki: We are entrepreneurs at heart and are looking for the like-minded. I started locally in my hometown of Anaheim but quickly realized I was onto something larger. From a corporate perspective, while we’ve expanded, we’ve focused on our roots in Southern California, and that’s the reason we want franchisees. We want you to embrace your local community and be a part of bringing The Pizza Press everywhere by focusing on your own backyard.

We’re taking our unique publish-your-own-pizza concept to other parts of the United States and the world, with more than 100 units sold. We’ve been operating as the dark horse for several years, and now we’re ready to break out into the national arena. The Pizza Press franchise program is the engine that fuels our commitment to encourage small business owners to continue building on this respected brand. One of our key growth strategies is targeting multiunit owners, so we offer a discount to franchisees who sign to open at least two units.

PMQ: What are your plans for growth in the next five or 10 years?