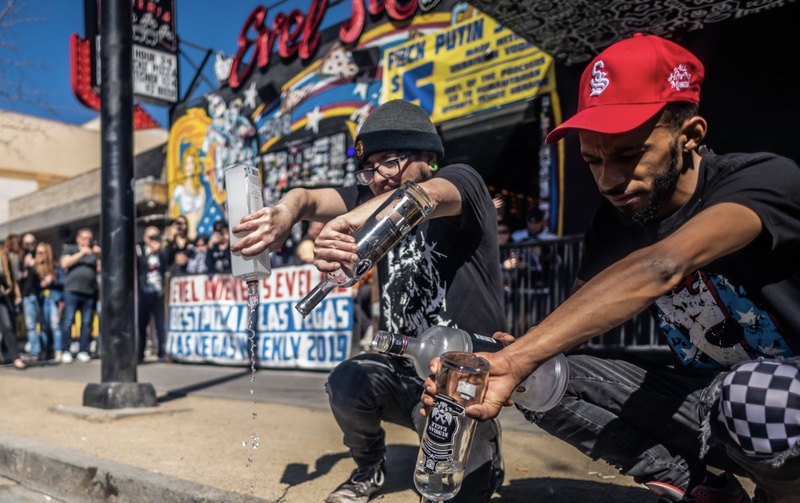 Customers at Evel Pie paid $300 for bottles of Russian vodka just to pour them down a drain.

Restaurants and bars around the country have been getting rid of their Russian-made vodka to protest the war in Ukraine, but Evel Pie in Las Vegas took a different tack: They sold Russian Standard vodka for $300 a bottle last week, then watched customers pour the stuff down a drain in front of the restaurant.

According to Evel Pie, the profits from the Russian vodka were donated to humanitarian relief efforts in Ukraine, currently under attack by Vladimir Putin’s forces in a war that has stirred outrage around the world.

Evel Pie owner Branden Powers has since taken the protest one step further. He’s now selling shots of Nemiroff vodka from Ukraine for $5 each—and donating the profits to the Red Cross. The ”F— Putin” shots went on sale Saturday, February 27.

According to an Evel Pie post on Facebook, the company burned through 10 cases of Ukrainian vodka in the first 24 hours of the promotion. Evel Pie is also donating to Chef Jose Andres’ World Central Kitchen, which has been serving hot meals to Ukrainian refugees at a border crossing in southern Poland.

“We are proud to be a small part of a growing worldwide movement,” the Facebook post concluded. “Every bit of support helps!”

According to Fox Business, Powers said he’s seen customers lining up outside Evel Pie’s door to buy the shots, including some Nevadans who were born in Ukraine. “We’re going to keep on doing this as long as Putin illegally occupies Ukraine,” Powers said.

“We love the Russian people,” he added. “This is 100% focused on Putin and focused on getting money to Ukrainian people in need through various humanitarian efforts within Ukraine.”