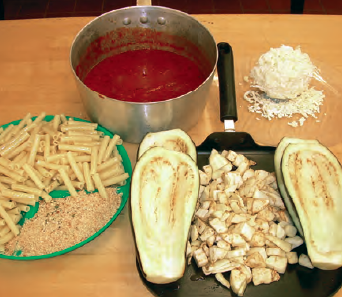 Those who’ve spent time in Sicily may recall that eggplant is a popular ingredient in many dishes. My brother, a chef who lives in Palermo, loves to make this eggplant penne bake for the events he caters. The first time I tried it was at a wedding I attended in Palermo; it was made with linguine (also good) and didn’t have the bread crumb topping, which I added later as my own special touch. Once I came back to the States, I started making it and telling others about it. Now I see it showing up at local New York pizzerias, offered by the quarter or the slice, and it’s slowly spreading. Guess they know a good thing when they taste it!

Bring a pot of water to a boil. Add penne pasta and a small amount of oil, cooking until al dente. Drain in a colander and return the pasta to the pot (cover it to keep warm). Cut the eggplant in half lengthwise. Score around the sides with a sharp knife, being careful not to pierce the shell. Scoop out the inside of the eggplant with a spoon; coarsely chop the flesh and set it aside. Sprinkle 2-3 spoonfuls of sea salt over the chopped flesh and open shells. Allow them to set for 1 hour while the salt helps the eggplant dehydrate. Once you see black water come out of the eggplant, rinse everything extremely well to remove salt, and pat dry. Brush the insides and outsides of the shells with olive oil. Heat the remaining oil in a pan; add the onions and cook until tender. Add garlic and cook for 1 minute. Add the chopped eggplant and cook, stirring frequently, for 5 minutes. Add tomatoes, oregano, salt and pepper. Bring to a boil and simmer for 10 minutes, until thickened. Remove from heat, add pasta and stir. Spray a cookie sheet with oil, arranging the eggplant shells in a single layer. Divide half of the tomato and pasta mixture between the shells. Place mozzarella cheese over the mixture, and pile the remaining tomato and pasta mix over the top. Mix together the Parmesan cheese and bread crumbs, and sprinkle it over the top, patting it lightly into the mixture. Bake in a 400° oven for 25 minutes, or until the topping is golden brown. Serve hot and enjoy!

Chef Bruno is the corporate chef for Marsal & Sons.