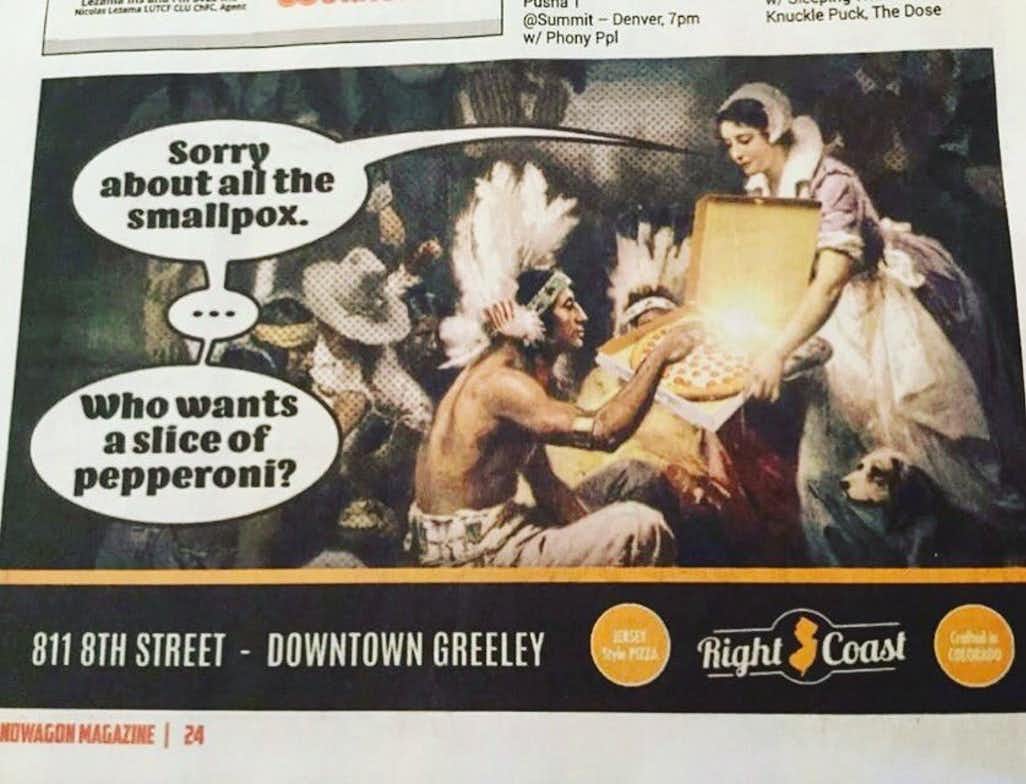 A recent magazine ad making light of Native Americans’ experience with smallpox is an example of how edgy humor can backfire for pizza restaurants.

Right Coast Pizza, located in Greeley, Colorado, has come under fire after the Thanksgiving-themed ad appeared in a local music, arts and entertainment magazine called BandWagon. The ad depicts a woman in pilgrim attire offering pizza to a Native American man, with text that reads, “Sorry about all the smallpox … Who wants a slice of pepperoni?”

Epidemics of smallpox, a disease brought to the New World by European settlers, ravaged Native American tribes for centuries. Natives of the Americas had no history of exposure to the viral infection and, thus, no natural immunity against it.

Right Coast Pizza owner Justin Vogel told the Denver Post that he was trying to prevent circulation of the ad after the pizzeria received angry phone calls and emails about it. The ad has been removed from the publication’s website.

“I take full responsibility,” Vogel told the Denver Post. “We screwed up. How can we make this right?”

He said he gave the BandWagon staff creative rein in developing the ad, but when they sent it to him for his review, he didn’t look at it carefully. 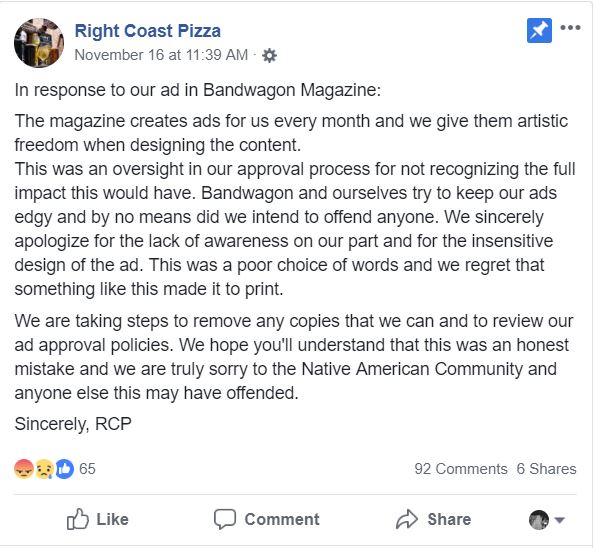 In a Nov. 16 post on Facebook, the company said, "Bandwagon and ourselves try to keep our ads edgy and by no means did we intend to offend anyone. We sincerely apologize for the lack of awareness on our part and for the insensitive design of the ad. This was a poor choice of words and we regret that something like this made it to print.”

In the interview with the Denver Post, Vogel said, “I don’t know if the right term is ‘racist.’ It is definitely not correct. It is, basically, making light of genocide. It is coarse and inappropriate.”

According to History.com, there is evidence that 18th-century colonists intentionally gave smallpox-infected blankets to Native Americans in an attempt to infect a tribe of Delaware Indians who had waged war on Fort Pitt in present-day Pittsburgh. Some historians have also said the U.S. Army deliberately gave smallpox-infected blankets to tribes in the 1800s as a biological weapon of genocide, although the question is debated among scholars.