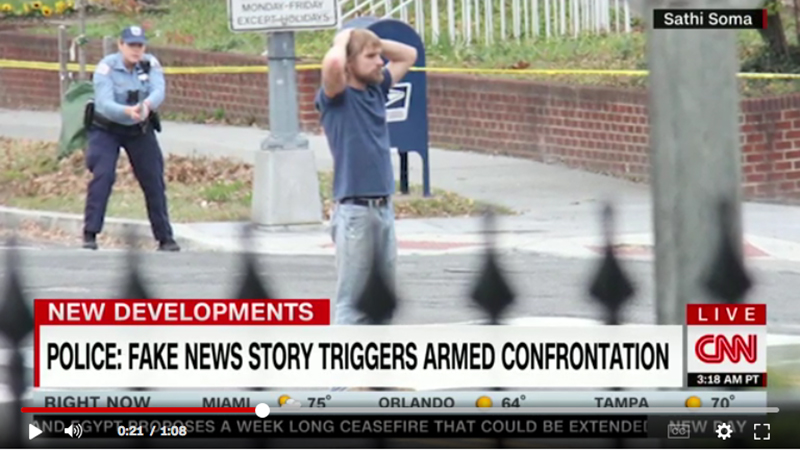 As fake-news websites proliferate on the Internet and phony stories and theories enjoy wide circulation on social media, one pizzeria in Washington, D.C. has been paying the price. And things went from bad to worse on Sunday as a man stormed in to the restaurant with an assault rifle and frightened away patrons and employees.

There were no deaths or injuries in the incident that took place at Comet Ping Pong, a long-standing, family-friendly pizza operation owned by James Alefantis. The suspect, identified as Edgar Maddison Welch, 28, of Salisbury, North Carolina, surrendered to police and was arrested and charged with assault with a dangerous weapon, according to CNN.com.

According to police, Welch said he was investigating a bizarre online conspiracy theory, often called “Pizzagate,” which holds that Comet Ping Pong is a hub for illegal sex trafficking and pedophilia operated by or involving Democratic party leaders, including Hillary Clinton and her campaign manager, John Podesta. No evidence to support this claim has ever been presented, and D.C. police say it’s “fictitious,” but the rumors have continued to spread via right-wing websites, fake news sites, social media and Reddit threads.

The conspiracy theory points to emails from Podesta, released to the public by WikiLeaks, that contain a number of references to pizza. Since Podesta has dined at Comet Ping Pong in the past, the right-wing theorists reportedly believe that “pizza” must be a code word for sex trafficking or pedophilia. As these spurious claims have proliferated, Alefantis says he and his employees have received hundreds of death threats.

According to the Washington Post, Welch spent 45 minutes roaming the pizzeria with an AR-15, searching for proof that underage sex slaves were being held captive there. “The few patrons had fled before Welch shot off the lock to an inside door, sending a bullet into a computer tower,” the Post reports. “The North Carolina man then turned the gun on an employee who emerged from the back holding pizza dough. The worker ran out, unharmed.”

After police arrived and surrounded the restaurant, Welch eventually came out and gave himself up. “During a post-arrest interview this evening, the suspect revealed that he came to the establishment to self-investigate ‘Pizzagate’ (a fictitious online conspiracy theory),” the police department said in a statement released to the news media.

According to the Post, friends describe Welch as the loving father of two young girls. “He most likely really believes the conspiracy theory,” one friend said. “He’s a good guy with the best of intentions. He probably saw himself as more on a hero mission to save children than anything else.” His aunt, Tajuana Tadlock, described him as “a sweet young man with a big heart. We are all in shock right now. We are still trying to get our minds around what happened. This is totally out of character for him.”

According to court papers filed in Welch’s case, he went to Comet Ping Pong to rescue children but ultimately decided that “none was being harmed there,” the Post says.

Alefantis released his own statement on Comet Ping Pong’s Facebook page: “There will be a time and a place to address how and why this happened in greater detail. For now, I will simply say that we should all condemn the efforts of certain people to spread malicious and utterly false accusations about Comet Ping Pong, a venerated DC institution. Let me state unequivocally: These stories are completely and entirely false, and there is no basis in fact to any of them. What happened today demonstrates that promoting false and reckless conspiracy theories comes with consequences. I hope that those involved in fanning these flames will take a moment to contemplate what happened here today and stop promoting these falsehoods right away.”

After the incident, a new conspiracy theory began to spread on the Internet, claiming that it was staged or a hoax, the Post reports. But according to NPR, the original theory – claiming that Comet Ping Pong is a hub of illegal sex trafficking – received another boost Sunday night when Michael Flynn, Jr., the son of the Trump administration’s incoming National Security Adviser Michael Flynn, tweeted about it. “Until #Pizzagate proven to be false,” Flynn, Jr. tweeted, “it’ll remain a story. The left seems to forget #PodestaEmails and the many ‘coincidences’ tied to it.” He continued to retweet other people who claimed that the “mainstream media” is intentionally covering up the alleged pedophilia ring.