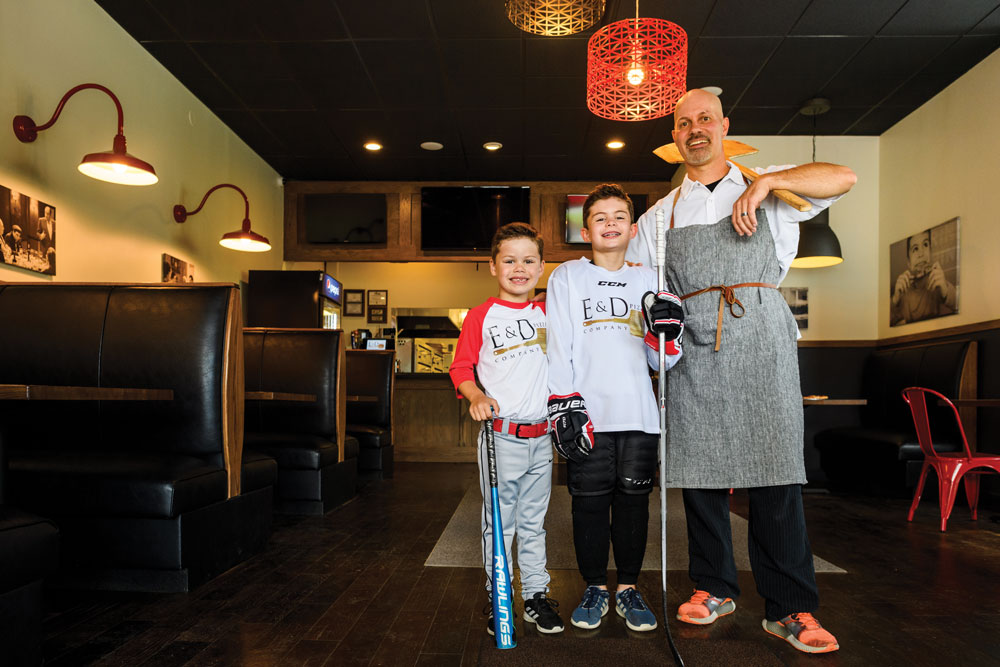 To build a successful new pizzeria in pizza-crazy Connecticut, serving good pies isn’t good enough. But as a veteran restaurateur, Michael Androw was undaunted when he launched E&D Pizza Company in Avon five years ago—he had a plan to win hearts, minds and stomachs, and it all started with local kids.

“We’ve got great food—big deal,” Androw says. “So does everyone else, or they wouldn’t still be in business. So we can’t rest on that laurel. I want to get into your house and your dining room. Who do you invite to your house? Friends and family. That’s my in! As parents, who do we appreciate the most? It’s the people that do stuff for our children.”

Fortunately, as a father of two young sons, doing stuff for kids comes naturally to Androw. He has applied that skill to building one of Connecticut’s most acclaimed pizza shops in just a few short years—and at the end of the workday, he still has time to spend with his own boys, which, for Androw, was the goal from the start.

“As soon as you can, get off the line, get out of the kitchen and onto that floor. Introduce yourself, ask how everything is, thank them for coming, and move on. Now they can tell people they know you—they know the owner.”

Saying No to the Dish-pit

Androw paid his dues in the restaurant biz before starting E&D Pizza Company (named in honor of his sons, Enzo, 9, and Dario, 6). His first job as a teen was in a local pizza shop. “I walked in there the first day, and the owner said, ‘Head to the dish-pit.’ I said, ‘Whoa, whoa, you don’t understand. I’m not a dishwasher. I’m a pizza maker!’ I begged and pleaded with him to give me a chance. He let me try saucing and cheesing. I didn’t know what I was doing, but I was hell-bent on staying away from that dish-pit.”

For the next several decades, Androw gained experience in every aspect of the food and beverage business, managing, operating and co-owning casual- and fine-dining operations as well as nightclubs and bars. “Then, one day I looked in the mirror and said, ‘What’s going on here?’ I had a wife, two small kids—one newborn—and I was working these crazy hours. I thought, ‘What is the best facet in the restaurant industry I can work in and still be able to maintain a normal life?’ That took me back to my roots in pizza—it’s family-oriented with family hours.”

Starting a new restaurant from scratch might not seem like the best way to spend more time with your family, but, like we said, Androw had a plan. With the unwavering support of his wife, Sherry, he committed to working exhaustingly long hours over the short term, knowing he could reclaim his life as a family man once the business took off. “When you start with a sales number of zero dollars and you open the doors on day 1, you may have all your ducks in a row, but you still need those bodies,” he says. “There were some dark days in the beginning. I worked doubles seven days a week. I opened, I closed. When I left in the mornings, the kids were still asleep. When I got home at night, they were already in bed. But this was a means to an end. You stick with the business plan and execute, execute, execute day after day, and it works. But it’s not easy.”

The Best of Both Worlds

E&D Pizza Company started out in a tiny space, with carryout as the primary focus; as demand for his pies soared, Androw moved into a larger building next door a year and a half later. As a pizza maker, he believes in slow, cold fermentation and attributes much of his pizza’s deliciousness to his 48-hour cold-rise dough. “The secret is, we take our time and don’t cheat,” he says. “We’re just retarding that yeast and slowing that maturation process down. This allows the dough to form those complex carbohydrates and create those natural sugars on their own. It can be a pain in the neck, but the dough ends up with this fantastic flavor profile.”

Androw describes his pizza as a hybrid of two famous styles, neither of which has anything to do with New Haven. “It has the look of a New York-style pizza, but it doesn’t have that fast-rise dough they use in New York. It has the flavor profile of a Neapolitan. So it’s the best of both worlds.”

Food writers in Connecticut agree. Hartford Magazine credited E&D for having the best pizza in the area for the past three years—with Frank Pepe’s local stores coming in second place. E&D also headed up the Hartford Courant’s “best pizza” listing this August, while Connecticut Magazine ranked it as the one of the five best in the state for 2019.

And Androw doesn’t have to go far to find the ingredients that make his pizza so exceptional. He sources many of them from a hometown farm, the Pickin’ Patch, located a mile away from his restaurant. “That stuff is out of this world, especially in the summer,” he says. “We also buy from a regional Hartford market, but when you can get it from the farm, where it’s coming out of the ground and you’re cooking with it three hours later, there is no comparison.”

Androw admits using premium ingredients sends his food costs “through the roof,” adding, “It’s less money in my pocket, but we reap the benefits of tremendous popularity and awards, so it’s worth it to me. Price-wise, I stay competitive in the market and take the hit personally. I don’t believe in making a million dollars in a day and getting out. I’d rather have longevity and make it over time.”

But maintaining longevity is about more than the menu. Androw has made sure to embed E&D in the local community through partnerships with the schools. A suburb of Hartford, Avon is a family-centric town, and E&D is a family-centric pizzeria. “Pretty much everyone in our market has 2.5 kids, a white picket fence and a golden retriever,” Androw notes. “It’s family, family, family. Everyone has kids in the schools. So if the schools need something, I don’t care what it is—the answer is, ‘Yes, we will support you.’ We take the money we used to allocate for things like direct mail or advertising in local newspapers, and we give x amount of dollars in food away.”

Andrew also forks over cash to support local youth sports. From lacrosse to baseball, hockey and football, kids all over Avon show off the E&D logo on their jerseys while their parents, aunts and uncles cheer them on from the bleachers. “Get your name on that jersey,” Androw says. “Get your name on the banner on the outfield wall and on the football field’s sidelines. Get in front of those families. If I sponsor your team or provide for your kid’s school event or fundraiser, I know your kids know us. You see E&D Pizza Company’s name on your kids’ jerseys twice a week in the laundry. We’re the pizzeria that’s there for your children. Now I’m in your head. I’m gonna get you.”

“We Are Our Own Best Marketing”

While Androw focuses on carryout and delivery, which account for 80% of his business, his 40-seat restaurant is also a welcoming environment for customers of all ages. “My mantra is, there’s no rule against doing it right,” Androw says. “I’m not saying you have to offer a fine-dining level of service in a family-themed pizza restaurant, but there’s no rule that you can’t try.”

Still, family-friendly means kid-friendly, and things can get rowdy some nights. “We don’t thumb our noses at customers when they bring in their kids,” he says. “We embrace it. Come in, have fun. If you want to be loud, be loud. Generally, most kids are well-behaved, but they’re still kids. They’re not gonna act like Grandma and Grandpa at a white tablecloth dinner. They’re gonna act like kids, and that’s fine. Something would be wrong if they didn’t.”

And when customers walk through his door, Androw makes sure they know who he is. “As owners, chefs and pizzaiolos, we are our own best marketing,” he says. “So many of us have spent so many years in the back of the house, and it’s difficult to go out and talk to people, but you’ve gotta cut that cord. As soon as you can, get off the line, get out of the kitchen and onto that floor. Introduce yourself, ask how everything is, thank them for coming, and move on. Now they can tell people they know you—they know the owner. That’s your best marketing tool, and it doesn’t cost you a dollar.”

That kind of one-on-one marketing can get harder as your company grows, but opening multiple pizzerias isn’t on Androw’s bucket list. “I’ve done what I’ve done with E&D with a purpose in mind,” he says. “I wanted to create a fantastic family-friendly pizza destination that’s known locally, statewide and nationally. I’m happy with that. That’s what drives me. The idea of more money, more restaurants doesn’t drive me.”

Like his restaurant, Androw is all about family, and with those dark days of running a startup behind him, he can spend more time with Sherry and the boys. “We have created something wonderful on a small scale, but right now I want to be Dad,” he says. “I want to be involved in my sons’ lives. To have a normal life is more valuable to me than anything else in the world right now. Having built a good business and having a tremendous staff that executes on a high level every day provides me with that opportunity.”