Most everyone knows what the "snowball effect" is. It's when one little thing gains momentum and grows, picking up more volume as it moves. The snowball effect is pretty much the only way to explain what has happened with the U.S. Pizza Team.

Not only has the team grown, it seems that everything involved with it, from publicity for the team to business opportunities for the team members, has snowballed.

Last year, the U.S. Pizza Team had three members; one dough stretcher and two members who competed in the culinary event at the World Pizza Championship. Each member competed in one event. We won Best in North America for one culinary entry then. This year, we had seven team members competing in every event, with some entered in as many as five. 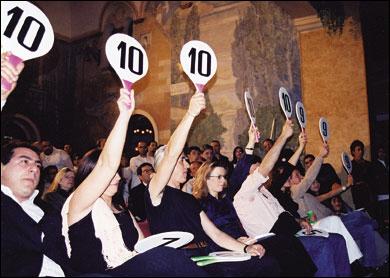 You may remember a phenomenon that happened several years back at the Winter Olympics. There was a team from a Caribbean island that entered the bobsledding competition. This small island had never seen a single snowflake. Most of the other bobsledders, along with the media, thought they had no business there. This ambitious team from the Caribbean paid no attention to what others had to say and stuck to doing what they came to do. While they didn't win the gold medal, they did surprise and stun the entire world with the performance they put in. They came as the underdogs and returned four years later with something more valuable than a gold medal. They returned with the respect and admiration of their fellow competitors and earned the status of legitimate contenders. They were the Jamaican bobsledding team and their popularity snowballed.

It is easy to compare the U.S. Pizza Team to the Jamaicans. They were a group of Americans who traveled to Italy to compete in an Italian-dominated food competition. They did a little better than the Jamaicans. One of their pizzas won second place in the world, they won Best in North America and even took third place in the dough stretching competition. They walked out of the competition with their heads high knowing next year they would return with the respect of not only the Italians, but the rest of the thirty-something countries who competed – and now their popularity is snowballing.

The snowball started rolling in January at the International Restaurant Show in New York City. The U.S. Pizza Team found our fastest pizza maker, largest dough stretcher and individual acrobatic dough tosser. Not only was this a fun time and a crowd pleaser, it attracted CNN's Jeanne Moos, USA Today, Newsday, the Food Network (for possible inclusion in the Top Five Food Events of 2003 special) and several local print media. Pizza team members were in the pages of USA Today and CNN put the three-minute segment by Jeanne Moos on rotation and ran it eight times the day after the show. When the newly anointed pizza team members got home, their local media were waiting.

The pizza team's snowball continued to gain momentum in February with the Mid-America Pizza Show in Columbus, Ohio. Here the culinary members of the team were selected, and the media followed. Between February and April, 2003 team members continued to receive attention from local media and started to see increases in business, especially after returning from the World Pizza Competition in Italy in April. 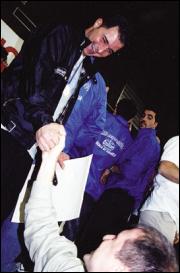 "Winning this world title is the greatest thing that could happen," said George Giove, overall second place winner in the culinary competition. "All my dedication and hard work paid off. Coming to Italy, where pizza was born, and winning against the Italians in their homeland, as an American is history. It proves that Americans can make pizza just as well as the Italians." George competed in the culinary, largest dough stretch, fastest pizza maker, team acrobatic and individual dough tossing events.

"Right after we won the Pizza Pizzazz and our spot of the U.S. team, we wondered what this would mean to our business," says Jack Atlas, traditional style U.S. Pizza Team member and co-owner of Gahanna Pizza Plus/Bexley Pizza Plus. "We had all of the major affiliates do something on us along with radio spots and newspaper articles. It's still early, but from what we can tell so far, this has doubled our business. We are stunned. We have had people come in from as far as 75 miles away. The exposure has been great. We are in an industrial area and many of the businesses had never heard of us before. Now, we are really starting to process a lot of large order from these companies. This has turned out to be so much bigger than what we thought." 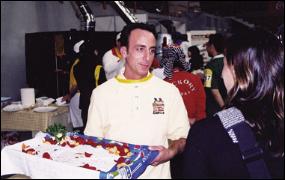 Joe Carlucci is the owner of Carlucci's Restaurant in Bethel, Connecticut. Joe competed in the culinary competition, largest dough stretch and team acrobatic segment. "Before I went to Italy, we had a tremendous boost to business that resulted from the media exposure. The U.S. Pizza Team has in every way, shape and form benefited me. I was getting close to closing the doors before I went and now business is up 30 to 40 percent from what I can tell so far. When I got back from Italy, I was contacted by more media and had two schools call me to come out and do demonstrations and talk about the team. Another opportunity that has opened up is this Kids' Night and pizza kit I am doing. On Mondays, I am following the idea of Tony Gemignani. I invite kids in for a 'throw with a pro' night where I show kids how to make pizza and toss dough. I offer them the chance to purchase a pizza kit that includes enough stuff to make a pizza and also a Pro Dough. This is a glow-in-the-dark practice dough all of the acrobatic dough tossers use to practice their routines. No one here has ever seen anything like this." 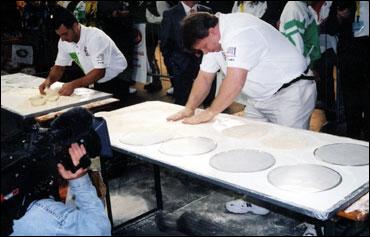 Brian Edler, who owns four Domino's franchises in Ohio and Michigan, was a part of this year's team and competed in the fastest pizza maker, largest dough stretch and team acrobatic competitions. Brian placed third in the world in the largest dough stretch competition and was the first American to ever place in the event. "After I won a spot on the U.S. team, I had three front page articles in the papers. Within a week we got busier than I expected. I was also invited to be on the "Best Damned Sports Show Period" with Tony Gemignani. That generated a lot of interest and also got me a free trip to California. Domino's has also done a good job of publicizing it. So far, I have seen increases in sales and have had my church and a couple of schools contact me about coming out and doing demonstrations. I have even gotten media calls from as far away as Florida."

Michael Shepherd of Michael Angelo's Pizza in Kenton, Ohio is a two-time U.S. Pizza Team member. Last year, he went as a dough stretcher and this year competed in the dough stretch, fastest pizza maker, team acrobatic and culinary competitions and just missed placing in the fastest pizza maker competition by two seconds. Michael has used the publicity and increased business from last year's participation to open a second location. He isn't the only one. Sean Brauser, who was last year's traditional category team member, has also opened a second location as a result of the publicity he gained as a U.S. Pizza Team member. Michael Speck, owner of Sloopy's Pizza in Westlake, Ohio was also a 2003 USPT member and competed in the culinary and team acrobatic competitions. 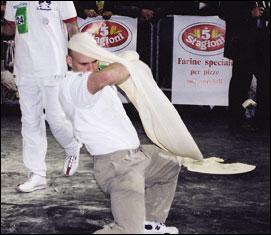 Also tagging along for this year's event was the Food Network, who is doing a segment on the team and World Pizza Competition. The Food Network picked up on the U.S. Pizza Team at the International Food Show in New York and will be airing a segment some time this year. PMQ will let you know when it will air. Also traveling with the team was independent filmmaker Kent Moorehead, who is doing a documentary on the team. We will let you know more about this as details become available.

As you can see, the publicity for the team is snowballing. More opportunities are presenting themselves every week. The team members are also getting some great marketing material out of their participation and thousands of dollars in free publicity. They are finding new opportunities and opening new locations. You too have the same opportunity they now have. Stay tuned to www.pmw.com, www.uspizzateam.com and www.worldpizzachampionship.com for details on next year's team try-outs. They will be bigger and so will the opportunities. And watch out Italy – the Americans are coming back again. 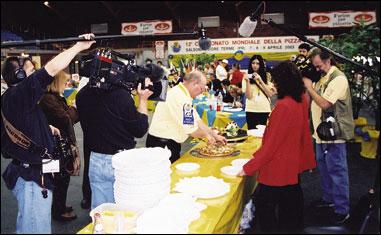 Speaking of next year, PMQ and the U.S. Pizza Team sponsors (Bellissimo, California Milk Advisory Board, CarryHOT USA, La Nova and Wood Stone) would like to invite contestants to tryout for the 2004 U.S. Pizza Team. Winners receive an expense-paid trip to Salsomaggiore, Italy to compete in the World Pizza Championships. Acrobatic tryouts (largest dough stretch, fastest pizza maker and individual dough acrobatics) will take place at the Western Foodservice and Hospitality Expo in Los Angeles, California, August 2-4, 2003. The culinary tryouts will take place in Columbus, Ohio in February 2004. We will have more details about the culinary events as they become available. For more information about trying out for the U.S. Pizza Team, go to www.uspizzateam.com or call 662-234-5481.