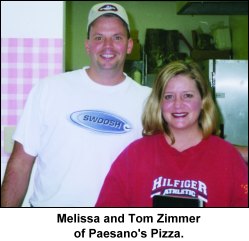 Unless you've been too busy running your pizzeria to watch TV you've probably seen the national campaign by Domino's introducing their CinnaStix and Cheesy Bread. Domino's dedicated a considerable amount of their national advertising budget to making customers aware of their new menu addition. Why? Probably because adding appetizers to an order increases average ticket sales. They reported that more than 20 million orders of CinnaStix were delivered during the promotional period. Why breadsticks? Because they are easy and cost pennies to make thus making them a very profitable menu addition. Here's an example.

Melissa Zimmer is the owner of Paesano's Pizza in Dyer, Indiana, a carryout and delivery pizzeria with a service area of only about 3,000 potential customers. Her average ticket sales were $11.50, but felt she could increase this average by adding a breadstick menu. After adding the breadstick menu, her average ticket sales jumped to $14.23. Her strategy for launching this new menu item was well planned and quite effective.

In June of 2001, she ran a promotion offering a small one topping pizza for $3. Since her advertising strategy consisted of only yellow page advertising, flyers and door hangers she decided to spread the word of the new breadstick menu by offering this $3 pizza deal and including the offer to get a small sample (seven-inch size) order of her new breadsticks for only a dollar more. Paesano's Pizza is located in a strip mall, so to increase awareness before the promotion and get some feedback on the new product she offered samples to other business owners and employees located in the same shopping area to see what their opinion would be. 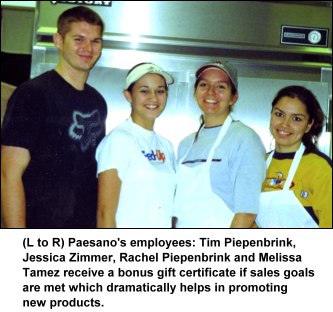 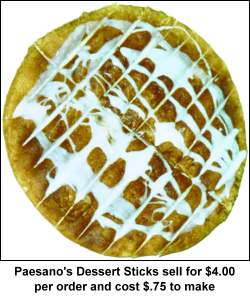 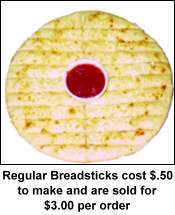 Another strategy she implemented to increase the sale of Paesano's breadsticks is an employee bonus program, which employs suggestive selling techniques. She began by educating her seven employees on why it's important to promote new products. She explained to them that promoting and selling new products helps in meeting the payroll budget and ticket quota that she sets and if those criteria are met, everyone on the staff gets a $25 gift certificate. Gift certificates can be redeemed for movie tickets, music or other things her employees suggest. 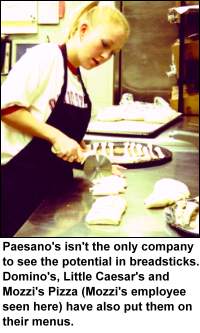 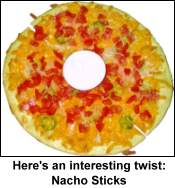 Because breadsticks are relatively inexpensive to add to an order and taste great, customers are open to suggestive selling of the item. Several of the bigger chains have seen the benefits and tried the item out or added it to their menus. Little Caesar's introduced the Caesar Sticks and Domino's started with CinnaStix and is now offering Cheesy Bread.  In a press release Holly Ryan, Domino's public relations specialist, said, "We have seen a significant number of customers purchasing and repurchasing CinnaStix." The press release went on to say that Domino's is projecting the (CinnaStix) giveaway to be one of the most successful promotions for the company in recent memory and "it created a great deal of positive momentum for Domino's Pizza." To read the press release go to www.pmqnews.com/cinnastix.htm. PMQ