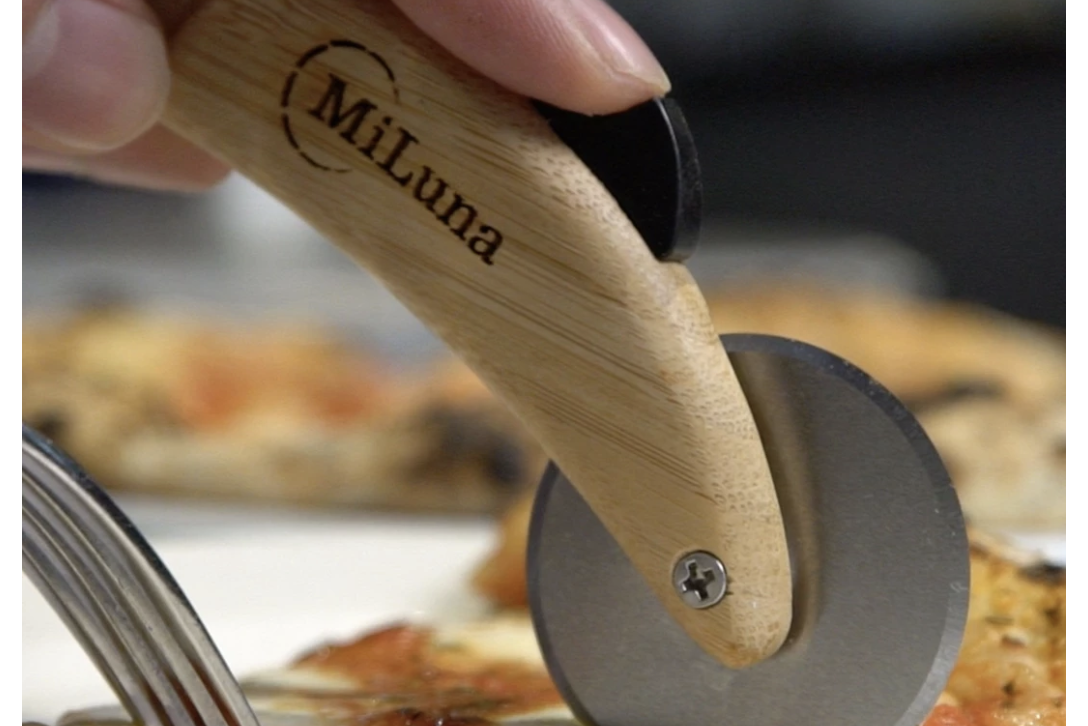 And for them, MiLuna was invented. Its creator, Mark Horton, remembers the lightbulb moment.

“I scribbled down the idea for a personal pizza cutter many years ago, while enjoying a slice with a friend. I watched as she used a fork and knife to saw through her slice, dragging cheese and toppings from the crust. I thought to myself, ‘There must be a better way,'” said Horton.

MiLuna is a small bamboo pizza cutter outfitted with a rubber handle to rest an index finger on during slicing. Paired with a fork, the cutter is meant to glide through pizza easily without dragging the toppings off the pie.  The tool also works well with similarly-shaped foods like pancakes, french toast, crepes, and quesadilla.

Who runs MiLuna? Horton says it’s only himself, his wife, and their 8-year-old son Luke whose official company title is “Little Slice.” (His son is featured prominently in the above video.)

“(He) is the biggest believer in MiLuna — makes me smile,” Horton said. “We all pitch in to do everything from shipping and receiving to sales and marketing.”

Horton said the prototyping process was really fun for MiLuna. One of his friends is an engineer so they worked through the design together.

“We printed countless 3D models before settling in on the final design,” Hordon said, “and sending the file to our factory for sampling, testing, and ultimately production. It’s super rewarding to see what was just an idea, now patented and being used by people other than just me and my family!”

Being based in Vermont, Horton said they struggled to find a local manufacturer that could commit to small production runs while producing samples.

“Fortunately, we have a good friend and partner in Asia that offered an alternative,” Horton said. “We’re now aligned with a wonderful, family-owned-and-operated factory based in China. They are a pleasure to work with and their level of quality and attention to detail is outstanding.”

The product is new to the market, and they are now stocking their warehouse shelves. They began sampling MiLuna at nearby pizzerias in Vermont. Horton said the reception so far “has been fantastic!”

“I had no idea that eating pizza with a fork and knife sparked such controversy,” he said. “I totally get picking up your pizza slice with your hands, but there is a time and place for cutting it into bite-sized pieces, and MiLuna works really well for that. If you’re a parent with young kids and do all the cutting, you’ll most definitely appreciate MiLuna.”

Horton doesn’t have a professional background in pizza other than eating “an extraordinary amount of pizza.”  For the past 15 years, he sold snowmaking equipment to ski resorts. Before that, he co-founded an e-commerce company in San Francisco that sold action sports equipment. Now he and his wife, Kim Horton, are excited to embark on this new entrepreneurship.

“I think MiLuna will forever change the way people eat pizza,” Horton said. “My hope is the knife stays in the utensil drawer and Miluna becomes the natural and obvious alternative for pizza lovers that prefer to use a fork to eat their pizza.”