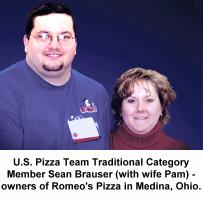 You missed it! If you didn't go to Columbus, Ohio, for this year's Mid-America Pizza Show, you missed it. What was it you missed? First, you missed your chance to win one of three trips to Italy. Second, you missed watching this year's U.S. Pizza Team come together. Third, you missed out on sampling the best pizzas in America as the nation's top pizza chefs competed in the Pizza Pizzazz. You also missed many great new ideas and products that were exhibited at the show. Even with "that other show" taking place on the West Coast, the Mid-America Pizza Show still managed to attract more than 14,700 attendees.

I won a trip to Italy! 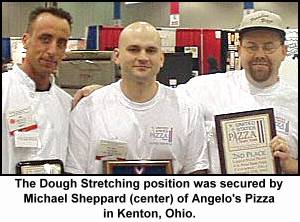 You're probably wondering just what we mean with the "Dreams Come True" headline. Listen to this: "We decided to enter the Pizza Pizzazz competition on the Friday (February 15th) before the competition (which took place on Monday the 18th). That Saturday night I went to sleep and had a dream that we had won the competition…and we actually ended up winning!"

Those were the words of Sean Brauser of Romeo's Pizza in Medina, Ohio, who took top honors in the Traditional Pizza category and won a spot on the U.S. Pizza Team and a free trip to Italy. His creation called "The Butcher Shop" was made with pepperoni, sausage, meatballs and bacon. Second place and $400 went to Craig Preibe of CK's Grilled Pizza in Norcross, GA, for his grilled whole wheat crust, fresh tomato basil sauce, Italian sausage, bacon, mushroom, onions and mozzarella and Parmesan cheese. Third place and $200 went to Scott Cosentino of Good Fella's Brick Oven Pizza in Staten Island, New York, for his roasted peppers, fresh basil, sausage, mozzarella and Romano cheese.

I won a trip to Italy, too! 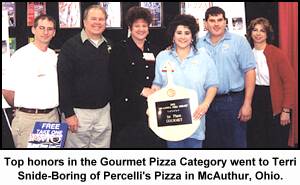 Top honors for the Gourmet Pizza category, held on Sunday, went to Terri Snider-Boring of Percelli's Pizza in McAuthur, Ohio, for her "Greek Supreme" with mushrooms, black olives, special white sauce, three cheeses and bacon. Terri, who has worked in her parent's pizza shop since she was a child, is also an elementary school principal. "This was my fifth year to compete," Terri said. "I had been entering the traditional category, but entered the gourmet category last year. Until now, the best I had placed was third. The competition has inspired me to try new and exciting things." Now Terri is part of the 2002 U.S. Pizza Team. Second prize and $400 went to 2001 winner, Jodie Aufdencamp of Mama Mimi's Take N Bake in Columbus, Ohio, for her "Mama's Favorite Chicken" with roasted garlic, cream sauce, chicken, smoked bacon, roma tomatoes and a mozzarella/ cheddar blend cheese. Third place and $200 went to Michael Amheiser of Pizza Dock in Fredericktown, Ohio, for his white sauce, chicken and cheese pizza.

I won a trip to Italy, three!

The winner of the Dough Stretching category and the third position on the U.S. Pizza Team was Michael Sheppard of Angelo's Pizza in Kenton, Ohio.  Winning Stretch: 24.88 inches. This was a tight competition going right down to the wire. As the last contestant pulled and stretched his dough, it looked as if he had the winning stretch, but one last toss of the dough proved fatal as his dough tore and was disqualified. No guts, no glory. Better luck next year.

Reigning world champion dough thrower and captain of this year's U.S. Pizza Team, Tony Gemignani was present to demonstrate his winning style of acrobatic dough throwing and show potential contestants what is expected in Italy. There were several audience members present asking questions about next year's trials and said they would definitely be back to compete in the Acrobatic Dough Throwing category next year. If you are interested in competing in, or have questions concerning entering next year's trials, contact

Five-time World Pizza Champion Tony Gemignani of Pyzano's Pizza in Castro Valley, California, took a few moments to visually explain to the crowd what the freestyle dough throwing routines will be like in Italy. Tony's dynamically charged acrobatic performance captivated the crowd, and several viewers announced afterward  they would be trying out for the team next year. Tony has received numerous awards and has appeared on several TV shows for his routine, including The Tonight Show with Jay Leno.

"The show is the largest trade event in the region and benefits everyone working in the restaurant industry-owners, operators, chief executive officers, front-line cooks, managers, and food and beverage managers," said show chairman Ann Reichle of Angelina's Pizza in Olmsted Falls, Ohio. "The show is one-of-kind and brings in people from other states including New York,  Pennsylvania, Michigan, Connecticut, Iowa, and Kentucky."

In addition to more than 400 booths, the excitement of the U.S. Pizza Team trials and the Pizza Pizzazz competition, several informative seminars took place. One was the seminar, "Recession Proof Your Pizza Store" where Marc Slutsky, Marc Ankerman and Ed Zimmerman offered their expertise in helping pizza operators stay in business during tough economic times. Big Dave Ostrander was there, too! In his seminar, "Big Dave Unleashed" he shared some of his easy-to-implement tips to beat the competition with guerrilla marketing strategies and savvy. Other speakers included: Jim Cowler, Divisional Vice President of Buca Di Beppo in Minneapolis; Theodore M. Fowler, FMP, President and CEO of Golden Corral Corporation and Chairman of the National Restaurant Association; Dan Young, CEO of Young's Jersey Dairy and several others.

As usual, PMQ scoured the exhibit floor and found the best ideas of the show and have them here for you, but don't let this be a reason to miss the next show. "With the excitement, the free trips to Italy and the U.S. Pizza Team Trials add, this show is gaining momentum and more of a festival-type atmosphere," says Steve Green, publisher of PMQ Magazine. "All of the Pizza Pizzazz competition spots were filled, we had several competitors for the Dough Stretching competition and had a lot of people gathered around watching all of the festivities.  These events add fun to the show." Now let's take a look at the top three ideas from the 2002 Mid-America Pizza Show.

Make messages, logos and images appear, disappear, or change colors with the pour of an ice cold drink. That's right, when you pour a cold beverage into the glass, the temperature change makes hidden messages or logos appear right before your eyes. These are one of the 'koolest' things we've seen in cups. Kool-Koncepts, makers of Kool-Kups, has many different marketing and promotional ideas they can share to help generate customer excitement.

Appetizers are a great way to increase average ticket sales, but the key to selling new appetizers is getting customers to try them the first time. Another problem is installing expensive vents and hoods if you want to offer fried appetizers. Here's one solution to al of your problems. For a limited time, when you buy an AUTOFRY system, you can get up to $3,700 in free appetizers. The AUTOFRY system is a self-contained frying unit and when you purchase one you get dollar for dollar rebates from the following companies: Brakebush ($5000), Anchor Foods ($2,000), Seawatch ($500) and LambWeston ($700). You can use the rebates to offer free samples to your customers and you have an economical frying solution.

Neon-looking signs without the neon price or problem  (Idea 3)

Everyone will admit, neon signs look good, but the problem is neon is expensive and fragile. If you want that neon look, but not the neon price, here's a solution. Menu Master signs by IndoorSigns have a very durable sign that uses colored LED lights to flood an acrylic message area with bright, brilliant color…and it looks as good as neon. Signs can have permanent messages or can be made so you can wipe away the message and write something new. You can set the illumination to be a constant light or make it flash. Colors available are red, blue, green or yellow.