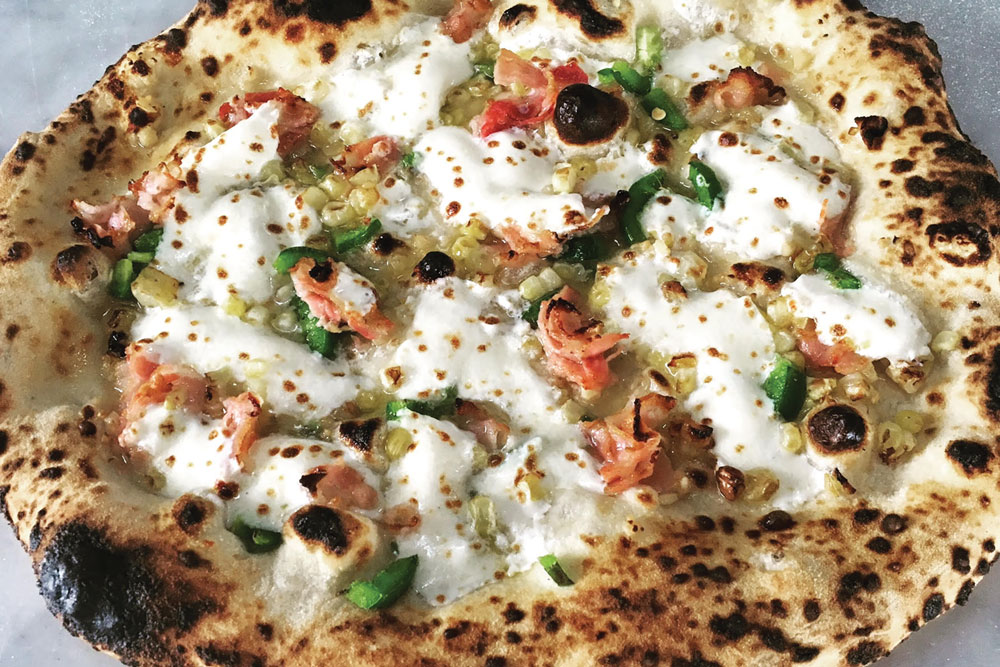 Who says you can’t wear white after Labor Day? Smart pizzeria operators are embracing this blank-slate shade for their pies—offering customers a mouthwatering alternative to traditional red-sauce options and scoring blazing sales to boot. Even better, white pies can incorporate everything from ranch dressing and extra-virgin olive oil (EVOO) to Alfredo sauce and ricotta, making them temptingly versatile for operators and customers alike.

At Dempsey’s Brewery, Pub & Restaurant in Watertown, South Dakota, white pies are prominently featured on the regular menu. But they’re also sold as limited-time specials and on its secret menu, which changes monthly and is featured on Dempsey’s social media and website. During Lent, owner/operator Sean Dempsey considered meat alternatives for pizzas and created for the secret menu the Five Oceans, with fresh mozzarella, basil, green and black Kalamata olives, salmon and feta, all atop a garlic-EVOO base. “It took a while for people to try the salmon pizza, but it’s become very popular,” Dempsey notes. “We use Atlantic salmon, which is mild but still has that distinctive salmon taste, and the other ingredients really complement it.” Dempsey also created Crab Rangoon (with reduced heavy cream, crab, cream cheese and mozzarella, topped with wonton strips) and shrimp-based pies, but he sought an option for those (like himself) who are allergic to shellfish—and the others ultimately turned out to be less successful than the salmon pizza.

“We want pizzas to look as sexy as they taste. You want it to be bright, vibrant and appealing so that when customers see it, they can already taste it. Then they have to order it!”
—Anthony Scalia, Two Bro’s Pizza & Gourmet Pasta

“White sauce is versatile—you can put it on just about any pizza, from veggie to surf-and-turf,” says Anthony Scalia, owner of Two Bro’s Pizza & Gourmet Pasta in Rootstown, Ohio. “You can do anything, even make entrees, with it. It’s a great base.” Here, white pizzas feature olio (roasted garlic-infused oil with herbs and spices) or Alfredo. The Godfather—described as “an Italian sandwich on a pizza”—is topped with olio, provolone, salami, capicola, pepperoni, ham, onions and banana peppers; after baking, chefs toss on a mix of fresh lettuce, marinated tomato and Italian dressing.

As these operators have learned, flavorful meats, veggies and cheeses are allowed to shine when added atop a white base. At Dempsey’s, the Blue Haven combines a housemade blue cheese dressing base, seared rib eye, peppers, bacon, tomatoes and blue cheese crumbles. “I haven’t seen many blue cheese pizzas out there,” Dempsey says. “People either love blue cheese or hate it, but it’s become one of our top-five sellers. And with more flavorful cheeses, you don’t need to add much to get that flavor profile.”

A recent Scalia’s special, the Cajun Black & Blue Bacon Cheeseburger pizza, combines seasoned Angus beef (Scalia presses out patties and rips off chunks, rather than crumbling the ingredient), bacon and a cheddar-provolone mix. After the pie is baked, Scalia’s pizza makers add tomato and lettuce, plus a dusting of Cajun seasoning and a drizzle of garlic aioli or blue cheese dressing, for extra flavor and texture. Or customers can switch it up with the Gyro pie, with gyro meat, tomato, onion and provolone, drizzled with tzatziki sauce. Of course, Two Bro’s also offers its olio and Alfredo bases for create-your-own pizzas.

Looks are important when crafting white pies, so colorful ingredients and sauces are key, operators say. Ken Midkiff, co-owner and fornaio at Anthony’s Pizza in Tupelo, Mississippi, notes that many customers are on the fence about trying white pies, but one recent addition is designed to stand out for both its bold flavors and colorful visuals: The Tuscany incorporates ricotta, oregano, Pecorino, basil, spinach, roasted red peppers, red onions, garlic, mozzarella and a sprinkling of cherry tomatoes; post-bake, a balsamic glaze drizzle amps up eye appeal. “Using ingredients with contrasting colors, in the right amount, makes your pizza really stand out,” Midkiff notes.

When Dempsey and his staff are playing around with new pizzas, they also seek great color combos—for example, fresh basil on the Five Oceans pops against the fresh mozzarella. “The Dirigible Mark IV appeals to vegetarians with a pesto base, fresh basil, pine nuts, light cheese, portobella mushrooms, tomatoes, peppers and onions,” Dempsey says. “After baking, it’s finished with EVOO. On another one with an Alfredo base, we add peppers, sausage, bacon and jalapeños, then drizzle a funky sriracha design on half of it, so diners can choose their heat level.”

Meanwhile, Two Bro’s looks to customers for pie inspiration. The Wampler (named after the customer who ordered it twice weekly), with fresh spinach, marinated tomatoes, banana peppers, portobella mushrooms, pepperoni and extra cheese, eventually made the permanent menu—and is now one of the top-selling Alfredo pies. But presentation remains a priority. “We want pizzas to look as sexy as they taste,” Scalia says. “I try to make sure every pizza that goes out looks like a competition pizza, with perfect topping placement and color symmetry. You want it to be bright, vibrant and appealing so that when customers see it, they can already taste it. Then they have to order it!”

For operators with their eyes (and taste buds) open, inspiration can come from anywhere. Dempsey, who often browses online for ideas, offers these suggestions: “Go to the kitchen and look at your ingredients, asking yourself what you have that you can put together,” he says. “Also, what can you do differently? When we started to throw things together, we made a lot of great pizzas and a lot of god-awful pizzas, but you have to experiment.” For his part, Scalia gets inspired by whatever he’s craving on a particular week; if he’s sampling cheeseburgers or tries a fantastic salad, he thinks, “How can I put this on a pizza?”

Midkiff looks to his staff for new ideas; the Tuscany was invented when he instructed staff members to simply create any pie that used red onion. “Tap the resources and creativity of your people; work with those on the inside,” he recommends. “We have a lot of young people working for us, and they can come up with great ideas!”

Finally, once your pies are in place (and rotating to accommodate frequent specials), ensure that you and your staff are promoting them wisely. In a small town, Dempsey admits he had to educate customers on some of his experimental white pies, ensuring that front-of-house staff was able to explain their differences—for example, that they’re lighter but can also be more complex than basic red-sauce options. Midkiff offers topping tastes to customers unfamiliar with gourmet ingredients like rapini, allowing them to try what goes onto the pie, and posts pics and ingredients on social media and in-store—even hooking customers with samples or small price breaks for new specialty pies.

Scalia also utilizes Facebook, including sponsored posts, to spread the word about specialty and limited-time white pies, often posting on the “pizza of the month” or the “Friday feature.” When recipes have come together a week or two in advance, staff will cook up a couple of the pies on a Friday night and dole out slices to pickup customers, helping build buzz. “In a small town like we’re in, word-of-mouth is huge, and things spread like wildfire,” Scalia laughs. “Though tomato sauce is a classic, olive oil is so much more versatile. I tend to lean more toward the white-sauce pizzas, myself!”