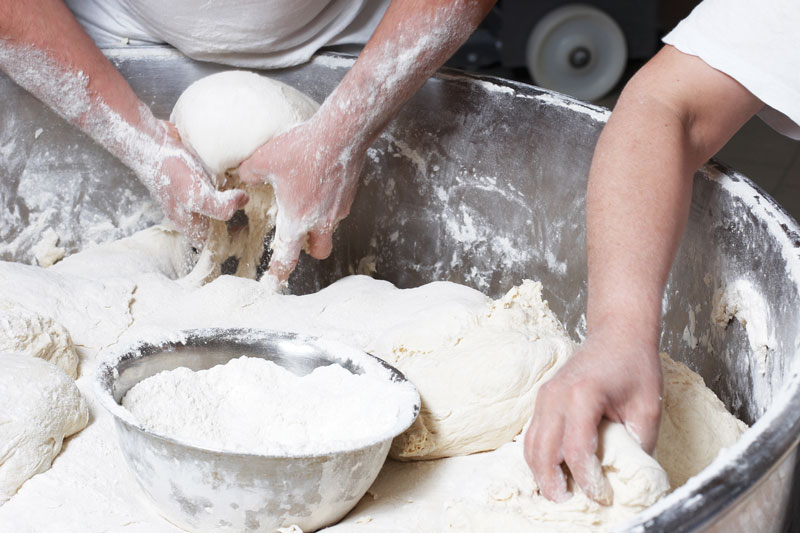 Q Why is it important to control dough temperature during mixing and kneading? The finished dough is headed for the refrigerator anyway, right?

A Finished dough temperature is important for several reasons. Once the dough has been mixed, it should be taken directly to the bench for scaling and balling and placed in the cooler within 20 minutes. Why? Because the yeast in the dough goes through a short (roughly 20-minute) lag phase during which it’s minimally active, but then things kick into high gear, and the yeast begins to actively ferment the dough. The fermentation process changes the density of the dough, due to the development of gas bubbles. These gas bubbles continue to grow and expand as a result of the yeast’s development of carbon dioxide.

If the dough is too warm, the yeast will be more active; if it’s too cold, the yeast will be less active. The dough temperature must be controlled so that you can have control over dough density as the dough goes to the cooler. Dough density has a great impact upon the rate at which the dough cools down. Dense dough cools more easily than gassy or less-dense dough. Once in the cooler, we expect the dough to cool to a point where the rate of fermentation is controlled, allowing us to store it in the cooler for several days or more without it blowing. But if the dough is so warm that the control temperature is not reached within the cross-stack time, the boxes will be down-stacked and sealed with too much heat still remaining in the dough. That means the dough will continue to ferment even while boxed in the cooler!

Add to this the heat of fermentation/heat of metabolism, which creates about 1°F of temperature every hour that the dough is actively fermenting, and you can see how the dough can quickly get out of hand, even in the cooler. By the next day, it will be lost. Additionally, the warmer the dough is when it goes into the cooler, the longer it will need to be cross-stacked if you’re going to have any chance of stabilizing the dough so it can be held in the cooler for a while without blowing or over-fermenting.