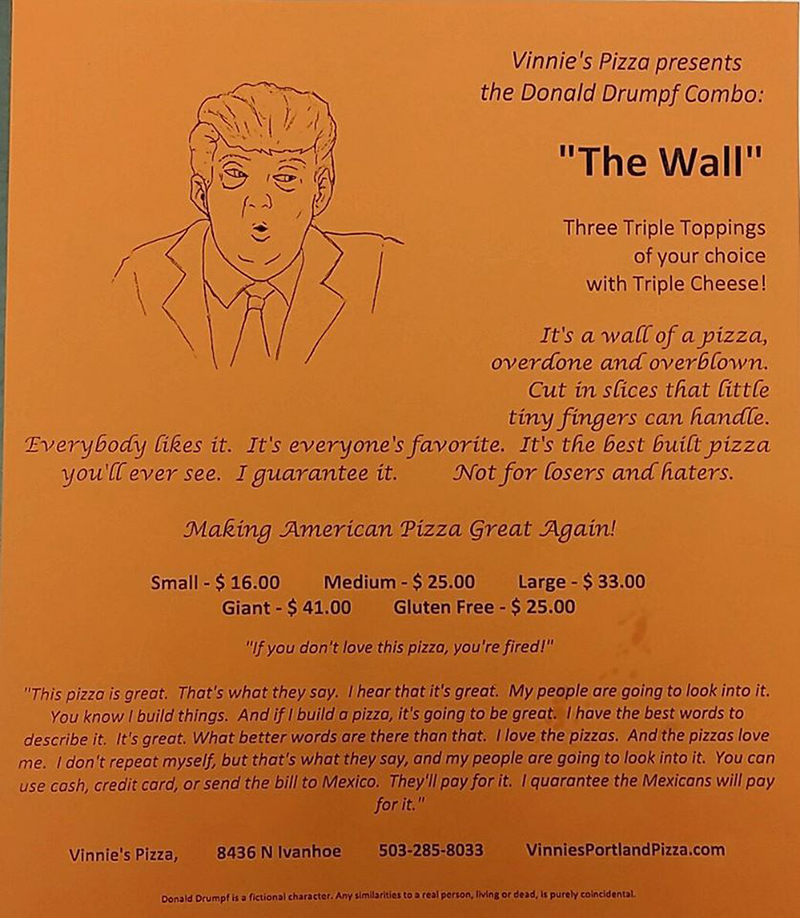 Vinnie’s Pizza in Portland, Oregon, bills itself as the Donald Drumpf Campaign Headquarters, and they’ve got the pizza to prove it: The Wall, a Trump-inspired pie that has been earning online headlines for the past week.

The pizza itself is a combo special loaded with “three triple toppings of your choice with triple cheese.” But Vinnie’s has earned more belly laughs with its hilarious promotional flyer for the pie. Along with a sketch of the Republican presidential candidate, the flyer’s text parodies Trump’s inimitable speaking style with some pretty funny results. Described as “a wall of a pizza, overdone and overblown,” the pizza can be “cut in slices that little tiny fingers can handle,” the flyer says. “Everybody likes it. It’s everyone’s favorite. It’s the best built pizza you’ll ever see. I guarantee it. Not for losers and haters.”

The Trump-style testimonial continues at the bottom of the flyer and ends with a pitch that’s surely unique in the annals of pizza making. “You can use cash, credit card or send the bill to Mexico,” the text states. “They’ll pay for it. I guarantee the Mexicans will pay for it.”

And in case you’re wondering, the “Donald Drumpf” name refers to a gag from the HBO show, Last Week Tonight. John Oliver would likely approve.