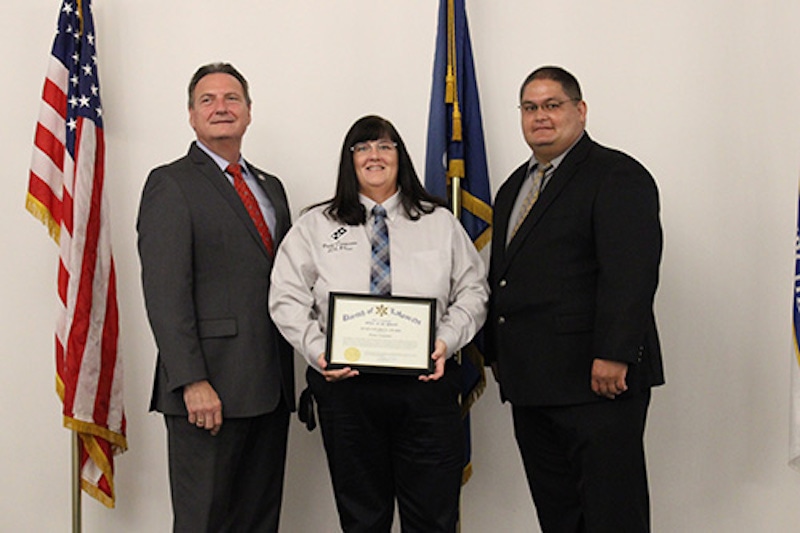 As a child, Penne Carpenter lived in an apartment above the first-ever Domino’s store on Cross Street in Ypsilanti, Michigan. The five-year-old girl caught chain founder Tom Monaghan’s attention early on, when she would take her toy broom and sweep off the sidewalk to make the store look pristine. In return, Monaghan gave her free pizza – and her love for the Domino’s brand hasn’t wavered since.

Today, Carpenter owns Domino’s locations in Cut Off and Raceland, Louisiana, and she’s still representing the brand like a champ. In September 2019, she received the Humanitarian Award from the State of Louisiana Office of the Sheriff for her efforts as a tireless supporter of law enforcement.

“I’ve been working with law enforcement for over 25 years,” Carpenter told Houma Today. “I actually started working with police departments during Night Out Against Crime, where they gave me a list of all the neighborhood parties, and I would go and take free pizzas.”

Penne Carpenter was one of 65 recipients honored for “feats of bravery, exceptional work and dedication to public service,” according to the Lafourche Parish Sheriff’s Office.

“I’ve always wanted to help support the men and women in blue in any way that I could,” Carpenter said in a Domino’s press release. “When I was finally in a position where I could do that, it meant giving back to the community the best way I know how – by feeding people.”

Related: Domino’s just made it even easier to order their pizza

Carpenter moved to Louisiana when she was 13.  She wanted to work at Domino’s because of her close connection to the brand back home, so when a Domino’s store finally opened in Louisiana, she was beyond excited. She started her career with the chain as a manager-in-training in Franklin, Louisiana, in 1985. She worked her way up to general manager, franchise area supervisor, operating partner, regional operations director and regional vice president with RPM Pizza – the local franchisee. In 2017, she achieved her ultimate dream and purchased two Domino’s stores.

She has supported law enforcement throughout the years by providing free pizzas and water for the Police Explorers, a career-oriented program that gives young adults the opportunity to explore careers in law enforcement, as well as the Police Reserves. In addition to helping out during Night Out Against Crime events, Carpenter and her team have also fed officers at various checkpoints, extended searches, and other spontaneous crisis events.

Additionally, one of Carpenter’s employees, Austin Guidry of Cut Off, was named Domino’s National Delivery Expert of the Year in 2018.

“You are quick to respond to requests for help, and your drivers sometimes show up wherever law enforcement may be and deliver several pizzas to make sure our ladies and gentlemen wearing the badge are taken care of,” Craig Webre, sheriff of Lafourche Parish, said during the presentation of Carpenter’s Humanitarian Award certificate. “You go the extra mile not only here, but sometimes even outside Lafourche Parish.”

“It doesn’t take much to give back to the community that continues to support me,” Carpenter said. “I love what I do, I love the Domino’s brand and am happy I can continue to build relationships in the communities that we serve. Receiving the Humanitarian Award was such an honor. My team and I look forward to another great year of community outreach.”