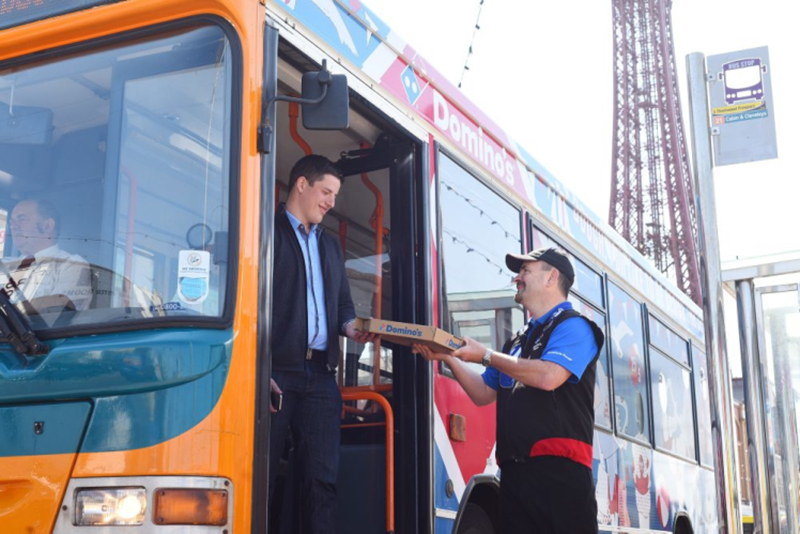 Traveling by bus in Blackpool, England, just got a lot more delicious. Domino’s now offers pizza delivery service to that city’s No. 22 bus route from Mereside to Cleveley—and only to No. 22.

Known as the Catch-22, the route has been singled out by Domino’s for a unique trial program, and if it proves successful, other routes could be added, according to the Blackpool Gazette. Passengers can place their orders online or by phone, and Domino’s will send a delivery person with the pizza to the stop of their choice along the route.

“Blackpool has a solid track record of being at the forefront of new and big ideas,” the Gazette article states. “We’ve built a giant tower, opened what was at the time the tallest and fastest roller-coaster in Europe and continue to attract tourists from around the globe with our world-famous illuminations. And now, unlike anywhere else, our bus passengers can order pizza from the comfort of their seats—and have them delivered to their chosen stop.”

Aaron Ryder was the first Catch-22 passenger to place an order. “I was on my way to a lunchtime shift at work when the bus driver announced the new delivery over the tannoy,” he said, in a statement issued by Domino’s. “I love a Mighty Meaty pizza so I was straight on the phone to see if I could get it before my journey ended. I did, and it was delicious.”

Domino’s was reportedly inspired by music producer DJ Artwork, who earlier this year ordered a ham and pineapple pie while on a five-hour ride from Glasgow to Sheffield and picked it up at his next stop. “We like a challenge at Domino’s, so after successfully delivering pizza to a train, we wanted to go one step further and offer people pizza to a bus,” company spokesman David Woods said. “Those aboard the Catch-22 can curb their hunger by ordering a fresh, tasty pizza whenever and wherever they want.”

So what’s next? A large pepperoni delivered to an aircraft carrier in the Indian Ocean? Hey, you never know, Helen Tosney-Collins, communications manager at Domino’s Pizza Group, told the website Mashable.com. “Our customers regularly ask us to deliver their hot, fresh pizza to weird and wonderful places, so we’re open to suggestions,” she said.