Domino's Now Has 155 DXPs on the Road - PMQ Pizza Magazine 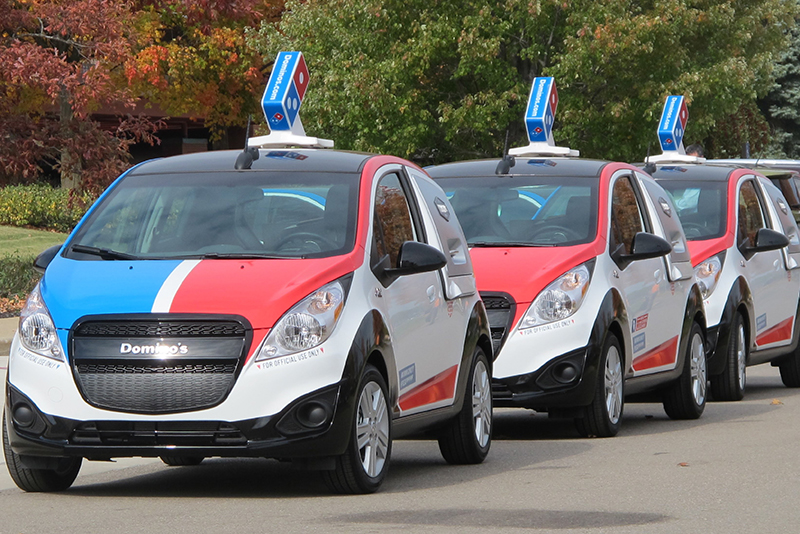 Domino’s Pizza announced last week it will roll out an additional 58 DXP delivery cars in 23 markets around the U.S., bringing the total number to 155.

“The DXP demonstrates Domino’s passion for pizza delivery,” said Russell Weiner, president of Domino’s USA, in a press release. “The excitement around it has been incredible, which is why we have such a great demand for even more.”

The DXP’s special features include a built-in warming oven, a reconfigured interior that holds up to 80 pizzas, and special compartments to hold side items and sodas. “The DXP has caught the eye of our customers and franchisees alike,” Weiner said. “It’s real, it’s functionally superior, it’s gorgeous and no other brand has anything like it. So when people ask, ‘Did Domino’s really build a car made just for pizza delivery?’ I say, ‘Oh, yes, we did.’”

We had a few more questions, though, so we talked to spokesperson Jenny Fouracre:

Barrett: How much do franchisees pay for the DXP?

Barrett: Will Domino's offer financing to help franchisees buy the cars? Are they being leased?

Barrett: How many DXPs is each franchisee projected to purchase? Will one be enough? Is it mostly for marketing?

Fouracre: All Domino’s franchisees were able to purchase a DXP if they wanted. For this second wave, 22 franchisees purchased one or more DXPs, for a total of 58 DXPs. Some franchisees felt that one car would be enough, some felt they needed more, but all of the DXPs will be excellent representations of the brand and excellence in pizza delivery.

The DXP is a fantastic marketing piece, but it was built to make the delivery experience as positive as possible for Domino’s team members and customers. It was built with pizza delivery in mind—a warming oven, perfectly designed spaces with skid-free surfaces to hold pizza, special drink holders, dipping cup space, a puddle light—everything a driver would need to make the best delivery possible. Domino’s is passionate about delivery, and the DXP demonstrates that.

Barrett: Why is the DXP designed to hold 80 pizzas? Is this for catering? Most customers won't want to wait for 79 pizzas to be delivered ahead of theirs.

Fouracre: The DXP was designed to hold up to 80 pizzas for special deliveries such as large orders to schools, businesses and special events. This allows Domino’s drivers to make one trip for large deliveries instead of multiple trips.

Barrett: Most importantly, how will the DXP specifically help franchisees sell more pizza?

Fouracre: When we started developing the DXP, we asked ourselves, ‘What would the perfect pizza delivery experience look like?’ We wanted to create something that didn’t exist before. The DXP allows Domino’s drivers to do their jobs with greater ease and efficiency. It has a warming oven that opens with the touch of one button. It has a puddle light to illuminate drivers’ walkways. It has a car topper that lights up when it’s out on delivery. It’s a real, professional, purpose-built delivery vehicle, and it’s eye-catching. It shows that we’re passionate about getting the best quality pizza to our customers, and I think customers will notice that. Domino’s will do whatever it can to give customers the best experience possible, and the DXP is a prime example of that.

To view a behind-the-scenes video on the making of the DXP, visit dominosdxp.com