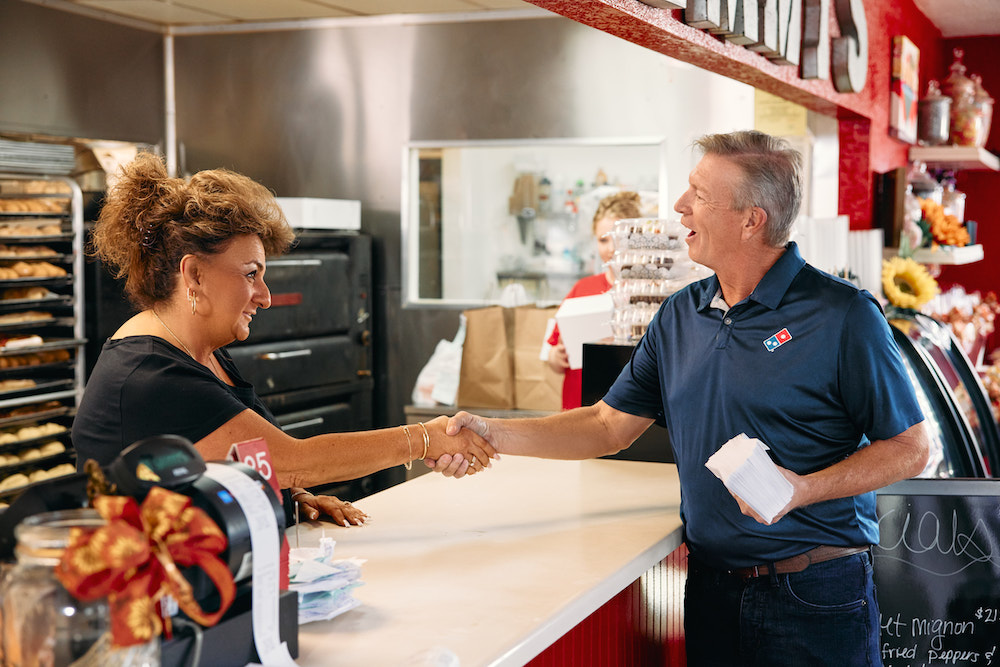 Related: Why these pizza chains work with third-party delivery platforms

Domino’s might be the largest pizza company in the world, but it’s still comprised of ordinary people with hearts and souls. That’s one takeaway from a recent campaign in which several Domino’s franchisees and one corporate-owned store did their part to help other local restaurants grow their business.

At the same time, the chain seized the opportunity to take a swipe at third-party delivery platforms and their fees. Domino’s is one of the few major chains that still handles all delivery in-house rather than working with companies like Uber Eats and Grubhub.

According to Domino’s, more than 95 percent of its hundreds of independent franchise owners started out as delivery drivers or pizza makers for the chain. They know how hard it is to run a business, and they see the impact that high fees from delivery app services have on small restaurants.

With that in mind, participating Domino’s stores across the Greater Boston, Phoenix, Louisville, Denver and Laredo, Texas areas recently bought thousands of $50 gift cards from small, locally owned restaurants. The Domino’s franchisees stuffed the gift cards into their own delivery boxes and dispatched them to randomly selected customers. This gesture of goodwill encouraged Domino’s customers to use the gift cards by ordering directly from the local restaurants so they could avoid delivery app fees.

These local Domino’s stores gave away more than $100,000 worth of gift cards from locally owned grills, taco places, barbeque joints, bakeries, delis and more, to roughly 2,600 customers throughout early November. Several Domino’s franchisees and local restaurant owners were interviewed for a corporate video (below) that spotlighted the campaign.

“Running a restaurant is tough. Our franchisees benefit from being part of a brand that has operations and technology built for delivery,” said Russell Weiner, Domino’s chief operating officer. “However, many small restaurants don’t have a system for delivery. Meanwhile, third-party delivery apps are charging local eateries high fees to deliver, which are taking away much of their earnings. Domino’s and its franchisees were inspired to pay it forward in these communities by helping drive business to a few neighboring restaurants—without the substantial fees.”

Related: How to make third-party delivery work for your pizzeria

The pandemic has forced independent restaurateurs to ink deals with third-party delivery companies or lose a lot of business due to rising demand for food delivery. “Owning a restaurant over the past year and a half has been incredibly brutal,” said Irene Li, owner of Mei Mei in Boston, Massachusetts. “We love that Domino’s has supported other restaurants and driven their customers to these mom-and-pops that can really use the help.”

One of the local mom-and-pop eateries that benefited from the campaign even has pizza on its menu. “I can’t believe one restaurant is buying another restaurant’s gift certificates to give out, but it sure is wonderful,” said Vickie Corder, owner of Grammy’s Goodies in Wheat Ridge, Colorado, which dishes out pizza, pastas and other Italian fare.

The video concludes with a forceful message about third-party companies: “High delivery app fees hurt customers and local restaurant owners. Help your local restaurants thrive by ordering directly from them.”