“We’re Rolex guys, not Timex guys,” laughs Jeff Good, managing partner at Mangia Bene, a three-restaurant group in Jackson, Mississippi, that includes Sal & Mookie’s New York Pizza & Ice Cream Joint (salandmookies.com). “We’re better doing something more complex, with more moving parts.” Sal & Mookie’s, indeed, has a plethora of moving parts: a full-service adult lounge, the Pi(e) Lounge; an ice cream operation that offers seemingly endless combinations for kids and adults alike; and a diverse menu that extends far beyond your typical New York pizza joint. Combine the wide range of food and beverage options with abundant community service measures and marketing that extends from an iPhone app to a yearly carnival for charity, and you have a thriving New York-style pizza business that is flourishing where most would least expect: in the heart of Mississippi’s capital.

Diversity in the Workplace

One aspect of Sal & Mookie’s that immediately strikes customers is the sheer variety of available food and beverage items. “We have the most diverse menu because we manage our product very well,” explains Andrew Robertson, service manager. “We have 18 to 20 signature pizzas, plus thousands of possibilities for a build-your-own; 12 signature ice cream desserts, plus thousands of possibilities, with our 48 flavors of ice cream; 18 nonalcoholic mocktails built from scratch; and a full dessert menu.” Robertson also points to the dozens of draft and bottled beers, arranged on the menu by type (wheat ales, lagers, fruit beers, etc.); and 62 choices of sauces, cheeses, meats, veggies and seafood for pizza, from traditional favorites (anchovies and Genoa salami) to exotic premade combinations (New Orleans olive salad and wild mushroom ragout with pancetta, for example).

“We don’t use a lot of raw ingredients,” says Dan Blumenthal, co-owner and executive chef for Mangia Bene. “We use vegetables that are cooked and have flavor—grilled eggplant, caramelized onions—which builds pizza in a better way. We’re not just taking ingredients and slicing them.” Not surprisingly, the combination of gourmet-type toppings and huge New York-style pies (Sal & Mookie’s offers only two sizes, 14” and 18”) is a unique idea that sets the pizzeria apart but initially posed challenges. “We wanted the classic New York style and look, and to bring in the gourmet pizza element, so we’d have pizzas that pushed $20 to $30. I didn’t know whether it would work, and we had to adjust when we fi rst opened and people were ordering seven- and eight-topping pies that cost $50!” However, after some tweaks, the owners found that people were more than willing to pay the price for quality ingredients on pies that could easily fill a tableful of people, with leftovers to spare. 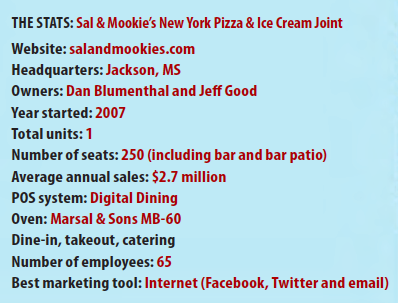 Besides the range of pizza and ice cream indicated in the restaurant’s name, Sal & Mookie’s also offers appetizers, soups and salads, traditional submarine sandwiches, panini, burgers, pasta and a full kids menu. During weekdays, slices (taken from 18” pies) are offered during lunchtime hours, with three options each day: one tomato-based, one cheese-based, and one vegetarian (the last option is often served on the pizzeria’s whole-wheat crust). Robertson also mentions a little-advertised lunch special that performs double-duty for the restaurant: Any customer who enjoys a lunchtime slice in the Pi(e) Lounge will get his 11th slice free. “This loyalty program increases business and helps with overflow from the restaurant so we can cut down on wait time for sit-down customers, and it fills up a space that is often underutilized at lunch,” he explains.

Something Out of a Movie

The overall concept for Sal & Mookie’s was the brainchild of both Good and Blumenthal. The best friends from high school already owned two concepts under the Mangia Bene umbrella: Bravo! Italian Restaurant and Bar, an upscale eatery with wood-fired pizza and an impressive wine list; and Broad Street Baking Company and Café, a bakery with sandwiches, breakfast and a coffee house. Good wanted to create an ice cream parlor, and Blumenthal wanted to get involved in a pizzeria, so they melded the two together for Sal & Mookie’s. Good credits Blumenthal, however, for the vision of New York-style pizza. “In our market, outside of chain pizza, there wasn’t anything,” Good explains. “Dan’s concept of traditional, large-format New York-style pizza wasn’t being addressed.”

Blumenthal came up with his unique concept after growing up in the Northeast and going to culinary school in the 1980s, when gourmet pizza was up-and-coming in California. But the inspiration behind the Sal & Mookie’s moniker came from a unique source: a Spike Lee movie, Do the Right Thing. The movie takes place in a pizzeria, with the two main characters named Sal and Mookie. “It rolled off the tongue and evoked a New York feeling,” recalls Blumenthal. The “New York Pizza and Ice Cream Joint” part even followed the theme, because any production of Lee’s is called “A Spike Lee Joint.” The two-name theme also fit with the restaurant: Sal was envisioned as the pizza guy, Mookie became the ice cream guy, and the business’s logo features the two fictitious characters in cartoon form. Good has also followed the motto “Do the right thing” when it comes to bettering the community. He decided to open the business in the Fondren Historic District in Jackson, a growing arts and entertainment district in midtown that—at the time of opening in 2007 and to this day—is in a transitional area. The restaurant would fi ll a hole in both the neighborhood’s growth and in the city’s pizza scene. “I thought it would be a gift to the city to invest in this area,” says Good. “Part of making a community healthy is economic activity, the chance for jobs. For us, it’s become a calling card—to do the right thing. It’s much more than just food; we’re teaching culture.”

Today, Good takes pride in the fact that the restaurant has become a meeting place for people from all walks of life, whether they’re customers or employees. “We really have become part of the community fabric,” he beams. That includes taking part in the monthly Fondren After 5 arts walk, for which Sal & Mookie’s provides entertainment for attendees, as well as holding unique events such as when, in 2009, a Mountain Dew “mobile tasting lab” drove up to the restaurant to give customers a taste test to help determine the next flavor of the popular soda.

The pinnacle of this community involvement happens every April when Sal & Mookie’s hosts its annual Street Carnival. The event was held for the fi rst time in 2009, when the owners were looking for a way to celebrate the business’ second anniversary. “We thought, ‘What can we do to differentiate ourselves?’” remembers Robertson. “Since we’re family-oriented, we thought, ‘Let’s do a carnival’; then, ‘Let’s do a benefit.’ We’ve been so blessed to have the customer loyalty we have, what could we do with our influence to try to raise money for someone else?” The company decided to raise money for a charity that was right across the street—the Blair E. Batson Hospital for Children. In its inaugural year, more than $1,000 was raised for the hospital; this year, that amount doubled, and nearly 500 attendees enjoyed silent auctions, a dunking booth (in which both Blumenthal and Good participated), children’s games such as bobbing for apples, three pizza eating contests and three ice cream eating contests (each featured two kids and one adult category). “It’s a wonderful opportunity to have community involvement; and, in the end, for any business, community involvement is the key to really sustaining yourself,” says Robertson. “It builds name repetition and product recognition, and many are willing to follow others who help out the common man.” 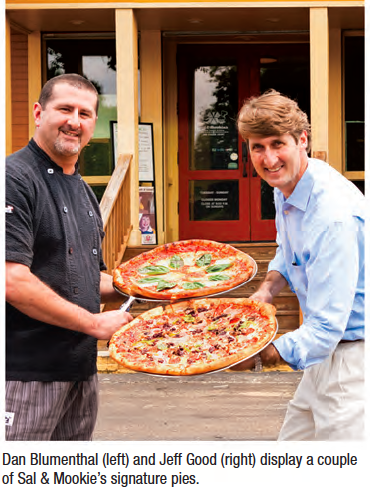 Despite the success of Sal & Mookie’s, and the fact that Good and Blumenthal have been Jackson restaurateurs for 16 years, you won’t find them relying only on word of mouth to advertise the business. For example, Good sends out a regular newsletter to customers on the Mangia Bene email list (addresses are garnered through comment cards, which each customer receives at the end of a meal). “Email marketing has been a natural for us; it’s something we can very quickly put together and get out to a large amount of folks,” says Good. “We’ve collected addresses over the last decade, and when we send something out, we make it topical and, if we can, make it fun.” To wit: When employees at the Mangia Bene restaurants began hearing questions about the safety of seafood in the wake of the Gulf oil spill, Good was able to send out a newsletter that addressed the issue.

Sal & Mookie’s has also been very active on social media sites, including Facebook and Twitter. “We have more than 2,000 followers on Twitter, and our Facebook fan page has 3,000 followers,” notes Robertson. “Facebook allows our customers to have interaction, and people can post pictures and comments; Twitter allows us to have immediate interaction with customers.” An employee at the Sal & Mookie’s pickup window may send a tweet that he’s open for pickup orders, or give a deal to the first customer of the day. Conversely, if a customer tweets about a bad experience at the restaurant, Robertson can immediately respond and work out a solution instantly (saving that customer from complaining to dozens of his friends over six months’ time).

One of the most progressive facets of the Sal & Mookie’s marketing plan is an iPhone app, which customers can download for free and allows them instant access to the Mangia Bene family of restaurants. The app allows customers who have iPhones to check in on current events, daily specials, pictures posted by the restaurants, and more. “The iPhone app is a wonderful tool because it feeds directly off our website,” relates Robertson. “We can also use it for marketing purposes, such as offering an Internet coupon, which costs us no money or extra effort. We can say, ‘Show your iPhone at the restaurant and get 15% off your meal.’”

Good points out that the app allows customers to see the menu and place an order, and phone lines are freed up because customers aren’t calling in to ask about daily specials (customers who don’t have an iPhone can find all of the same information on the website). “We’re trying to reach people in ways they want to be reached,” says Good. “We keep it relevant and keep it fresh, and people love it because there’s value and it’s genuine.” All of the managers at the restaurants have iPhones so that they have the capability to use Facebook and Twitter right from the dining room, posting pictures and updates as necessary.

The owners and managers at Sal & Mookie’s have plenty of experience in doing the right thing—for their business, for the community and for their customers. With three years of pizzeria experience under their belts, they’ve already had plenty of offers for franchising, additional locations and licensing agreements, but they believe in preserving the quality of their business rather than diving into unchecked expansion. However, they always keep their ears open for those who come to them with ideas. In fact, for those who come to him for advice, Good provides a simple rule: “The No. 1 thing is to answer the phone.”