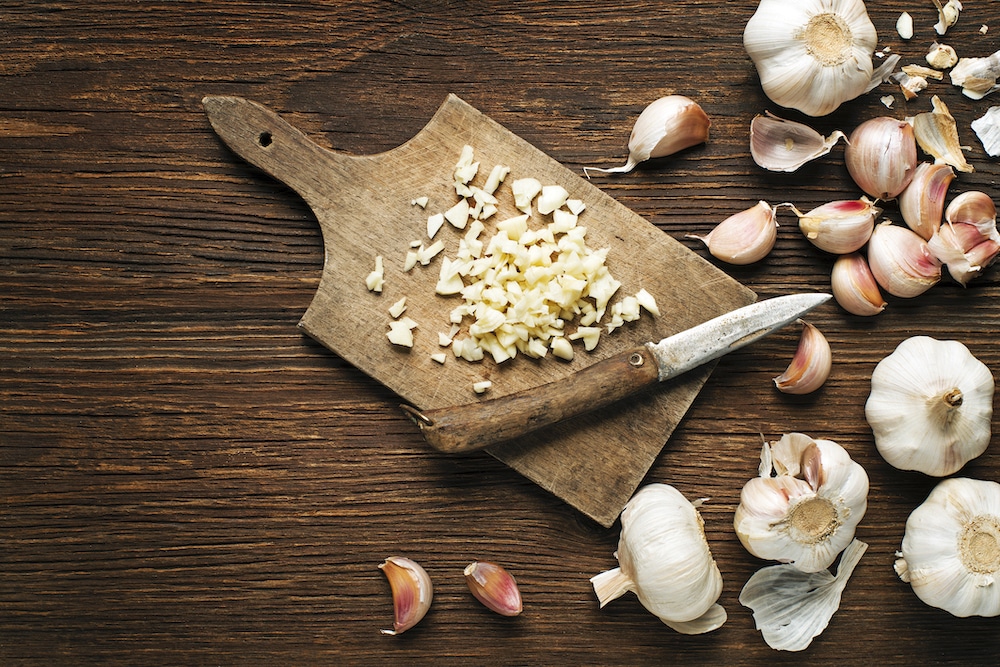 More than a mainstay in the pizzeria kitchen, garlic has long been the reputed superhero of the plant kingdom. It was said, in medieval times, to ward off vampires, prevent the plague, arouse a fair maiden’s passions and cure whooping cough. Modern research has tamped down expectations for garlic to an extent—rare is the would-be Lothario who would use it as an aphrodisiac today—but studies suggest that the organic compound allicin, which gives garlic its rich flavor and aroma, may be the world’s most powerful antioxidant. It may also have antibiotic properties and help reduce blood pressure and cholesterol levels.

Not bad for a humble bulb known to many by that most unappetizing sobriquet, “the stinking rose.”

Intensely tasty and versatile, garlic also plays a pivotal role in virtually every regional cuisine in the world, from Asian and European dishes to African and Latin American fare. It’s certainly a must-have for pizzerias, according to Richard Shinault, director of culinary operations for Brixx Wood-Fired Pizza, a regional chain with stores in North Carolina, South Carolina, Virginia, Tennessee, Ohio and Alabama. “I think it’s 100% necessary, a key flavoring,” Shinault says. “It’s in 80% of our menu items.”

A Relative of the Onion
Love it or hate it—and most Americans seem to love it—you have to admire the versatility and durability of garlic. A marvel of evolution that likely originated in Asia, it’s a hardy plant that matures even through winter snows and comes in hundreds of varieties, including pinks, purples, reds and stripes. It’s usually planted in late October and harvested in July or August, enduring the worst extremes of weather that Mother Nature can dish out. A typical bulb yields between 12 and 16 cloves, which also serve as seeds to produce even more garlic.

A member of the lily family and a relative of the onion, garlic has an illustrious medicinal history dating back to the Egyptian pharaohs, the Greeks and the father of medicine himself, Hippocrates. Louis Pasteur touted its antibacterial powers in 1858, and explorer-physician Albert Schweitzer is said to have used it to treat amoebic dysentery during his travels in Africa. Medics in both world wars employed it to prevent gangrene in soldiers’ wounds.

But garlic’s culinary applications are no less venerable and universal, with pizzeria chefs opting for garlic in recipes that span virtually the entire menu. Mixing granulated, minced or chopped garlic into pizza dough, for example, lends an additional dimension of flavor to the finished crust. It figures prominently in most sauce recipes and roasted garlic cloves have become a trendy topping as well.

Types of Garlic
Americans typically see only one type of garlic in their local supermarkets: a plain-white, plump and tasty bulb called the artichoke garlic. In fact, there seem to be more types of garlic in the world than experts can count—estimates range from between 400 to more than 600 cultivated sub-varieties, depending on whom you ask.

But all garlics fall under the species Allium sativum and include two subspecies: Ophioscorodon (hard-neck) and Sativum (soft-neck). Here’s a brief overview of these two subspecies:

Soft-Neck Garlics: Soft-necks are recognized by their white, papery skin and an abundance of cloves, which often form several layers around the bulb’s core. The commonly found artichoke variety of soft-necks ranges in flavor from very mild—such as the Simoneti and the Red Toch—to the somewhat more potent Inchelium Red and Susanville to the highly potent Chinese Purple and Purple Cauldron. A second soft-neck variety, the Silverskin, is often used in decorative braids and usually has a strong flavor with considerable heat.

Hard-Neck Garlics: More colorful than their soft-neck counterparts, hard-necks, which include the Rocambole, Purple Stripe and Porcelain varieties, generally provide the deepest flavors with the fewest cloves. Rocamboles, for example, pack a lot of heat along with a slightly earthy, musty taste. Versions of the Purple Stripes, such as Chesnok Red and Persian Star, are said to make the sweetest roasted garlic. Porcelains generally have a robust flavor and can be stored for up to 10 months or longer at room temperatures.

Ready for your next culinary adventure in garlic? Try this tasty recipe from our friends at DeIorio’s. 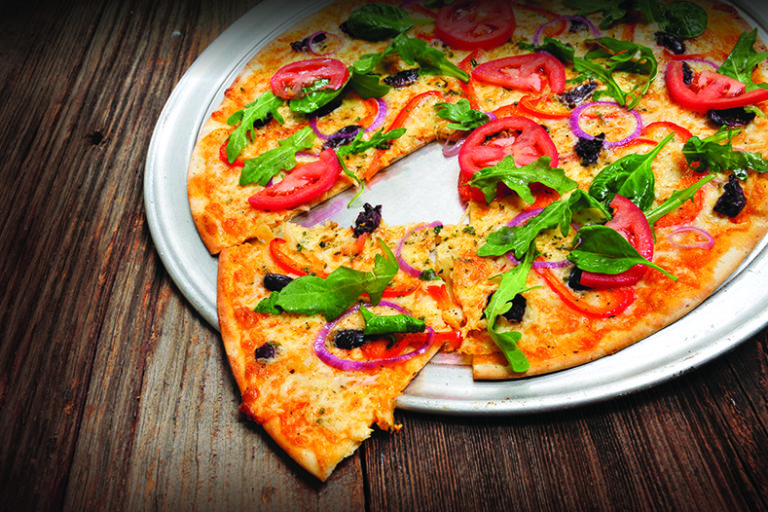 Instructions:
Preheat oven to 400°F. Place the thin-crust dough shell on a pizza screen. Brush the entire surface with olive oil, including the edges. Measure hot sauce into a small dish; press fresh garlic into the hot sauce and combine. Brush the area that will be covered by cheese with the hot sauce/garlic mixture.

Spread out a layer of mozzarella cheese. Artfully arrange the red pepper strips, purple onion slices and Kalamata olives. Season with salt, pepper, parsley flakes and garlic powder, making sure to cover the edges. Slide onto a pizza brick and bake until mozzarella begins to bubble. Remove from oven when the cheese bubbles begin to show a hint of brown. Add tomato slices and field greens. Slice and serve.

Editor’s note: An expanded version of this story appeared in the May 2012 issue of PMQ Pizza Magazine. It has been edited and condensed for website publication.