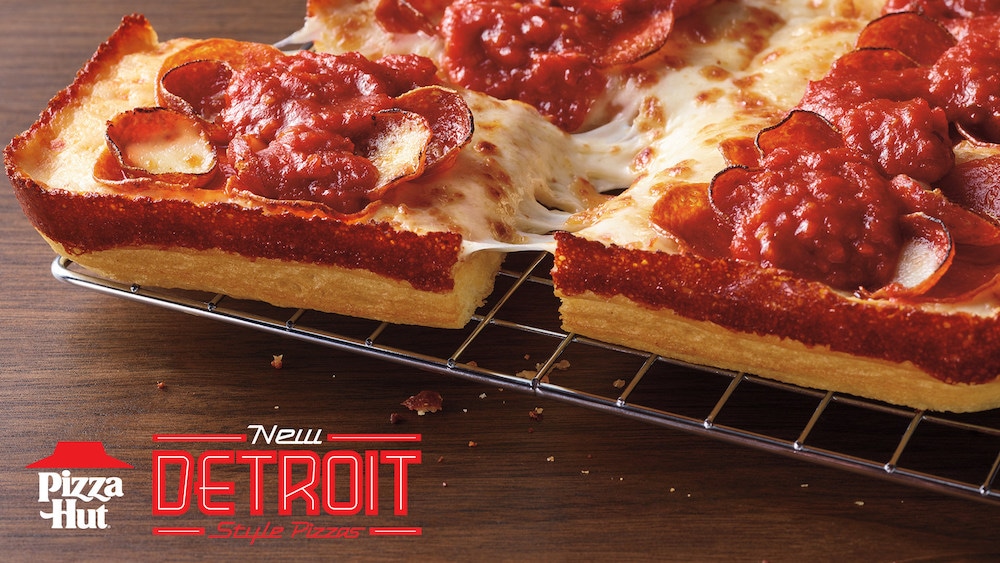 In its biggest launch for 2021, Pizza Hut is taking Detroit-style pizza nationwide with a limited-time offer announced on Tuesday. Prices for the new specialty pies start at $10.99, and the offer launched on Tuesday, January 27.

The chain will offer four varieties of Detroit-style pizza, complete with the prerequisite rectangular shape and cheese piled all the way to the edges of the crust. Pizza Hut’s blog described the Double Pepperoni as “a work of pizza art” with 80 pepperoni slices, including 32 regular slices as well as 48 slices of crispy, cupped pepperoni, “which provides a crunchy texture and zesty flavor.”

Other versions include the Double Cheesy, layered with aged Parmesan and mozzarella; the Meaty Deluxe, loaded with bacon, Italian sausage and cupped pepperoni; and the Supremo, topped with Italian sausage, red onions and green bell peppers.

Packaged in a special box that describes the Detroit style through graphics and text, all four pizzas are topped with a new, richer vine-ripened tomato sauce exclusive to the Detroit-style LTO. Pizza Hut tested eight different versions of the sauce “before finding the perfect taste,” the blog states.

“Countless hours were spent testing and perfecting every detail here to create our take on Detroit-style pizza,” David Graves, Pizza Hut’s chief brand officer, said in a statement on the blog. “The caramelized cheese crust and the sauce on top take the taste of this pizza to the next level.”

Related: Pizza Hut rolls out two plant-based pizzas with toppings from Beyond Meat

During a virtual preview of the new Detroit-style pizza for the media, Graves said the style “is the fastest-growing trend in pizza: It’s no longer a Midwest-only thing,” according to Nation’s Restaurant News. “As America’s iconic pizza company, when there’s a big trend, our customers expect us to bring those pizzas to the rest of America.”

So what do Motor City denizens think about it? Susan Selasky of the Detroit Free Press said she tried the Double Pepperoni, which “smelled wonderful and looked delicious.”

Selasky said she “loved the two different pepperonis and … there was a lot of them.”

“It had that tomatoey aroma, but it was a little too much sauce for my liking,” she wrote. “The tomato flavor was strong … The crust was what [I] expected. It was thick, a little chewy but not heavy and airy in the center. It also had the lacy edges.”

In a generally positive review for Uproxx, Dane Rivera said the Pizza Hut version of Detroit-style pizza “will never live up to the real thing.” He noted that it uses standard mozz instead of Wisconsin brick cheese and isn’t baked in “actual repurposed automotive pans like legit Detroit pies.”

But Rivera said the new tomato sauce blend is “an improvement over Pizza Hut’s original sauce, with a zestier and brighter flavor. It’s less herb-filled than Pizza Hut’s typical sauce, much chunkier, and has a more tomato-forward flavor, which is perfect because (considering the layering of this pizza) the sauce is as much a topping as anything else. Biting into a slice, we’re greeted by the brightness of the tomato sauce, which gets grounded once our teeth seek into the cheese, layers of pepperoni, and the cushiony crust. The crust’s exterior is crispy and toasty—think Pizza Hut’s pan-style—with a thick, chewy center that satisfies after a single slice.”

Rivera did complain that 80 pepperoni slices “are just way too much … The first layer of pepperonis never really crisped up like the top layer, leaving soggy, flappy pepperonis, which weren’t a problem initially but became much more noticeable once the pizza started to cool.”

Rivera’s final verdict? “So it’s not legit Detroit-style pizza, but with travel shut down, who cares? It’s something new and different from a fast-food space that lacks innovation, and it’s easily Pizza Hut’s best product since their original Pan Pizza. In fact, it just might give the OG pizza a run for its money, flavor-wise.”