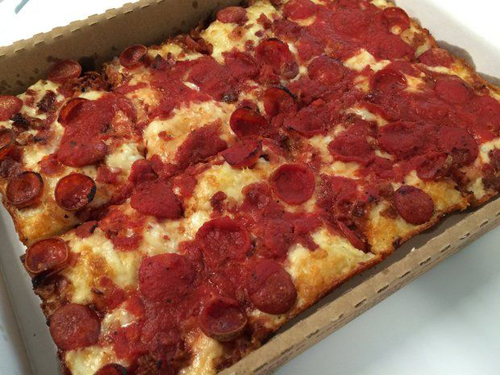 Detroit may be best known for three things: Henry Ford, Motown and pizza. Now you can get all three as Buddy's Pizza in the Motor City launches its Motown Museum Pizza.

Mlive.com reports Buddy's is adding the Motown Museum Pizza to its Motor City collection, which debuted in 2011, and features pies named for Henry Ford pie, The Detroit Zoo, The Parade Company (organizing parades and special events) and Detroit Institute of Arts. If you "didn't hear it through the grapevine," the pepperoni, bacon and cheese blend Motown Museum Pizza pizza, flavored with Buddy's original sauce, took the stage at all 11 Buddy's locations, starting June 26. This groovin pie features pepperoni on top of the cheese instead of underneath like most of Buddy's pizza stars..

For each Motown Museum pizza sold, Buddy's will donate $1 to the Motown Museum in support of the continued preservation of Detroit's musical heritage. As an added bonus on Motown Fridays, $2 for each Motown Museum pizza purchased will be given back to the museum. Buddy's began in Detroit 69 years ago. Once a month through the end of the year, customers can use their free anniversary customer cards to purchase an 8-square cheese pizza for $6.90 and add extra toppings for 69 cents each.

Read more about how Buddy's Pizza and the Motown Museum are making sweet music together.