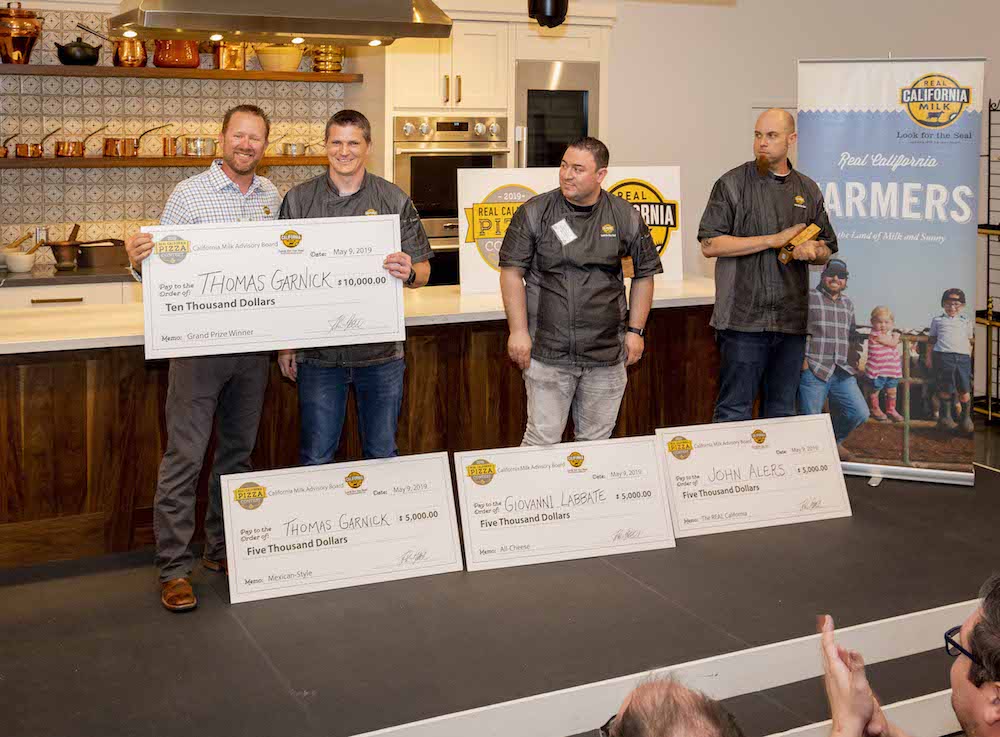 Eleven chefs spent a competitive day crafting and working pizza dough, developing unique toppings and sauces, and combining innovative blends of California cheese for the May 9 event, produced by the California Milk Advisory Board (CMAB).

In addition to Garnick, two other pizza makers won their categories—Giovanni Labbate of Bricks Wood Fired Pizza Café in Schaumburg, Illinois, and John Alers of Flour and Barley-Brick Oven Pizza in Las Vegas.

Garnick won the contest for his Bandera de Fusion pizza in the Mexican-Style category. This pizza, inspired by the Mexican flag, included pork carnitas, salsa verde and mole and featured four California-produced Hispanic-style cheese and dairy products: Oaxaca, asadero, cotija and crèma Mexicana. Garnick received $5,000 for winning the category and an additional $10,000 for the grand prize distinction.

Labbate won the All Cheese category with his pizza called Harvest. A New York-style pizza, it was topped with kale, butternut squash and caramelized red onions and showcased California-produced mozzarella, fontina and Parmesan.

The contest, awarding prize money totaling $25,000 for the most innovative use of cow’s milk cheeses from California and made with Real California Milk, was open to professional chefs and culinary students across the U.S.  The contest was held at The CIA at Copia, The Culinary Institute of America’s epicurean destination in Napa, Calif.

Nine professional chefs and two culinary students competed in the national finals. Chefs represented restaurants and food companies from California and as far away as New Jersey, Texas, Ohio and Washington, with two culinary students representing the Culinary Institute of America in St. Helena, Calif. and the Columbus Culinary Institute at Bradford School.

Entries were evaluated by three culinary professionals—Barbara Alexander, executive chef and consulting partner for The Culinary Institute of America’s consulting division; Glenn Cybulski, certified pizzaiolo and award-winning executive chef; and Scott Weiner, founder of Scott’s Pizza Tours in NYC. The judges based their blind evaluations on a variety of factors, with a focus on the innovative use of cheeses made with Real California Milk.

“The pizzas created today really showcased the innovation happening in the pizza category,” said Mike Gallagher, business and market development consultant for the CMAB. “The judges were impressed by the creativity represented in the recipes as well as the culinary skills demonstrated in bringing those recipes to life, from the selection of raw ingredients through to the final bake.”

“We were excited to see the diverse choices of cheeses used from throughout California,” said CMAB CEO John Talbot. “As the top producer in the United States, we were expecting to see plenty of California-produced mozzarella, but we were also pleased to see so many non-traditional varieties like ricotta, asiago, blue, dry jack, and white and garlic cheddar. And because we included a Mexican-style recipe category, we saw some delicious combinations of great Hispanic-style cheeses—from Oaxaca, queso fresco, asadero and cotija to crèma Mexicana. It is this kind of creativity and variety that California cheeses have become known for and we are thrilled that these chefs are making such good use of it.”

For more information on sourcing cheese from California, please contact the foodservice team at 209.883.6455 (MILK), businessdevelopment@cmab.net or RealCaliforniaMilk.com/Foodservice.