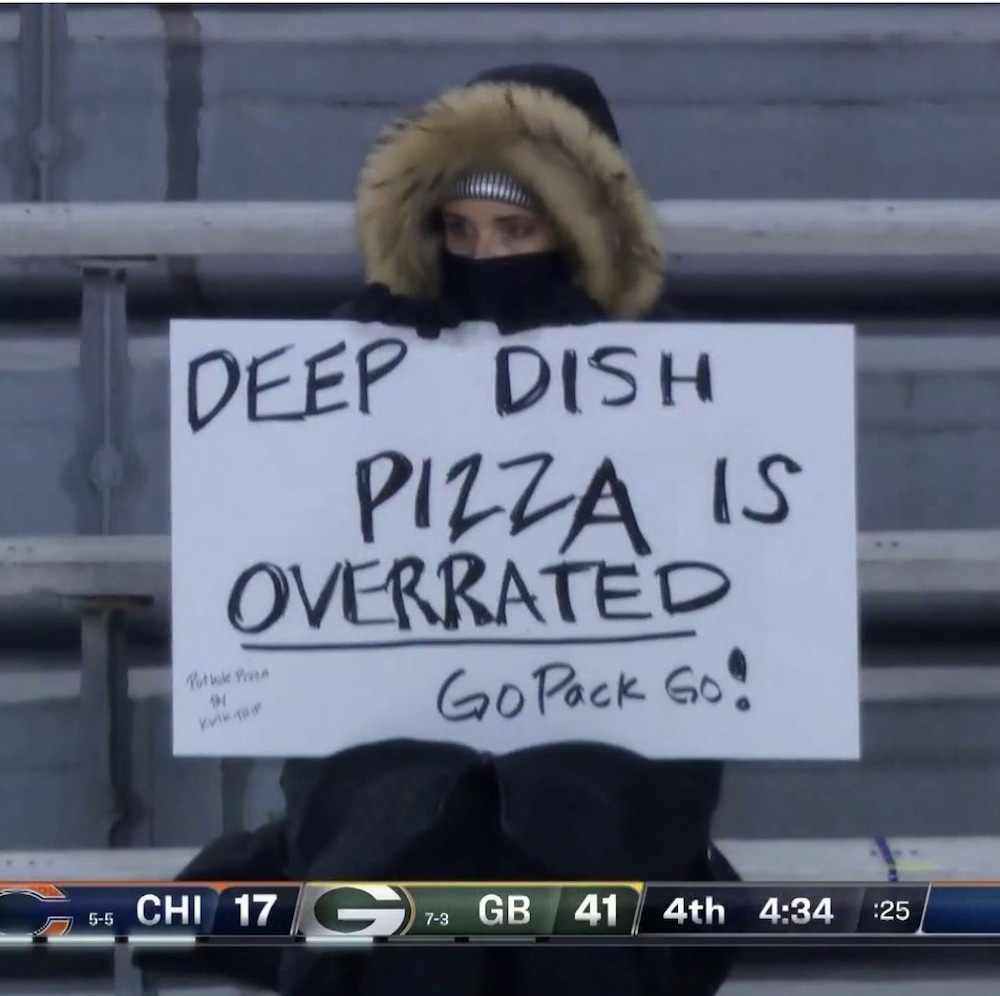 Who in the world would ever claim that deep-dish pizza is overrated? A sign expressing that sentiment went semi-viral after Sunday night’s NFL matchup between the Green Bay Packers and the Chicago Bears—but there was a little bit of method to the sign-waver’s madness.

The Packers gave their long-time rival a 41-25 shellacking, but a fan sign that read, “Deep Dish Pizza is Overrated. Go Pack Go,” won the social-media game, as it racked up nearly 3,000 reactions on Facebook and nearly 37,000 likes on Instagram. Intended as a lighthearted jab at Chicago’s famous pizza style, the sign was shared on Sunday Night Football on NBC’s social media accounts with a simple one-word caption: “Discuss.”

And discussion ensued, most of it amiable, although some of the comments were a bit mean-spirited, as one would expect on social media in 2020.

Regardless, Joan Malcheski, the person who was holding the sign, isn’t complaining. According to the Green Bay Press Gazette, Malcheski is the brand and marketing director for the Packers. “I had no idea I was on camera, but then, all of a sudden, my phone started blowing up,” she told the newspaper.

As it turns out, the idea for the sign came from Malcheski’s Twitter followers. While watching the game, she asked fellow Packers fans what kind of message she should send out from her seat in the freezing-cold stadium. She said she tweeted the request “with the hashtag #keepitclean because I wanted to represent the fun and rivalry and not make it ugly.”

She liked the proposed deep-pan jab enough to hunker down with a coworker at halftime to handwrite the sign with a marker. Eventually, the sideline cameras spotted her, and the sign and its tongue-in-cheek message was broadcast to the world.

In fact, Malcheski said she doesn’t have any serious problem with deep-dish pizza, but she does have an opinion. “Overall, I think always the cheese should be the star of a pizza,” she told the Press Gazette. “It should be on top.”