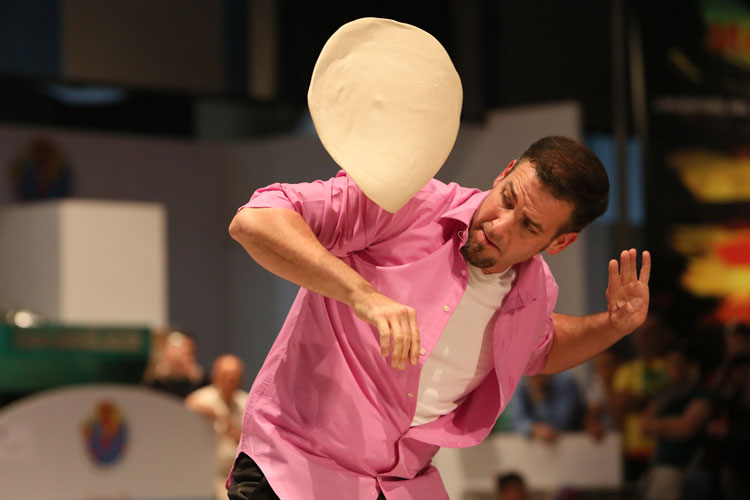 Suddenly, I knew this would be a trip to remember.

It was May 22, and I was standing in line with members of the U.S. Pizza Team (USPT) at John F. Kennedy Airport in New York. The team’s 17 members—along with a supporting cast of another dozen or so—were renewing friendships and greeting newcomers at the boarding gate for Parma, Italy, host city of the World Pizza Championship (WPC), which brings together 600 competitors from 20 nations in 10 events. As U.S. pizzaioli Bradley Johnson and Jamie Culliton, wearing black USPT jackets with white numbers, tossed their Throw Dough in the air, a crowd of travelers—smiling, cheering and clapping—formed a semicircle around them. The audience members started peppering the USPT teammates with questions about the adventure ahead, and it hit me: Experienced reporter that I am, having covered presidential visits and other breaking news, I said to myself, “This is a big deal.”

Later, as we settled into our seats and the plane taxied toward takeoff, a flight attendant made an announcement over the intercom. “Ladies and gentlemen, we’re honored to welcome aboard some special guests: The U.S. Pizza Team.” As the applause faded, I knew that—although I was coming along primarily as a reporter and observer—I was wearing my own USPT jacket with as much patriotic pride as anyone in that crowded cabin.

“Win or lose, I’m proud of my teammates and proud to be competing for America.”
—Lenny Giordano, Mona Lisa Pizzeria & Ristorante

Getting Better Every Year

During the grueling eight-hour flight from New York to Milan, I chatted with veteran and first-time USPT competitors. Making his second consecutive trip to Parma, Michael LaMarca, owner of the Chagrin Falls, Ohio-based Master Pizza (masterpizza.com) chain, said he looked forward to improving his WPC score this year. But the pizza entrepreneur, who would be competing in the Classica, Pizza-for-Two and Pizza-in-Teglia events, was equally motivated to learn from the Italian masters of pizza. “Certainly I’d love to finish in the top three in my events, but I view this trip primarily as a learning opportunity,” he said, over the steady hum of the Airbus’ engines. “I’m here to fine-tune my ability—and help my teammates—to ultimately deliver what the Italian pizzaioli, who mostly judge the competition, are looking for in championship-quality pizza.”

LaMarca and fellow USPT veterans, like his Staten Island-based Pizza-for-Two partner Lenny Giordano, were fully committed to supporting and advising new team members as they baked, topped and stretched against their international competitors. “Our style of pizza making is different in America,” said Giordano, owner of Mona Lisa Pizzeria & Ristorante (monalisasi.com) in New York. Born in Sicily and fluent in Italian, the jocular New York-style pizza specialist says U.S. pies generally feature bolder sauces and thicker crusts compared to standard Italian pizza. But returning USPT members have been schooling themselves on Italian techniques. “We get better and learn more every year that we come over,” Giordano added. “But win or lose, I’m proud of my teammates and proud to be competing for America.”

Then there’s rookie Chris Mallon, a large man with a stylish black beard who fancies colorful bandanas for both cooking and traveling. As he struggled to get comfortable in the cramped seats of the Airbus, Mallon, who would compete in the Pizza-for-Two and Classica events, had the look of a pirate thirsty for pizza combat and new adventures. Backed up by a five-person crew of Five Points Pizza (fivepointspizza.com) shipmates from Nashville, including lawyers-turned-owners David and Tara Tieman, Mallon welcomed the challenge ahead. “I’m naturally competitive, but I feel surprisingly calm,” he mused. “I have a comfort level with cooking—especially making great, honest pizza that the people of Nashville really love.”

Mallon was trained as a high-end restaurant chef, but he prefers the no-nonsense camaraderie of Five Points and its proven formula of award-winning pizza and craft beer. “My Five Points colleagues made it possible for me to compete at this high level by supporting me in the qualifying competitions,” he noted, as he scribbled notes to himself about his competition pizza, featuring Gorgonzola and buffalo mozzarella cheeses, truffle cream and balsamic vinegar. “We have an awesome shop in Nashville led by David and Tara and driven by people who really want to be there,” Mallon adds. “My co-workers are into pizza making so much that they’ve volunteered to travel with me and assist me in every aspect of this competition.”

Outside of Milan, the beautiful Italian Alps projected a snow-capped backdrop as rolling hillside pastures and vineyards sped past our windows, marking the road south to Parma. Known as Italy’s food valley, this region earns its nickname, producing an abundance of world-class cheeses, olives and wine. With bags unpacked and room keys accounted for, team members devoted their first afternoon in Italy to scouring Parma’s markets. They sniffed artisan cheeses and picked through olives, prosciutto, basil and oregano, determined to entice Italian judges with customized local pizza offerings.

Then it was off to Verona, hometown of Romeo and Juliet, followed by the beautiful lakeside town of Bardolino, where USPT members twirled Throw Dough on the sparkling waterfront and visited La Conchiglia Bardolino (laconchigliabardolino.com), a pizzeria owned by WPC judge Giuseppe Conte. The pizzaiolo warmly greeted his fellow pizza makers in his parlor, fragrant with the scents of baking dough and basil. The expressive Italian shared insights on competing against the home team. Using a fresh slice of classic Neapolitan as a prop, Conte handed out technical tips on flour quality, maneuvering around the pizza peel, oven etiquette and sanitary protocols. He also explained how to behave around the competition judges. “Keep it real,” he urged. “Act like you do at your own place. Your body language is important. The key to winning is to be comfortable while preparing your pizza—demonstrate that you’re having fun.”

The American visitors listened carefully, watching Conte’s every movement, hanging on every word. It was all good advice, they knew, but, under the glare of the bright stage lights, with all the pizza world watching, “keeping it real” would be easier said than done.

On the competition’s opening day, the USPT members climbed off the bus and strode, in unison, through the parking lot. Their steps resonated with purpose, and every face reflected quiet determination. In the auditorium, hectic prep work in the crowded staging section was punctuated by staccato bursts of animated Italian, French, even an occasional smidgen of Arabic. Uniformed pizza makers from various nations wielded their knives expertly, chopping and dicing veggies and meats.

As pizza culinary events began in front of a bank of superheated pizza ovens, the competitors continued stretching dough, spreading cheese and saucing crust. The USPT teammates worked quickly but coolly, bearing up under the scrutinizing stares of the judges. With finished pizzas in hand, they presented their pies to the judges, who poked, prodded and, finally, tasted each pie. The final results would not be revealed until the awards banquet on Wednesday night; without any feedback from the judges, competitors—such as Rick and Jane Mines, a husband-and-wife team who competed together in Pizza-for-Two—were left to second-guess themselves and fret about what went wrong. “Jane made a beautiful pie with great, fresh ingredients and taste-tested complementary flavors like lamb, fresh basil and black olives,” said Rick, who co-owns Nima’s Pizza (nimaspizza.com) with his wife in Gassville, Arkansas. “Unfortunately, I slightly overcooked the crust on the darn thing.”

Will Shaw, representing Pizza Bogo (pizzabogo.com) in Olmstead, Ohio, had it even worse. His carry-on bag, with all of his crucial ingredients, had been stolen en route to Parma. Forced to work with some local flour he’d hurriedly purchased, he watched helplessly as his gooey dough crumbled and broke apart when he began stretching it. “I was disappointed, sure,” Shaw admitted later. “But my teammates picked me up and let me borrow some of their ingredients. I pressed on to Pizza-in-a-Pan, where I was very proud of my final product.”

Old-fashioned team camaraderie pulled him through, Shaw said. “The thing I’ll always take away from this experience is the professionalism and generosity of my teammates. Without thinking about it, they had my back when I needed them, even though technically we were competing against one another. It’s pretty inspiring.”

Meanwhile, Samantha Jones, co-owner of two Mellow Mushroom (mellowmushroom.com) stores in Chattanooga, Tennessee, and her assistant manager Bradley Johnson collaborated on a unique Pizza-for-Two entry, the Puttanesca, featuring a garlic and anchovy sauce accented with chili peppers, artisan tomatoes, black olives and capers. “Bradley and I went for simplicity in our competition pizza, deciding on this rustic Italian dish-turned-pizza after we taste-tested it at our store,” Jones explained.

Going simple—and trusting in her intuition—worked for Jones before. Naysayers questioned her judgment when she picked out the original downtown Chattanooga Mellow Mushroom site in a crumbling section of town. But the area made a comeback, and the pizzeria’s urban hippie brand and craft beer menu helped make her store the biggest-selling pizzeria in Tennessee at one point.

And for Jones, making delicious pizza wasn’t the only role she would play in Parma. She would soon emerge as a candidate for top performer in a supporting role.

A Little Something Extra

While errors and happenstance plagued some USPT members, their teammate Jamie Culliton of St. Petersburg, Florida, pulled off a nearly flawless routine in the opening round of the Individual Pizza Acrobatics category. Clad in a bright-pink shirt and white fedora, Culliton juggled pizza dough to the pulsating rhythms of Bruno Mars’ “Uptown Funk” and flat-out stole the show. Varying his routine with over-the-shoulder, between-the-legs and flat-on-his-back moves, the confident Sunshine Stater—who captured the silver medal in last year’s event—quickly advanced to the second round while his USPT buddies wildly cheered him on. “I knew I performed well, but I also knew I’d need a little something extra for the championship round,” said the dapper pizza dancer and USPT acrobatics coach.

That “little something extra” was his friend and teammate, Samantha Jones. In the middle of his second-round Acrobatics competition routine, Culliton surprised—and wowed—the audience by suddenly turning to Jones, outfitted in an elegant black gown, and pulling her onto the floor. The two joined hands and danced as their teammates shouted their approval and the crowd applauded enthusiastically. Later that evening, Culliton found himself in the winners’ circle again, celebrating his second straight silver-medal victory in a boisterous, happy scene. “To hear my teammates cheering me on made me proud to be an American pizzaiolo,” he said later. (Culliton ran a close second to first-place winner Takumi Tachikawa, who impressed the judges with his dramatic, highly nimble routine set to synchronized techno beats.)

In the end, Culliton was the team’s only top finisher, but USPT members’ pizzas earned high praise behind the scenes from the mostly Italian judges, and final scores in the culinary categories were up dramatically from the previous year. Second-year competitor Leah Scurto, executive chef at Pizza My Heart (pizzamyheart.com) in Los Gatos, California, believes the team is getting closer to medal contention in the pizza making events. “Even though we haven’t won any culinary awards, I’ve walked away both years feeling enriched, invigorated and having learned something,” she said. “Between making new friends, visiting new cities and eating incredible food, I think the trip was a success. Regardless of scores, I think that having the guts to travel to Italy to participate in an incredibly tough pizza competition makes us winners in our own right. My biggest takeaway is that we need to cater more to the Italian palate.”

For me, the World Pizza Championships was a thrilling, emotionally rewarding experience. The teamwork, pride and perseverance on display are qualities that will live on in the memories and hearts of a remarkable group of American pizza professionals. They are among those fortunate few who do what they love and are superb at what they do—and for one magical week in an Italian food paradise, they shared that passion with the world.