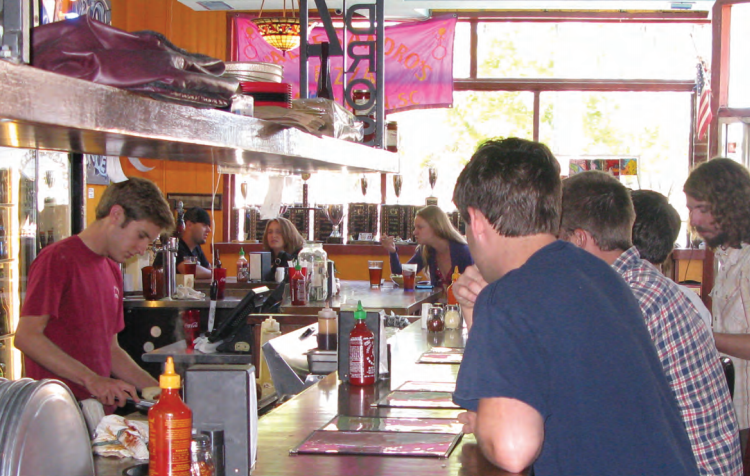 Pizzerias often rely on a unified theme to bring customers in; positioning themselves as a family-friendly atmosphere or a sports-viewing destination can help create the recognizable image and brand of the restaurant. For years, pizzerias have perfected the art of selling themselves as a side dish to their pizza—a profitable strategy. Occasionally, though, a pizzeria abandons this marketing idea, ditching the flair and detaching itself from any single theme. This kind of pizzeria relies solely on its pizza’s ability to act as a people magnet, and the rest just seems to fall into place.

Two Philadelphia-born twentysomethings, fresh out of college and living in Charleston, South Carolina, took the Field of Dreams approach to starting a pizzeria. Not “If you build it, they will come,” but something equally fundamental: “If the pizza is good and the beer is cold, they will come.” And, since 2006, come they have—in droves—to D’Allesandro’s Pizza (229pies.com) in the Elliotborough neighborhood of downtown Charleston, South Carolina.

Like many other graduates, brothers Ben and Nick D’Allesandro didn’t know what to do after college. After finishing his studies at the College of Charleston, Ben convinced Nick, a graduate of Temple University in Philadelphia, that the sparse pizza selection in Charleston created the perfect environment for a business venture.

For Ben, the decision to open a pizzeria in Charleston simply made too much sense to pass up; he thought the addition of a pizzeria with a creative menu would be a hit in Charleston. “I love pizza,” Ben enthuses. “I made pizzas all throughout college, and I’ve been eating it my whole life. My brother and I had just graduated and we thought, hey, why not give it a shot?” This entrepreneurial spirit and commitment to making high-quality, gourmet pizzas have made D’Allesandro’s a favorite with Charleston’s large market of college students (nearly a dozen colleges exist in or around Charleston) and the city’s constant flow of tourists.

Nestled inconspicuously on the corner of Bogard and St. Philip Streets, D’Allesandro’s commands little attention. A few neon beer signs flicker in the window while the muted tones of trendy music float out to the sidewalk, mixing with the aroma of baking pizzas. One could easily walk by and not notice what’s going on inside. But once through the door, customers are welcomed by a hodgepodge decor: Chalkboard art hangs on the walls, and trophies from unknown competitions are displayed with an obvious indifference to any strategic interior design. Customers can sit at the bar or at a booth and watch while young pizza makers toss homemade dough and apply toppings liberally. It’s the type of place where a bar-sitting patron can carry on a conversation with the pizza cook while the pie is made just inches from his or her sweaty pint glass. There’s a sense of intimacy to D’Allesandro’s; by the time you eat your pizza, you feel almost as though you’d cooked it yourself.

Customers come in and out constantly. Some arrive and leave quickly, just stopping in for a beer to remedy the burden of heavy and humid Charleston air. Not just any beer will do, though: A clear refrigerated case displays over 20 import and artisan beers in bottles, and draft beer is also available. Crowd favorites such as Blue Moon and Yuengling fill up pitchers and pints for thirsty customers. Wine and soft drinks add further beverage variety, but the libations serve only as a complement to what Charleston residents regularly call the best pizza in town.

The true secret to their success: a variety of creative pizza combinations made with quality ingredients. Choices range from basic cheese to a loaded five topping supreme. Nick favors the Get Gnarly pizza, with balsamic-marinated chicken, spinach and blue cheese—reminiscent more of a gourmet meal than a pizza. Meanwhile, Ben says The Chaucinator is D’Allesandro’s biggest seller—a twist on a Margherita pizza, minus the tomatoes and with a double helping of pepperoni. However, customers are encouraged to improvise and create their own masterpieces by choosing from any of the 30 sauce and topping choices. In fact, at D’Allesandro’s, any pizza creation can end up on the menu. “Customers and employees are always experimenting with new pizzas. If it sticks and people keep asking for it, it becomes a mainstay,” Ben says.

Pies come in 10”, 12” and 16” sizes, and fifteen sandwiches made with bread from a bakery on nearby James Island are also available in 6” or 12” sizes. Panini sandwiches called CalJoes and chicken wings round out the menu. Eight reasonably priced lunch combinations are available every day and include a can of soda or a house salad. D’Al’s, as the locals call it, also has a happy hour every night of the week from 4 p.m. to 8 p.m., offering pizzas and subs with a pint for a discounted price.

D’Al’s also offers a popular free delivery service to the Charleston peninsula, an area that includes residential and commercial districts along with large numbers of university students living in on-campus housing.

Ben admits that the marketing strategy for D’Allesandro’s is hardly groundbreaking. “We benefit most from positive word of mouth,” he says. When asked about business challenges in downtown Charleston, Ben can only complain about a lack of parking, but because Elliotborough is more of a pedestrian area, it doesn’t affect business too much. “We’re in a residential neighborhood, so foot traffic is always steady,” he says.

D’Al’s owners certainly know how to capitalize on their accessibility in the Elliotborough neighborhood. They’ve played host to Halloween costume parties and trivia nights, and have featured live music as part of a block party-type celebration. “Those were great ways to get people in the restaurant,” Ben says. “Events like that help people associate D’Allesandro’s with having a good time.”

For now, the D’Allesandro brothers are content running just one pizzeria, but don’t count out a second location in the future. “We’re always thinking of ways to make the pizza better,” says Ben. “In this business, it’s necessary to be forward-thinking, and we’re always saving our money in case we want to open another location.”

Although D’Allesandro’s has enjoyed sustained success since its 2006 opening, the D’Allesandro brothers have had to deal with a few unexpected obstacles in the restaurant business. “Equipment maintenance is a never-ending battle,” Ben admits. “We didn’t know our equipment would require such constant upkeep.” Likewise, the D’Allesandros have some advice for fellow pizzeria operators or those wishing to get into the business. “Keep up with your taxes,” says Ben. “If you aren’t setting money away for when tax season comes around, it can really sneak up on you!”

Ben and Nick are also quick to note that their survival depends greatly on the quality of employees they hire. “We try to hire unique and outgoing employees. We have a large clientele of young people, so it’s important for us to hire people that fit the attitude of our restaurant,” Ben points out. (True to word, a mohawk-sporting waiter pleasantly circled the restaurant the day PMQ stopped in for a slice.)

D’Al’s is more than a pizzeria; it’s part watering hole, part social hub. In this unrefined pizza joint, hipster students mingle over pies while camera-wielding tourists hike from the posh shops on King Street and the picturesque views of the famed Battery in search of Charleston’s most popular pie. The D’Allesandros, meanwhile, simply continue to enjoy and develop the unique combination of menu, employees and vibe that seems to please everyone who walks in the door.