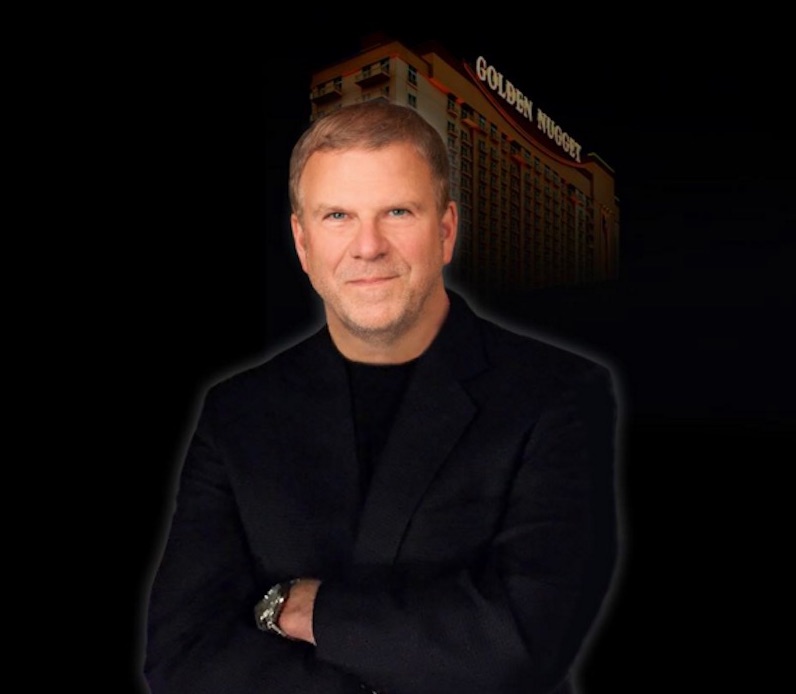 What’s the best way to manage increased labor costs due to a hike in the minimum wage? There’s no consensus, but a seafood restaurant chain may have hit upon exactly the wrong approach.

A customer at Oceanaire in Washington, D.C. was surprised last week to spot a message at the bottom of his receipt that read, “Due to the rising costs of doing business in this location, including costs associated with higher minimum wage rates, a 3% surcharge has been added to your total bill.”

When the customer sent a photo of the receipt to a local blog called Popville, the negative publicity commenced. It didn’t help that Tilman Fertitta, the CEO of Oceanaire’s parent company, Landry’s, is a billionaire known as “America’s richest restaurateur.” His company also owns other chains like Bubba Gump Shrimp Co., Morton’s and Rainforest Café, according to the Washington Post.

Landry’s has since dropped the surcharge, and Fertitta said in a statement he had never approved it in the first place. 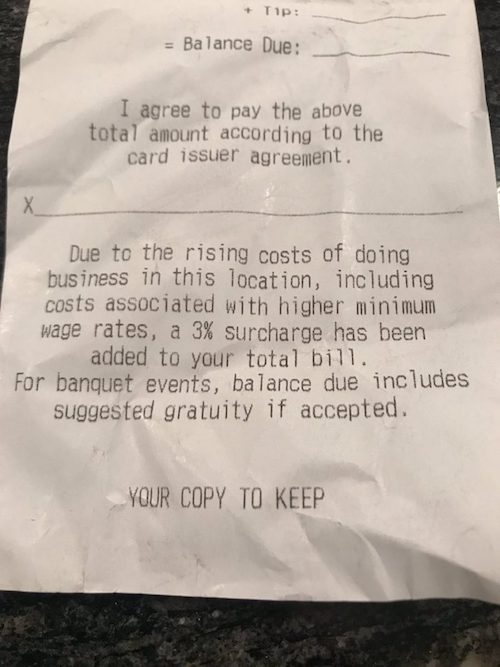 In today’s highly charged political climate, using your restaurant receipt to make a statement against a minimum wage hike seems a risky gambit. And, indeed, commenters on Popville were quick to vent their spleens. “I find this practice disgraceful and misleading,” one wrote. Another commented, “I’m happy to pay a little more so the people who work hard to make Oceanaire’s owners rich can make a decent living. I am not happy to eat at restaurants whose owners have such clear contempt for their staff.” And still another commented, “Just raise prices if you need to, don’t try to slip this in under the radar and then pretty much blame (it) on employees who need to make a living!”

A few commenters defended Oceanaire’s surcharge. “It seems to me,” one wrote, “that whether it’s a 3 percent tax or an increase in food prices, many people on here would still be upset … It’s fine to raise the minimum wage but we cannot pretend that it is not going to have an effect on the prices that we pay. If we want the staff to be paid more, then we will have to pay more.”

Most of the complaints, however, centered around the receipt message that blamed the surcharge on a higher minimum wage, not the price increase itself. 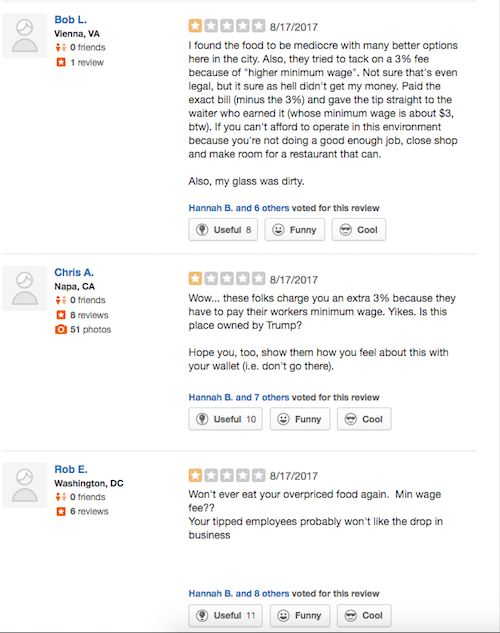 The story also sparked a flurry of one-star reviews on Yelp. One reviewer, Bob L., said he refused to pay the surcharge and gave the money to his waiter as a tip instead. “If you can’t afford to operate in this environment because you’re not doing a good enough job, close shop and make room for a restaurant that can,” he wrote. “Also, my glass was dirty.” And James P. wrote, “Raise your prices, or eat the cost, but don’t lay the 3% increase on me at the end of my meal. Your plan to upset patrons after they have dined, hoping that the employees suffer through diminished tips rather than your own diminished bottom line, will fail.”

After word about the receipt message spread beyond Popville and other media outlets began to cover the story, Landry’s responded by ditching the surcharge altogether. In a statement to the Post, Oceanaire senior VP Tim Whitlock said, “Due to the restaurant industry’s competitive market, we decided this was a temporary and nominal surcharge. The Oceanaire is committed to being transparent with our patrons and noted the surcharge on our menu, the customer’s bill and signage in the restaurant. In response to recent feedback, we have chosen to remove this surcharge effective immediately and will explore more traditional means to address the industry’s rising costs, such as raising menu prices.”

For his part, Fertitta issued his own statement denying that he even knew about the surcharge in the first place. “With more than 500 properties, I rely upon the decisions of others to help run my day to day operations for Landry’s,” Fertitta said. “Unfortunately, I was not made aware of the surcharge that was put in place at my Oceanaire restaurants and the management team has been reprimanded.”

Fertitta offered to refund the surcharge amount to all customers who brought in a receipt to any Oceanaire location.