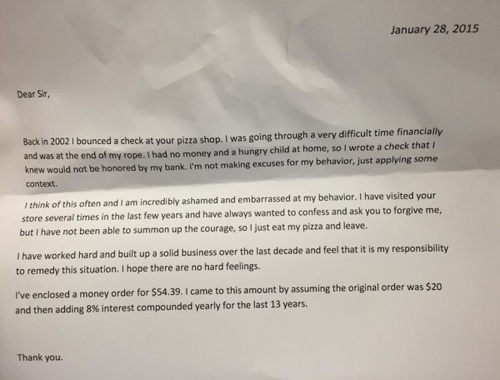 Pizza lovers aren't perfect — but they'll eventually do the right thing. That might be the moral of a story of unrelenting guilt that began 13 years ago.

Theblaze.com reports back in 2002 a pizza parlor customer paid for a meal at the shop with a bad check. Then 13 years later, the customer finally made her mea culpa in a letter (pictured) mailed to the pizza parlor owner last month. The anonymous letter writer claimed poverty and a hungry child at home as context for the deed — but also shared that she was ashamed of her action but lacked the courage to confess. So, during many visits to the establishment, she simply ate her pizza and left.

For the final chapter in this story of pizza parlor redemption, read on.