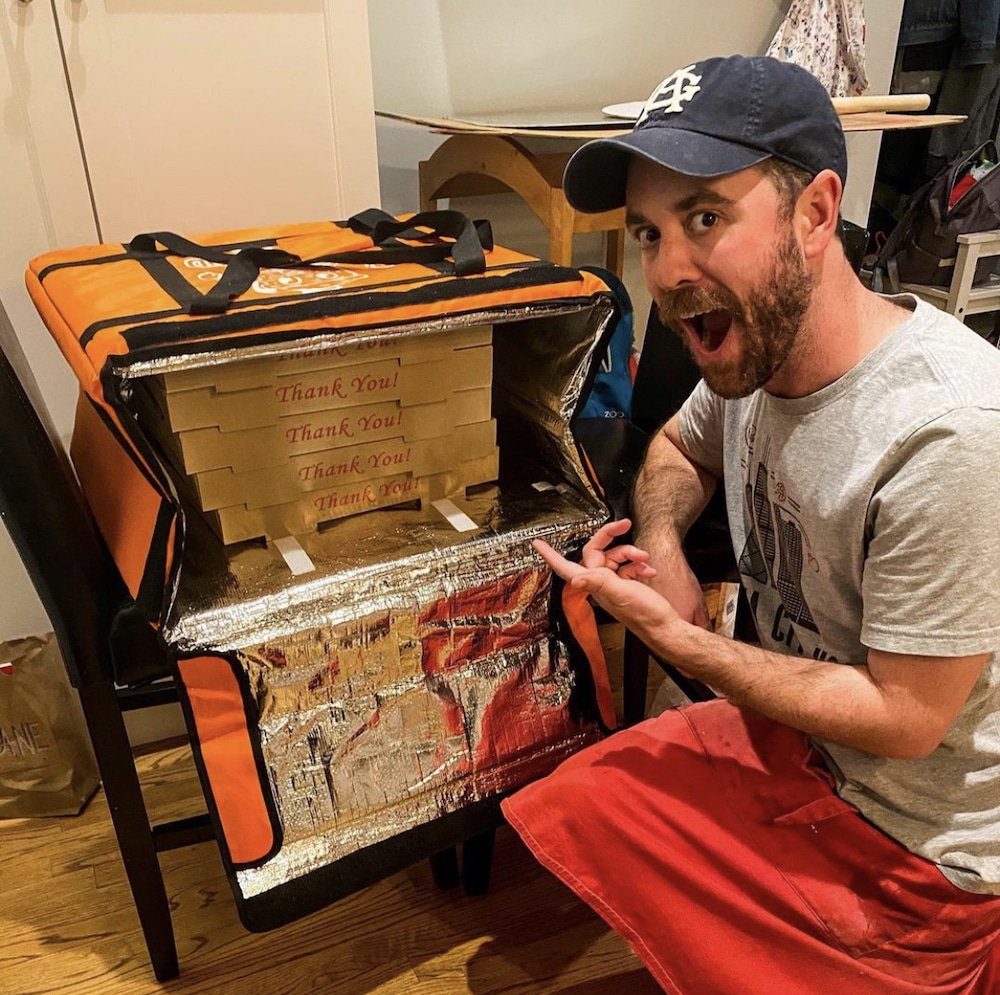 Instagram pizzerias are becoming a thing, even though for fans of John Carruthers’ @nachosandlagers account, it just might be “the shadiest pizza transaction of their life.”

He’s exaggerating, of course. As he explained to ABC7, Carruthers created Crust Fund Pizza last summer for the noblest of reasons: to benefit Chicago charities while he was stuck at home in the pandemic. “If the only thing I can do is make pizza, I decided the only thing I would do is make pizza and push money to the places making Chicago more equal, more just and a better place to live,” he said.

Crust Fund Pizza is a monthly Instagram pop-up event featuring an artisanal pizza menu and supporting a different charity each month. Buyers place an order for a pie via direct message for a minimum suggested donation of $25, and all of the money goes to the designated nonprofit for that month. Carruthers pays for the ingredients out of his own pocket.

Supporters pick up their order between 8 p.m. and 10 p.m. at a “secret location” disclosed only after the order is finalized—that’s what makes the whole deal so “shady.” Or, as Carruthers explains on his website, “It’s real speakeasy action.”

Carruthers, a food writer and communications manager for Revolution Brewing, kicked off Crust Fund Pizza in August 2020, with donations going to The Triibe, a news site focused on black Chicago. He raised $501 with six pies for The Triibe, then went on to raise $1,065 for My Block, My Hood, My City in September.

In November 2020, his pizzas raised $1,425 for Injustice Watch, a nonpartisan nonprofit journalism organization.

Here’s how Carruthers summed up the project to ABC7: “People pull up to my undisclosed alley, and they have the shadiest transaction of their life, and hopefully they enjoy it, and we raise a lot of good money for people. That’s what Crust Fund is about.”

Carruthers told the Chicago Reader that he started making pizza “as a way to keep myself sane during the shutdown.” Describing himself as “one of those really fidgety, talkative, possibly annoying personality types,” he said his day job “is very social, [and] my off-hours pop-ups and stuff are very social. That was all gone, so I started doing pizza and movies with the kids on Fridays to get some routine going. I was super-privileged to have a family around, to still have a job, to have food, etc. It’s just that my mental health in those early days wasn’t great. The uncertainty of everything was just something that I was almost specifically not built for. So doing one thing over and over and over—then kind of obsessing about it for the next six days—helped.”

During the social justice protests of 2020, he added, “The federal government continued to be a trash fire. And I think most people kind of have that helpless feeling if they have any empathy at all. And I’m thinking, ‘Well, how do you help when all your skills are kind of insufferably twee for all the terrible problems going on right now?’ But that seemed like kind of a cop-out, too. Help however you can help.”

Working with some friends, Carruthers create a logo and designed a menu for Crust Fund Pizza, and he was off and running. He told the Chicago Reader that, in the project’s first two months, his “pizza pals” (he doesn’t call them customers because he doesn’t sell anything) paid an average of $68.47 for a 14-inch pie.

“And that is a true testament to how much Chicago gives a f— about social issues,” Carruthers added. “I make a decent pie, but I could practice every day for the rest of my life and never make a $68.47 pie. These are wonderful people, and I hope the pizza is at least acceptable … And usually people go way above and beyond the suggested $25 dollar donation. I don’t post what people pay. No one knows but them and me, and they pretty much all do it. Someone got in too late to order and gave $200 anyhow. It’s a big-hearted city.”