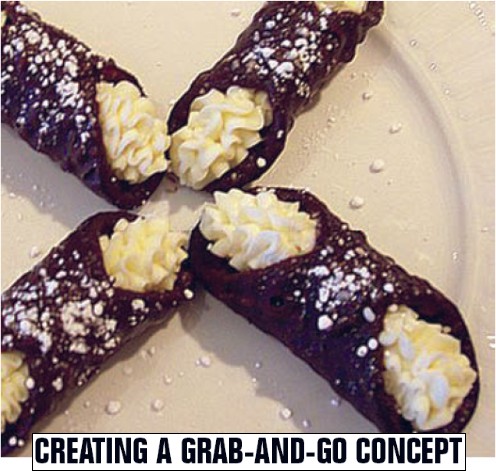 No order is complete without a hint of dessert.

Italian desserts have satisfied the sweet tooth of people all over the world for centuries, and for your pizzeria, there's no easier way to make a little extra. Usually composed of whipped cream or Marscapone cheese, crepes, and liqueur, these tasty treats are considered an art form because of the lavish presentation and mouth-watering ingredients. They are made to be enjoyed. If you've ever tasted rich cream mixed with rum flavors or soaked in espresso, you know it's heaven-sent. It's also a good add-on to any order, especially carryout, according to Paul Schneider of Finelli Pizzeria in Ellsworth, Maine.

His New York style pizzeria/deli was voted number one in the state of Maine by nearly a 3 to 1 margin in a poll conducted by the Bangor Daily News in April, 2005. Paul said money can be made by simply adding desserts to your menu.  At Finelli Pizzeria, they make less than half of their desserts. The rest are ordered from a company in Kenilworth, NJ called TasteIt Presents. "They have the best tiramisu and almond cake I have ever tried, and I've tried a lot," Paul said. 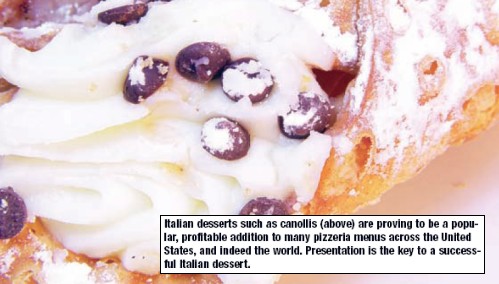 The biggest loss to most businesses comes in the rush and excitement of making a sell. Most employees get so lost in the sell that add-ons don't occur. That is the turning point for your business, or the difference between thousands of dollars a year. Just asking could make all the difference in numbers, or, as Paul has done, display your desserts right in the middle of the floor to leave the customer with no question that, "Yes, I do think I'll have a dessert this time."

Recipes are plentiful on the Internet. The PMQ recipe bank (located at www.pmq.com/recipe) has some along with sites like www.mangiabenepasta.com/ desserts.html. Recipes using Marscapone, the Italian version of cream cheese, is a must when creating such classic dishes as Tiramisu, Zuccotto, and Mascarpone cheesecake. Some other Italian desserts that shouldn't be forgotten are gelato, canolli, and spumoni.

Paul said the biggest profit for desserts comes from their homemade chocolate canolli that cost only about $70 to make (for 100 canolli) but turn almost $300 in sales in less than two weeks. But, Paul warned that adding desserts to the menu is only smart if you can properly display them. "I bought a dessert cooler that sits in the middle of the floor. Customers come in and they see the desserts – they see the tiramisu and the canolli – it creates a grab-and-go concept, and people buy them by the bag full," he said.

Canolli is the most frequently served Italian dessert in the United States. It is traditionally a Sicilian dessert made from fried pastry shell sprinkled with sugar and wrapped around a ricotta filling, or, more often in the U.S., various flavored pastry creams. If you've ever had a freshly prepared cannoli, odds are you haven't forgotten the splendid flavors, which range from chocolate and caramel to vanilla and pecan and everywhere in between. Customers love to top their meal off with a light dessert. Five percent upselling on a $5 dessert means an extra $12,000 a year to a pizzeria with a thousand customers a week, so you can see the added bonus there.

Gelato is a versatile dish that can be easily made at home or in the store using a few simple ingredients in combination with milk, eggs, sugar, water, and fruit. It is basically a lighter Italian ice cream made from milk instead of heavy cream-so it's healthier. According to historians, gelato has been in existence since the late 1500's, first created by Bernardo Buontalenti for the court of Francesco de' Medici. It is more flavorful and downright better than ice cream.

Spumoni, another popular Italian dessert, is a frozen ice cream concoction usually layered with two flavors of ice cream and sandwiched in the middle with rum-flavored whipped cream and candied fruits or roasted nuts. The ice cream is sometimes fluffed with whipped cream, which creates a light, flavorful texture. The spumoni is cut into thick slices and usually served with a flavor-enhancing fruit or chocolate sauce that captures the dessert's essence. This is an easy chance to get creative and add yet another option for your customer and your register. 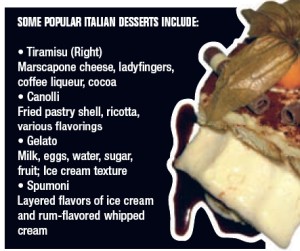 Strufolli is a delectable Neapolitan dessert traditionally served at Christmas. They are small fritters (sometimes called Italian honey balls), which are made from basic ingredients of flour, eggs, sugar and butter. They are formed into marble-sized balls, and fried to a golden crispiness. The Struffoli are then simmered in a honey/sugar glaze and sprinkled with colorful confetti sugar. For a sweet treat at Christmas, they are usually baked several days in advance to pass out to friends and family on the days leading up to Christmas. These delightful little dough balls have a light texture, and before they disappear, add a sweet aroma to the air.

They can also add a hunger-inducing fragrance to the air of your restaurant, as can any dessert. When people come in and smell something sweet, dessert instantly comes to mind. Another great way to boost your dessert sales is to have a dessert tray laid out and, if you have the extra staff, it would be ideal to have someone walk around with the tray. Some people will wait until after their meal, but in some cases, they will want to know right off the bat what's being offered for dessert. A subliminal message, if you will. Don't pass up the chance to make big money in sales on a hassle-free addition to your menu.