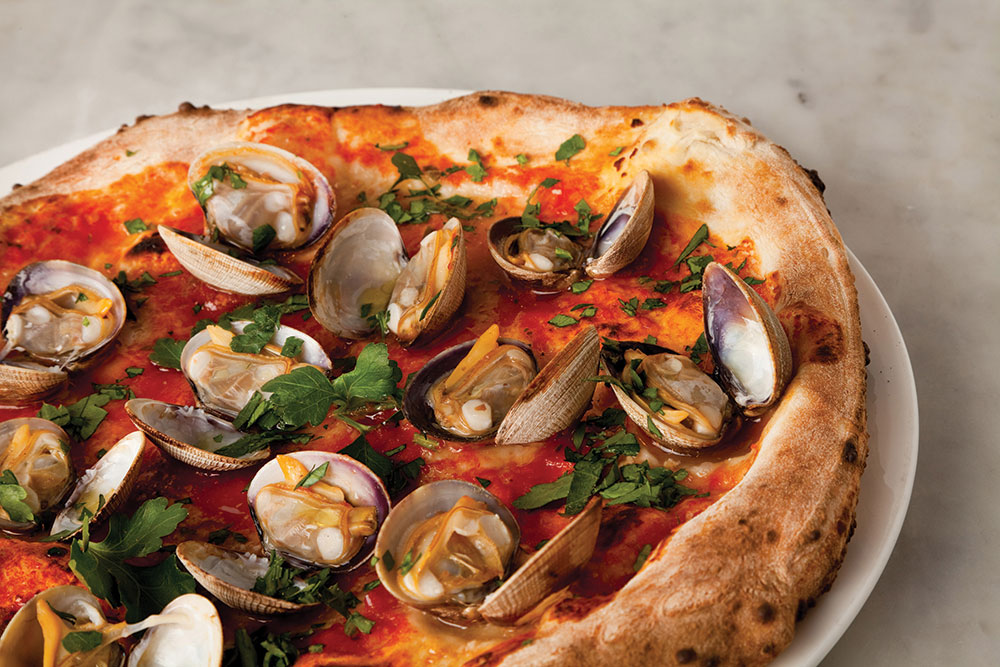 Some hardcore pizza traditionalists still think it’s nothing short of sinful to adorn a crust with Buffalo chicken or pineapple. But to appease the growing masses of jaded, tried-it-all customers who are constantly seeking what’s new, next and unusual, it’s often a good idea to think a bit outside the box. By offering toppings that aren’t available at every other pizzeria in town, operators can create a gourmet experience for pizza lovers with trendy tastes. “People want something different—other than pineapple,” laughs Michael Dene, owner and managing director of Michael’s Pizzeria (michaelspizzeria.com), with three locations in Southern California. “It’s much more acceptable now to use all kinds of unusual ingredients, and anything pairs well with the breadlike nature of pizza!”

To get you started on your own path toward offering a greater range of specialty toppings, we chatted with industry experts who are getting major attention from customers for their creative experimentation and unique topping combinations.

Wild game meats—such as sausage made from wild boar, buffalo or elk, and pepperoni made from buffalo or ostrich—are often free of antibiotics and lower in fat, so they appeal to the health-conscious as well as to the adventurous.

Meats will always be a staple for pizza—many customers couldn’t live without sausage, pepperoni or crumbled beef on a pie. But, chances are, you’re overlooking more exotic meats that can be added to your menu. For example, Tom Souran, president of Exchequer E Commerce in Cary, Illinois, points to the rise in popularity of wild game. Operators can now obtain sausage made from wild boar, buffalo or elk, and pepperoni made from buffalo or ostrich. “We’ve tested these pizzas on people, and they’ve been very responsive,” Souran says. “They taste the product and come back for more—and they’re also willing to pay more for something so unusual.” Additionally, wild game meats are often free of antibiotics and lower in fat, so they appeal to the health-conscious as well as to the adventurous.

Similarly, some pizzeria owners take the farm-to-table movement as inspiration, curing their meats in-house as a way to make their meat toppings stand out. Dave Brackett, proprietor/pizzaiolo at Pizzeria Rustica (pizzeriarustica.com) in Colorado Springs, Colorado, for example, makes bresaola (air-dried cured beef) in-house. “One of our most popular gourmet pizzas is our beef bresaola pizza,” he notes. “We top the pizza with Fontina, sharp provolone and Pecorino Romano cheeses, plus ricotta soprafina cheese mixed with lemon zest, horseradish and black pepper. After the four-cheese pizza is baked in the wood-fired oven, we top it with the shaved bresaola, baby arugula and our house truffle oil.”

Discuss in the Think Tank: What's your top-selling specialty pizza?

Curing your own meats in-house does require additional work, but for some pizzerias, it makes all the difference. At Serious Pie (tomdouglas.com), with two locations in Seattle, all house-cured meat is displayed behind glass doors, allowing customers to peruse what’s curing and, in a sense, to know where their food comes from. “We use an experimental pizza process, and we focus on and showcase our efforts because that’s why we cost more and taste better,” owner Tom Douglas says. “Curing meats can be a long process—our guanciale takes 45 days to cure—but it’s so fun, and customers love the playfulness of our chefs.”

A chef-driven focus also propels the creativity displayed at Michael’s Pizzeria, where the Anatra e Provola pie features duck confit, tomato, smoked house-made mozzarella and caramelized onions. “Duck pairs well with cheese, so we like to use it on white pizzas rather than red-sauce pizzas,” Dene explains. The duck confit does double duty on the menu as a small plate—the Anatra dish is made in a cast-iron skillet, featuring confit duck roasted in a wood-fired oven with farro and figs. The lesson: If you’re looking to add a unique topping that might require a bit of prep to make, why not utilize it for other menu items or specialty pies? Also, think seasonally: Michael’s changes up its menu at least three times per year, so in the fall the duck pizza may receive a garnish of chopped kale for a different twist. By maximizing—and leveraging the freshness of—ingredients, it can be easy to wow customers all year long and keep them excited about what’s next.

Many pizzeria chefs tend to think of specialty pizzas in terms of solid toppings, but liquid elements in the form of condiments, creams and sweet drizzles can pack a serious punch. Paul Giannone, owner of Paulie Gee’s (pauliegee.com) in Brooklyn, New York, is a former backyard pizza chef who opened his own pizzeria in 2010, but his penchant for experimentation has never waned since those days of home cooking for friends. For example, while Giannone was developing his menu, he came across a swordfish dish with anisette cream sauce—it became the inspiration behind his Anise and Anephew pie, with fresh mozzarella, braised fennel, an anisette cream drizzle, Berkshire guanciale and fennel fronds. “I like sweet and savory flavors combined on a pie, and anise and fennel have the same flavors, so it works!” he says.

But Giannone’s most popular pie gets help from a different condiment: Mike’s Hot Honey. A Paulie Gee’s employee, who also made honey, had discovered a type of hot honey while hiking in the Amazon. When Giannone learned that the employee had been working on replicating the honey in the States, he knew it’d be perfect on a Paulie Gee’s pie called the Delboy. Soon, the Hellboy was born, with fresh mozzarella, Italian tomatoes, Berkshire sopressata piccante, Parmigiano-Reggiano and Mike’s Hot Honey. “This has been our most popular pie for years,” Giannone says. Another pie with the spicy condiment: the Hellified Porkpie White, with fresh mozzarella, Berkshire sopressata piccante, sweet Italian fennel sausage, sliced red onion, garlic, fresh basil and Mike’s Hot Honey.

But Giannone doesn’t stop there—he also offers the Monte Cristo pie, based on the famous sandwich, with mild Gouda and thinly sliced Canadian bacon, finished with a drizzle of maple syrup. He showcases a locally made bacon marmalade on the Becca’s Bacon Marmalade Picante, with fresh mozzarella, sliced red onions and Becca’s Bacon Jam. Best of all, supporting these local suppliers has created symbiotic relationships that benefit everyone. “To make the health department happy, I invited our bacon marmalade and hot honey suppliers to use our restaurant and make the products in my kitchen instead of in their homes,” Giannone says. “They make it here on a day we’re closed, and I get all the product I need.”

Many operators have added pineapple to the menu as a topping option, but there’s a whole world of fruits at your fingertips. At Michael’s, figs have become a centerpiece of a sweet-and-savory fall-season pie that also incorporates a drizzle of balsamic vinegar reduction, mozzarella, light tomato sauce and basil.

On the other hand, don’t be afraid to go a little nuts. Dene used the Italian cold cut mortadella, made with pistachios, for pizza inspiration. “We put on pulled mozzarella cheese, which is stringy, and place baked pistachios—browned in the oven and crushed—on top,” says Dene. “The intense flavors and textures of hot, cold and crunch are amazing.”

How about thinking like a sea explorer when scouting out new toppings? Clam pies might be considered staples in New Haven, Connecticut, but these mollusks are still somewhat of a novelty on a pizza. At Michael’s, Manila clams are paired with parsley, spicy Calabrian peppercorn and tomato. “We put the clams on a pizza and put them into the oven, where they open up,” explains Dene. “The seawater from the clams spills onto the pizza, creating a great flavor; it’s almost like a spaghetti and clam sauce dish, with a nice peppery taste. Even though toppings like this are interesting, they also have a traditional flair.”

Serious Pie serves a pizza made with Penn Cove clams, pancetta tesa and lemon thyme. The gourmet pie showcases the versatility of seafood while introducing another way to make pizzas stand out: fresh and unique herbs. Douglas freely uses marjoram, Greek oregano (the “most floral” type, he notes), sage and lemon thyme on pizzas. Meanwhile, he obtains seasonal produce from local farmers, inspiring pizzas made with delicata squash, caramelized onion and anchovy, or green-tomato pizzas topped with aged provolone. “It’s all about the balance of flavors when you experiment—like the tartness of green tomatoes vs. the heaviness of a cheese,” Douglas explains.

Meanwhile, other pizza makers are passionate about whipping up unique toppings for customers with dietary restrictions. Paulie Gee’s offers a full vegan menu, complete with vegan sausage that’s made in-house. “I knew about the demand for this topping when we were using storebought vegan sausage, but that wasn’t cutting it,” Giannone says. “One of our dishwashers came in with vegan turkey, so I added some fennel seed and pulled it all together. People love it.”

Another Paulie Gee’s pie, called In Ricotta Da Vita, also begged for the vegan treatment; it combined Italian tomatoes, fennel sausage, Pecorino Romano, plus (added after cooking) ricotta dollops, baby arugula and extra-virgin olive oil. However, making the pizza without ricotta for vegans “wasn’t the same,” Giannone remembers. “I went to a restaurant that had a cashew ricotta pie on the menu, and they explained to me that the ricotta was made solely from cashews. I found a bunch of recipes online and said, ‘Let’s start using it!’” Of course, the new vegan version of the pie had a virtually built-in name: In Ricotta Da Vegan.

Also see: Use menu design and creative ingredients to turn your pizzeria into a haven for herbivores

If there’s anything to be learned from these fearless chefs and operators around the country, it’s that nearly anything can taste great on a pizza. Using the right flavor combinations, balancing sweet and savory, playing with texture and thinking outside the box are all great basic tenets to keep in mind, but ultimately, pizza is limited only by your imagination. Don’t be afraid to start experimenting and asking your employees and customers for specialty-pie recommendations. Once you’ve developed a winner, offer samples to take the fear out of ordering your latest great creation. With a little boldness and a healthy dose of trial-and-error, you too can create the pie of your customers’ dreams…one that they probably never even dreamed was possible.