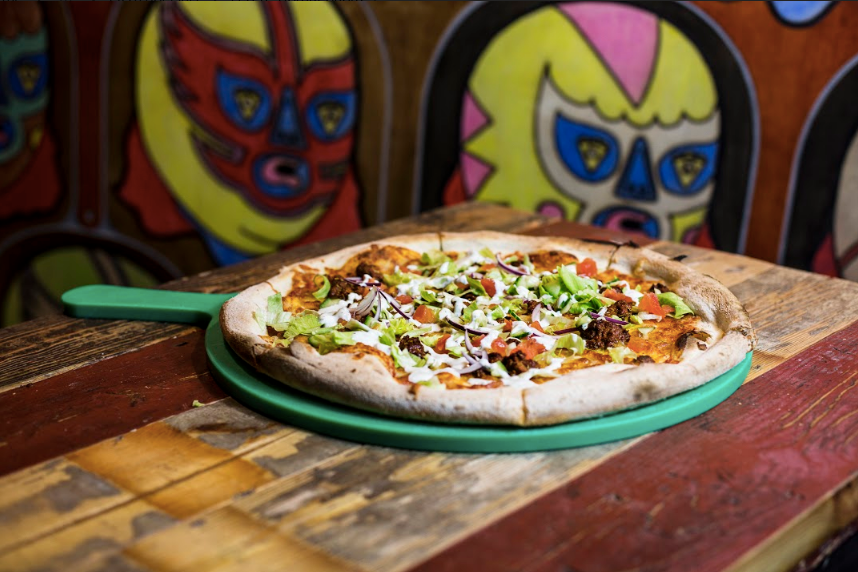 Five years ago, Ross Mackenzie woke up to a text from his friend, Lyndon Higginson: “I’VE GOT IT … CRAZY PEDRO’S PART-TIME PIZZA PARLOUR… MEZCAL AND PIZZA … ‘TIL 4 A.M… ROCKING!”

Mackenzie suspected Higginson had had a big night, that he would sleep it off and forget the whole thing.

Now he and Higginson are co-owners of Crazy Pedro’s Pizza Parlour in Manchester and Liverpool and ready to celebrate the pizzeria’s fifth anniversary. True to Higginson’s declaration, the pizzeria is open from noon to 4 a.m. seven days a week. There is no table service. The customers can walk up to the bar, order a slice or a whole 16-inch pie, and a cold beer or a shot of tequila to wash it down.  The pizzeria’s motto: “We love to party all the time.”

The pizzeria even serves up weird pizza nachos featuring a plate of standard-fare nachos with a pie of your choice cut up and sprinkled on top.

As random as the pies may seem, Crazy Pedro’s is anything but. Higginson regularly brainstorms with their head chef for long afternoon sessions in which the pizzeria staff members taste-test five to six different pies. This process is part of the fun behind the successful pizzeria.

“Long before the first pizza was served up in Crazy Pedro’s, they were working hard at perfecting their offering,” said Nick Coupland, head of marketing. “Months of rigorous testing and sampling all sorts of ingredients led to their opening menu. They went through 20 different flours to perfect the dough, which is still made fresh every day. They have a couple of classic toppings, but the rest is the brainchild of the Crazy Pedro’s team. Inspiration for them comes from different cuisines and classic flavor combinations, but random testing played a big part.”

This attention to detail has helped the pizzeria become one of the busiest places in Manchester every night. Their monthly specials often end up as new menu additions.

“We constantly push the boundaries with our monthly specials,” said Coupland. “These are usually where our craziest ideas end up, such as October’s [special], which is going to be called ‘Send Noodz,’ a collaboration with a local Ramen noodle bar.”

The pizzeria values customer input, too. Coupland said that if they see “particular demand for certain specials or feedback on social media channels,” they consider bringing back the special as a permanent addition to the menu. For example, they recently brought back the Buffalo Pedro pizza, served with Buffalo chicken, blue cheese, Monterey Jack and celery sticks.

A quick glance at Crazy Pedro’s funky colors, the iconic mustachioed mascot, and relaxed atmosphere — it’s easy to see that Crazy Pedro’s is a passion of Lyndon Higginson.  The pizzeria will celebrate its five-year anniversary soon, and Coupland hinted at the possibility that a customer may win free pizza for life. Which means some lucky customer can look forward to a lifetime of partying with the funkiest pizzeria in the U.K.