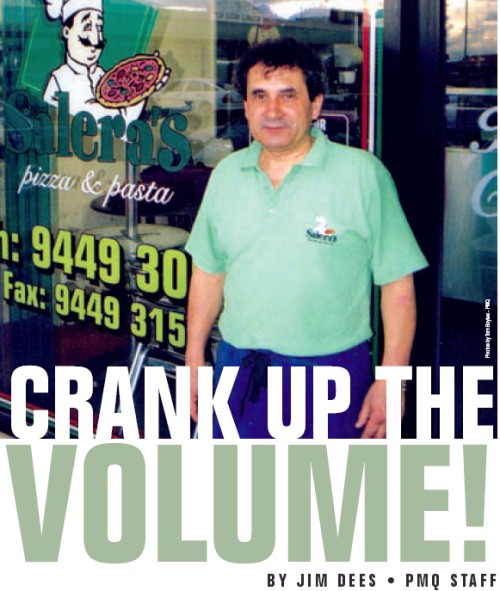 The Australian pizza market was almost non-existent ten years ago until Pizza Hut and Domino's went in with pans a-blazing in the 1990s. Australians have yet to warm up to pizza in numbers similar to Americans, but demand is rapidly growing. The Australian Bureau of Statistics has indicated the pizza market has tripled in the last year and a half. Domino's can be given much of the credit due to its mass marketing, which has created an awareness that has benefited everyone.

Perhaps no other pizza operator in Australia would agree more than Michael Saleoa, owner/operator of Salera's, a pizzeria in the Sydney suburb of Sydenham. Saleoa estimates his small shop cranks out as many as a whopping 2,000 pizzas a week.

Michael's "system" is to cut costs but not corners. For example, he has the equipment to keep up with demand which in turn enables him to keep his overhead down; he employs only five people. On an average shift, he has two people making pizzas, two working the ovens and one person manning the phone.

"In most restaurants, the chef is running the business," he says. "The only way to avoid this is to create a menu that you can run on your own without the chef. Whatever I have on the menu, I can do. It not only cuts down on complaints, but it saves me about $1,000 a week."

Michael estimates he saves another $2,000 a week by not paying labor to run his slicer and sheeter and by not being open for lunch.

"We start serving at 3 p.m.," he says, "There's not enough trade to pay labor for lunch and I don't have to kill myself." Another cost-cutting measure Michael cites is cutting his own cheese. By slicing his own cheese – enough for 2,000 pizzas a week – he figures he's saving several thousands of dollars a year.

"I go through 15 boxes of cheese a week, 300 kilos (app. 750 pounds)." That's almost half a ton a week. That's a lot of cheese. It's cheaper to buy it blocked and slice it yourself. We're only saving a couple of dollars a kilo, but if you're doing 300 kilos a week, it definitely adds up. He says his most popular pizza is a large, 13-inch pizza that he sells for $5.50 and a larger "family-sized" pizza that he sells for $8.50 (takeout only). If those prices seem low by stateside standards, they are. Since 1999, South Australia has experienced a "pizza price war" with the cost of a pizza reduced to as low as $4.95 (Australian). This crippled Pizza Hut's restaurants, and led to their closure-with the exception of two (at Mount Gambier and Marion). The remaining smaller stores are owned by Spencer Gulf Enterprises Pty Ltd.

Michael also had savings in mind when he struck up an association with Pepsi for financial help with his signage.

"I approached Pepsi," he says. "I called their manager and said I want to put Pepsi on my poster. I asked them how much they'd be willing to contribute. They helped out a lot with the printing costs." Michael says a local chicken company in Sydenham also kicked in to contribute to advertising. All the savings has allowed Salera's to use only the highest quality ingredients which he says positions his product as a slice above.

"I use a top quality flour, Western Milling," he says. "It's Australian and it's a Grade A flour that is fully 100 percent straight from the mill. We mix it with real creme and eggs, and it lasts longer. You can still cook with it the next day. With adequate planning time, it still has the strength to cook the next day and it still gives you that same gold color. I just feel like it helps add real value to our customers."

Michael has been able to survive by honing his experience (he's been in the pizza business since 1992) and knowing his clientele.

"You've got to be good and reliable and give the customer top quality if you're going to charge them money," he says. "At my other location (Essendon) we have mostly Aussies. Here, it'a new generation. We have a very multi-cultural clienetele: younger people, Italians, Greeks, Croatians, you name it. They all shop around for quality so you have to know what they want so you can understand their needs."

Michael must be doing something right. He estimates the households in his area eat at least one pizza a week with another 1,000 walk-in customers at his store per week. His biggest sellers are his chicken pizza, a vegetarian pizza and the Margherita, which features tomatoes, cheese and oregano. "That one is popular with the Middle Eastern customers, many of them Iranians. I also do very well with my "Aussie" pizza which has ham and eggs." 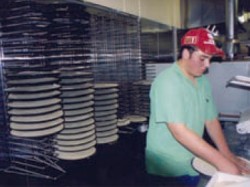 Delivery is an important part of any pizza operation. Michael estimates only 20 per cent of his business is delivery but thanks to a per pizza delivery charge, the profit margin is high. Still, Michael says it's the least favorite part of his business.

"We deliver in about a three-kilometer area around the store, which probably has about 50,000 people. You have to be careful with promotions that you don't create so much demand that you can't handle it. You can lose people that way. If the wait is too long, it's no good. You have to keep it steady."

To keep it steady, Michael says he does a postal drop of pamphlets every four months, which keeps his store in the minds of his community. Still, he says, delivery is tricky because of the scarcity of drivers and the undesirable savvy of a certain dishonest segment of his customers. 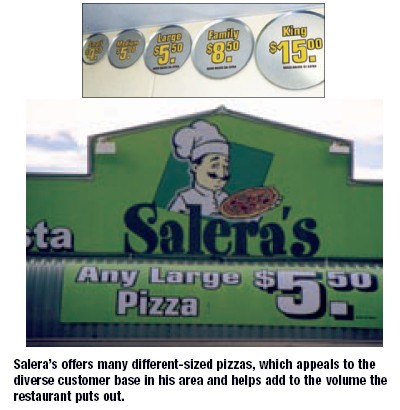 "Delivery drivers are the biggest problem," Michael says. "The good ones are really scarce and others are not reliable. Lots of time it's hard to find good drivers. The only ones you can find these days are ones with families who are looking for a second job. Other than that, it's mostly students, which is fine during holidays; they line up for jobs then, but when school starts, you're stuck."

Delivery customers bent on ripping off his store are another bane of the delivery business, Michael says. 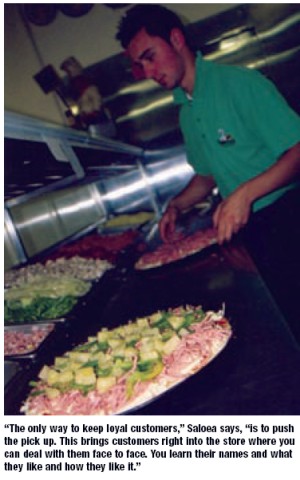 "We've got some really fine customers we deliver to, but then you've got another group who are really scumbags, absolutely scumbags. You tell them how much a pizza is and they have just that amount ready. If the driver charges two cents more, they're on the phone, ringing up the store and they abuse the hell out of us, saying the driver didn't have change.

"Some people are really shifty," he continues. "They'll ask for their money back and say they want to return the pizza and our drivers get there to pick up the pizza they "didn't like" and there's only two slices left. We now have a strict policy on that: no refunds. If you want, we'll make you another pizza, but we don't offer refunds."

As one more marketing tool, Michael includes a refrigerator magnet emblazoned with the address and phone number of both his stores with every delivery. While the magnets hopefully find their way to his customers' kitchens, even this traditional technique can be troublesome.

"A lot of times, customers will dial the first number on the magnets," he says. "Sometimes, I'll cross out the number of our other location because on the weekends, with so many orders, everybody can get confused.

"Delivery to me is the customer gets a pamphlet and then he shops around," Michael says. "There are eight other pizza shops in this area. The customers shop around now, and believe you me, if your pizza isn't 100 per cent; they're not coming back. Ten years ago, it wasn't like that."

For those reasons, Michael is a big exponent of his pick-up business, what Americans would call "takeout."

"The only way to keep loyal customers, I believe, is to push the pick up. This brings customers right into the store where you can deal with them face to face. You learn their names and what they like and how they like it."

Again, his efforts have paid off. Michael estimates he serves 1,000 walk-in customers a week.

Attention to detail and a willingness to perform much of the work himself have solidified Michael's presence in the southern Australian pizza market. By using top quality ingredients – some more expensive- the resulting high volume, makes the numbers work. An example of this is the boxes Michael uses for delivery even though that area is a smaller part if his business.

"An Australian company called Alfororos makes my boxes," he says. "American boxes are cheaper but these boxes are doubled, they handle better and they fold from the inside. It's just a better box. That's my philosophy, no shortcuts, just more value for your money."

Michael must be on to something. Thousands of pizzas aren't leaving his store every month for no reason. Saleao thinks he knows why. "It's very simple," he says before getting back to work, "The best quality at a fair price."