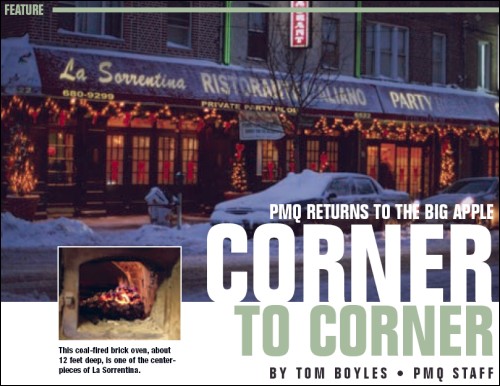 Last year I made several trips to New York City tracking down ten of New York's landmark and legendary pizzerias. While traveling throughout the Bouroughs, I learned there were a lot of other legendary pizzerias besides the well-known ones. This year I thought it would be nice to pay tribute to some of those pizzerias that are equally as good, but not as famous even though they are quite legendary in their areas. One of those was La Sorrentina.

La Sorrentina, located at 6522 11th Avenue and 66th Street in Brooklyn is owned by Giovanni Mazzola who opened in a small shop on the corner in 1972. In the time since he opened, he has expanded just a little…well, a lot. Now he owns and operates a restaurant, pizzeria, bakery and three restaurant-supporting party rooms. He stretches from corner to corner.

"I started out in this business as a salesman for a food distributor," Giovanni says in a heavy Italian accent. "After that, my brother came over from Italy and we opened a place in the city at 6th Avenue and 36th Street called Pizza Express. It is still here. Rent went from $2,000 a month to $6,000 a month so we moved out here to my neighbor, Brooklyn. Business has improved.

"There was a place down on the other corner with a brick oven bakery, so I bought it so I could make pizzas and bread in the brick oven. In this neighborhood, you can't rely on foot traffic; you have to have good food. That is why we do things the way we do."

And they do things the old fashioned way. Not only do they make their own Mozzarella cheese, they make their own sausage, bake their own bread and have a company in Italy who makes a special blend of olive oil just for them. "We're different," Giovanni says. "We buy the San Marzano tomatoes from Italy and I even have olive wood shipped over to use in the brick oven. It gives it a special taste. Buy the best quality, no matter what the cost. At one time the tomatoes went up to $23 a case, but I still used them. When the cheese we don't make went up, I still used it because it was the best I could buy, but I charged more for my pizza and slices because you get what you pay for. I never advertised because people loved the food and advertised for me."

La Sorrentina is a family restaurant. It is a place where families come to eat and celebrate. With the party rooms, Giovanni may hold wedding parties, graduation celebrations and other family events, but it not only a family destination, it is a family business. His wife (Rose), son (Joseph), two daughters (Marina and Christina work there along with his brother-in-law. "We run the business as a family," Mazzola says. "My son started here when he was 13. He learned to cook, wash dishes, clear tables, prep, cook…you can't tell people what to do unless you know how to do it yourself. We've even built the building with our own hands."

When you have been in business 33 years and built a business from a small shop on the corner to one that stretches from corner to corner, it would be easy to be a bit arrogant, but this isn't the case with Giovanni. "Mistakes, yes I have made them, but I believe in mistakes," he says. "I am still not perfect. I still have things to learn. You have to listen to people and advice and learn new ways. When you listen and learn, you make fewer mistakes in the end. The best advice I can offer is to listen and learn, keep you place clean and never sacrifice on quality. People know the difference in good quality and bad food. Buy the best and you'll see the response."

I spent some time talking to customers while in Brooklyn at La Sorrentina. The thing that everyone said was they come for the food and family. Business doesn't always need advertising in the traditional form, but traditional ways of running a business is great advertising. Be there every day, get the family involved, listen to advice, learn from mistakes, run a clean shop and always strive to make the best food you can and you'll stand out from the rest without having to spend money on advertising. Giovanni practices traditional ways and now owns not only the block, but also his customers. 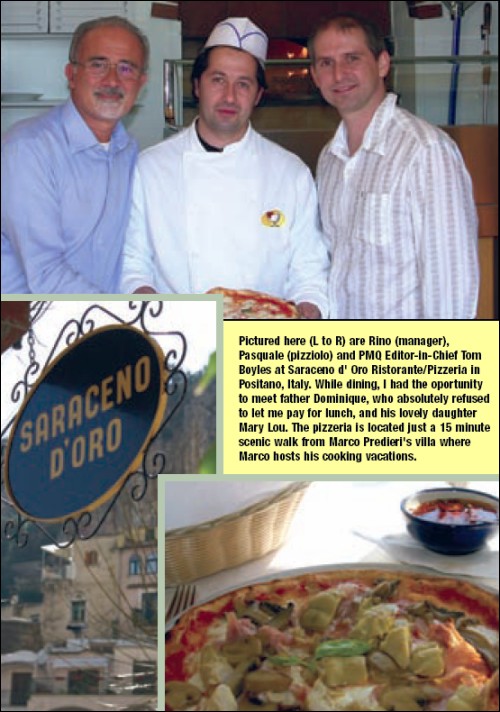 On this trip to New York I visited several other pizzeria you will read about in upcoming issues. I visited Cascarino's in Queens who is the official pizza of Shea Stadium and the New York Mets. You'll read more about Robert Cascarino soon. I visited Portabello's down in Tribeca, who has a great slice, and the massive John's in Times Square. The Times Square location is located in an old church and I can't wait to show you the stained glass ceilings and four coal ovens in here. I also had the opportunity to visit with Tony Missano and Tony Sba

rro of Sbarro's. These guys have built an empire on slices and delicatessen-style Italian food in malls, airports and similar venues. They have carried a New York tradition across the globe and are now in 39 countries. You'll be reading more about these New York landmarks in the next few issues of PMQ. I'll see you in New York City November 1st and 2nd. Remember November! 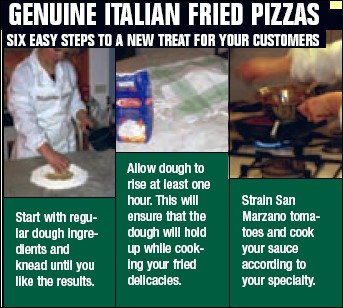