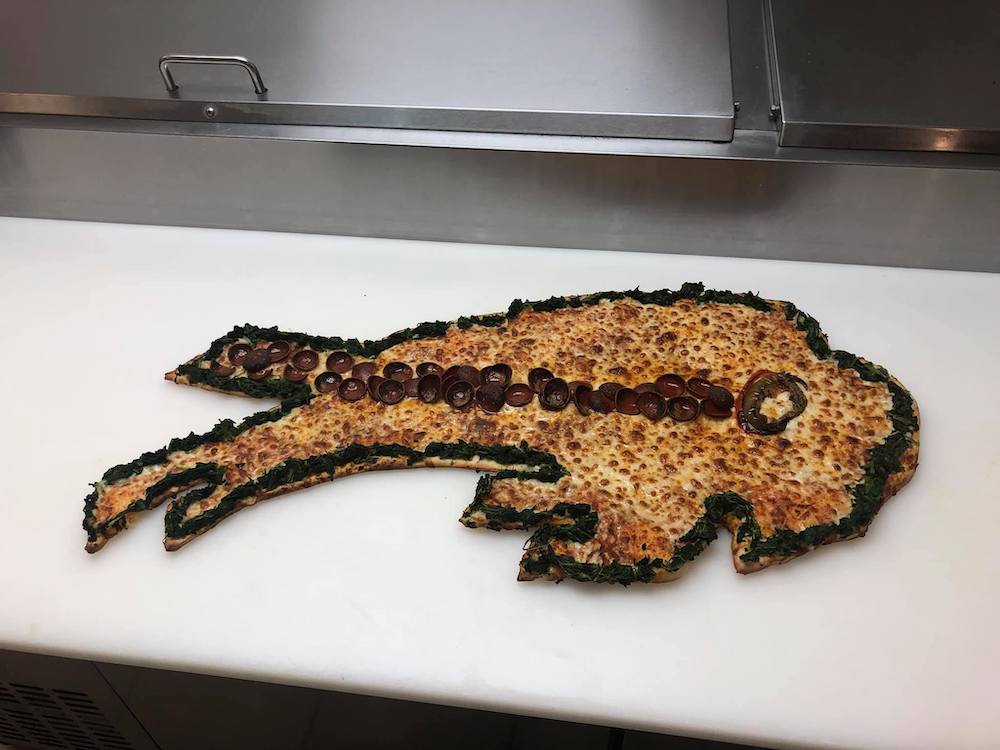 If the Buffalo Bills don’t make it to the Super Bowl this year, it won’t be due to lack of support from local pizza shops. Coppola’s Pizzaria, with two stores in Bemus Point, New York, and Erie, Pennsylvania, has been rallying fans with a season-long Bills-themed promotion, serving up pies shaped like the NFL team’s iconic logo.

The Bills survived a Wild Card Round challenge on Saturday, edging out the Indianapolis Colts 27-24. It was their first playoff win since 1995. For fans watching the game at home, both locations of Coppola’s offered a special featuring a handcrafted Bills pie and 50 wings for $55. As of Friday night, the shop had to stop taking orders for the unique pizzas, noting in a Facebook post, “Our ovens can only cook so fast, and there is a specific process to make this pizza as good as the rest!”

The promotion has earned free media coverage for Coppola’s from the Post-Journal, Erie News Now, Rochester First, and LocalSYR.

According to The Post-Journal, Coppola’s owner Luke Andriaccio started experimenting with a Bills-themed pizza two years ago, using specially designed pans and working with his staff on a technique to shape the dough while fine-tuning the sauce and toppings.

“I custom-made my own Bills pans,” Andriaccio told the newspaper. “I had a metal worker help me put it together. I framed my own Bills pans, and then I made a couple of duplicates of them. It took a while to work with fresh dough, to keep it formed the way it was. To really make it come out formed as a Buffalo Bill, it took some trial and error. It took a couple of years to figure that out because I had to be engaged in it to make it work.”

Andriaccio said the Bills-themed pies also sell well at his store in Erie, proving Bills fans can be found beyond New York’s state borders. “It is Pennsylvania, but I still consider it Bills country,” he told the Post-Journal. “There are a ton of Bills fans in the city of Erie, and they are smashing it like crazy down there, too. It’s hard to keep up.”

Meanwhile, Mustachio’s Pizzeria, located in Kenmore, New York, has tapped into Bills fever by promising free small pizzas to all customers if the team wins the Super Bowl. “It’s genius,” Mustachio’s owner told the Buffalo News last week. “People around us are excited, our customers are excited. We’re doing big numbers because of it.”

But it will be hard to top Andriaccio’s latest idea for firing up Bills fans on the road to the big game in Tampa. He and his team have crafted a new pizza in the shape of the Super Bowl trophy, a photo of which he touted in a Facebook post on Sunday. “(WHEN) our Bills make the trip to Tampa,” he announced, “these will be available on game day. LET’S GO, BUFFALO!”