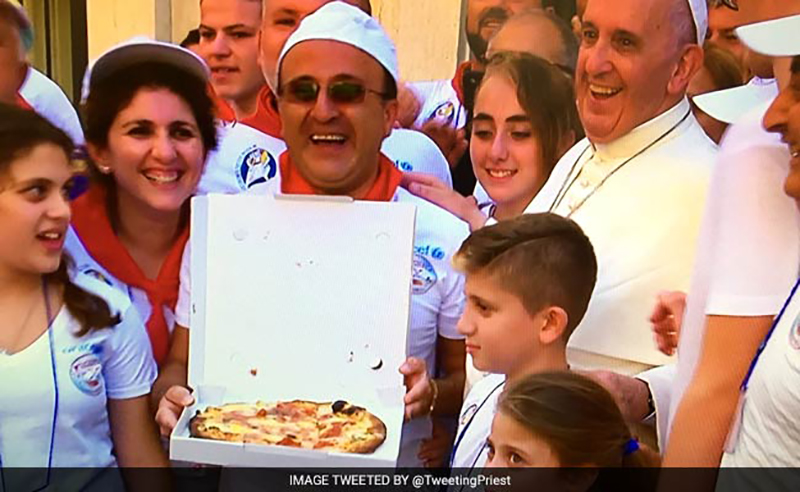 Pope Francis thrilled the Catholic faithful when he officially declared Mother Teresa a saint earlier this week. Then he topped it off with a great, big pizza party. For the homeless, no less.

Leave it to Francis, considered by many to be the coolest dude to ever don a papal tiara. He first braved the summer heat in a two-hour canonization ceremony for the beloved nun before turning the Paul VI Audience Hall into a full-blown pizza shop. Three ovens were installed, and several pizzaioli (unidentified by the Italian press, unfortunately) set about making hundreds of pies for 1,500 people living on the streets of Rome. Most of the guests came from area shelters run by the Missionaries of Charity, an order that Mother Teresa founded, and more than 250 of her missionaries served the pizzas to those in attendance, according to RomeReports.com.

The pope’s appreciation for pizza has been well-documented, and the post-canonization bash wasn’t the first pizza party he’s thrown. In fact, he threw one every day for at least two weeks last month. According to the Vatican Insider, the Papal Almoner, Archbishop Konrad Krajewski, organized multiple trips to the beach for poor people camping in the St. Peter’s area. The Archbishop personally drove the van filled with homeless people, who were provided with swimsuits and beach towels for their beach getaway. “We always conclude the trip in a pizzeria,” Krajewski told the Vatican Insider, “as do many people who are on vacation at this time.”