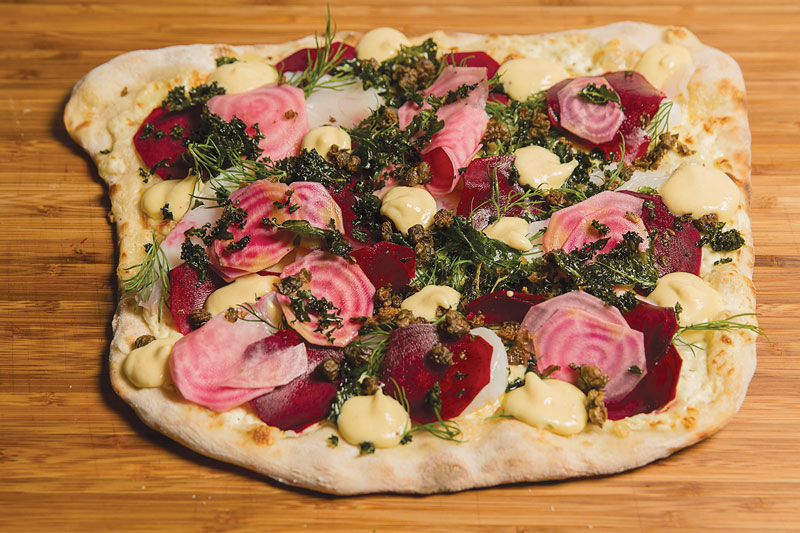 Twelve-year chef and first-time pizza competitor Niclas Lundevall placed first in the Swedish pizza competition known as Pizza-SM in April. The competition brought together eight finalists from regional competitions around Sweden to the Gastronord food show for the semifinals and finals, hosted by Fast Food Magazine. Lundevall says he chose “seasonal ingredients with Scandinavian flavors”—including cod, beets and butter custard—for his winning pie. Gastronord had plenty of such revived old-world foods on display, including pine tree oil and traditional cheeses that had been out of production for decades. Lundevall has worked as a chef in the chic restaurant Asplund in Stockhom since it opened two years ago. He says his manager signed him up for the competition. “It was my first time competing, but winning the gold meant the world,” Lundevall adds.

In Europe and around the States, communal eating spaces are becoming commonplace. Some restaurant operators are replacing smaller private tables with a few large ones to create a more sociable and inclusive dining experience. Spaghetteria Utrecht co-owner Onno Splinter says they chose a single huge table for the center of the restaurant “to create the feeling of being in someone’s living room.” Long tables can also provide a more economic way to fill up seating, but, of course, they may not be right for every restaurant.

German-based startup HeyRide has launched an app that allows restaurants to pay for or subsidize customers’ cab fare to or from the restaurant in exchange for reserving a table. Co-founder Kay McColl says HeyRide hopes to make it easier, cheaper and safer for people to get out and have an adventure. All customers have to do is open the app, select a restaurant and enter the number of people in their party. The customer receives a code to be given to the taxi driver, so no money is exchanged. HeyRide advocates spending marketing dollars on better customer service, such as paid cab fares, saying it’s “cooler and cheaper than ads” and literally brings customers to your door.

Throughout Germany, the Netherlands and wherever Turkish expats may reside, you are likely to find Turkish pizza. Turkish pizza is a variant of a Turkish dish called lahmacun, a very thin disc of dough topped with a thin layer of meat and onion paste, served with lemon. Outside of Turkey, lahmacun has transformed into a wrap complete with lettuce, onion, tomato and sauces, mostly in mom-and-pop fast-food shops. Not all Turks have taken kindly to that innovation—some feel that turning their beloved food into a veggie wrap is borderline blasphemy. But others say it’s a healthy alternative to indulgent pizzas.