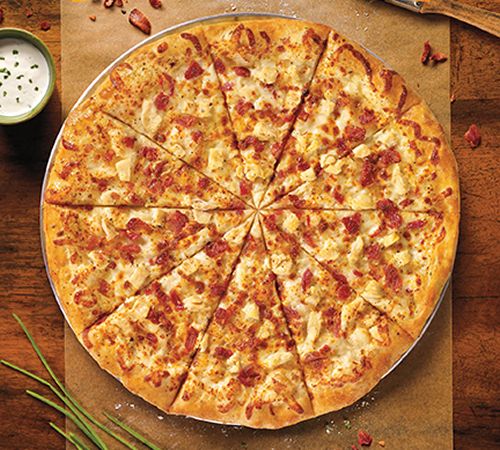 COPPELL, TX (May 11, 2015) – If everything is better with bacon, how much better could it be with bacon, chicken and ranch sauce?

Pizza lovers are about to find out as CiCi’s Pizza introduces its latest limited-time pizza flavor on Monday, May 11, at its nearly 450 restaurants nationwide.

“Our guests have been raving about our new garlic butter crust ever since we rolled it out in November of 2014, and they’ve also asked us to bring them innovative specialty pizzas to add to our traditional favorites on the buffet,” said Jason Gibbs, CiCi’s Director of National Marketing. “We’ve heard them loud and clear, and we know they’re absolutely going to love the Chicken Bacon Ranch Pizza. It’s just another way we’re saying ‘Yes!’ to our guests.”

CiCi’s Pizza is known and loved for its endless pizza, pasta, salad, soup and dessert buffet. Its quality and custom-made products offer a wide array of tastes that the entire family can enjoy.

The Chicken Bacon Ranch Pizza will be available on the CiCi’s buffet beginning today. Hurry in to try this limited-time offering, because it will only be around until July 5, 2015.

For the CiCi’s nearest you, visit cicispizza.com. BETTER. BELIEVE IT.

Coppell, Texas-based CiCi’s Pizza opened its first restaurant in Plano, Texas, in 1985 and has nearly 450 restaurants in 32 states. Known for its endless pizza, pasta, salad, soup and dessert buffet, CiCi’s won the Technomic 2014 Consumers’ Choice award for best kid-friendly quick service restaurant, and has been listed by Zagat and Parents magazine as a top family-friendly restaurant. CiCi’s was recognized by G.I. Jobs as a Military Friendly Franchise®, and Entrepreneur named CiCi’s to its Franchise 500 list. For more information about CiCi’s, visit www.cicispizza.com or Facebook.com/cicis.