Eighteen years ago, in Plano, Texas, Joe Croce opened a small takeout pizzeria and started a career that reached the heights of success every new pizzeria owner aspires to achieve.

From one location, he saw the concept grow into a franchise system over 500 units strong. The concept is CiCi’s Pizza and adding to its growing list of achievements is PMQ’s 2004 Pizza Industry Enterprise of the Year (PIE) Award.
In the past year, Joe sold CiCi’s to a group of four individuals from within the company who have committed themselves to taking the company to even higher levels of success. I had the chance to talk to current CEO Craig Moore and CMO Tom Koenigsberg about where CiCi’s came from and where they are going.

Founded in 1985, CiCi's Pizza is a family-oriented restaurant serving guests all the fresh salad, pasta, desserts and 16 kinds of pizza they want for only $3.99. Craig Moore, along with three others from within CiCi’s corporate offices, took the controls when they purchased the company from Joe Croce in September 2004. Craig started as a store manager 12 years ago and worked his way up through the ranks. Tom Koenigsberg was hired as their marketing director at the beginning of the year and is one of the newest members of the CiCi’s team.

CiCi’s operates on a simple, but critical plan. “When our guests walk through the door, we do whatever it takes to make them happy,” says Matt Johnson, operator of the 500th CiCi’s location in Woodstock, Georgia. “Our secret weapon is our unbelievable people. They care if you’re happy. If you want a pizza that we don’t have on the buffet, we will absolutely make it for you.”

Tom said the concept is centered on value. “We focus on value and once we deliver it at a set price that is low, customers experience the quality and service again and again,” he says. “Because our price point is very similar to fast food, we can compete on a level playing field on price but blow them away with our extraordinary service.”

Because CiCi’s concept is built around the buffet, one of the strategies they are focusing on is promoting their extraordinary aspects of service—all part of the price at $3.99. In addition, the time in which customers can come in and be seated and eating is minimal because customers come in, pay first and then can seat themselves and start eating. Once they are finished, they can leave when they are ready, not having to wait on a busy serving staff to deliver the ticket and then wait to pay. “Customers can come in, be seated and eating faster than they can go through a fast food drive-through and get food,” Tom says.

CiCi’s does do some traditional marketing, such as direct mail, print, television and radio, but the concept, by nature, creates its own non-purchased marketing. Their primary demographic range is moderate-income households with average incomes of $30,000 to $65,000 per year. “When looking for locations, we look for tricycles and mini-vans,” Craig says. “Mid-level and low-income families don’t have a lot of money to spend on dining out. It’s not that they are poor; they just have a lot of mouths to feed and not a lot of disposable income. Because of this, they are not catered to as often. We provide a way for the entire family to eat at a lower cost, which creates repeat customers. They can eat at CiCi’s three times for the cost of eating at other places once.”

Tom says another reason their concept markets itself is because the parents can have a salad or pizza and allow the kids to choose anything they want. “Parents don’t have to tell the kids they can’t have this or that from the menu,” he says. “They can just send them to the buffet and tell them to pick as much of whatever they want.”

Another factor Craig says is key to their success is the locations they chose to open new stores. By positioning stores in the areas where their target shops, they don’t need to have A-locations like other chains aim for because their price points draw their desired customer base in to the stores and the service and quality keeps them coming back.

CiCi’s Pizza had a 13.53 percent rise in sales from 2003 and total units were up 11.51 percent. It was a close race for the PIE Award between Hungry Howie’s and CiCi’s Pizza, but what helped CiCi’s tip the balance was their average sales per unit. CiCi’s averaged $815,959 in sales per unit. Currently, CiCi’s has 500 units and has plans to have 525 units by the end of the year. “We opened 65 units last year, are working on 71 units this year and plan to open 86 next year and 100 the following year,” Tom said

“We had two tough years starting in 2000 and 2001,” Craig adds. “When everyone else was raising prices, we always kept our same price point. After much debate, we decided to go from $2.99 to $3.99 for our price cap. Those were the only two years CiCi’s saw a drop in sales from the previous 15 years.”

When CiCi’s opened their 500th store this year they hosted the World’s Largest Pizza Buffet in an attempt to set a world record at Texas Stadium. Over 3,500 guests enjoyed 16,000 slices of free pizza from the 300-foot buffet and unlimited Coca-Cola products. 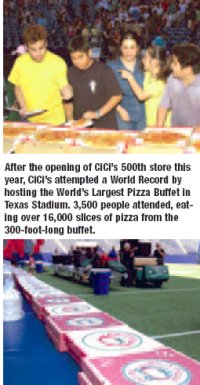 Along with CEO Craig Moore, the other three owners of CiCi’s are CFO Forbes Anderson, Vice President of Real Estate Bob Parent and President of JMC Distribution Bob Kulick. With the change of ownership, Craig says that it was key that the transfer went to people from within the company. He attributes part of this year’s success and winning of the PIE Award to Tom’s vision of focusing on one thing (value), and building a marketing plan around that. Tom also brought in Deutsch LA advertising agency to provide professional assistance with marketing and advertising.

Advice from the Pros

“Choose the right people to work with,” Tom says is the key to growing. “We get 3,000 requests for franchises each year, but we only opened 65 last year. When executed as designed, our economic model allows us to  hand-pick each person who gets a franchise. Once we determine that they are the type of owner who is committed and has the people skills, they are brought in for extensive training at the corporate stores in Dallas.”

Craig’s philosophy on growing businesses is that you have to find out what it is you are about before you can start to plan for growth. Once you do that, then you can start to work on being the best at it. He also says that you should never underestimate what people can do for you. Don’t just look at the numbers and make decision about who you want to be part of your business, but look at their personalities and skills. Choose the right one and they will work hard and help the group grow as a whole.

CiCi’s hasn’t finished making waves yet. Right now they are in 23 states, but plan to be a coast-to-coast chain. Having already moved in to tough markets like Detroit and Chicago and finding success, they have an eye on the rest of the country. “We are only as strong as our support system,” Tom says “Once we have the food distribution systems in place, we will be opening up new areas, but this all comes in time.”