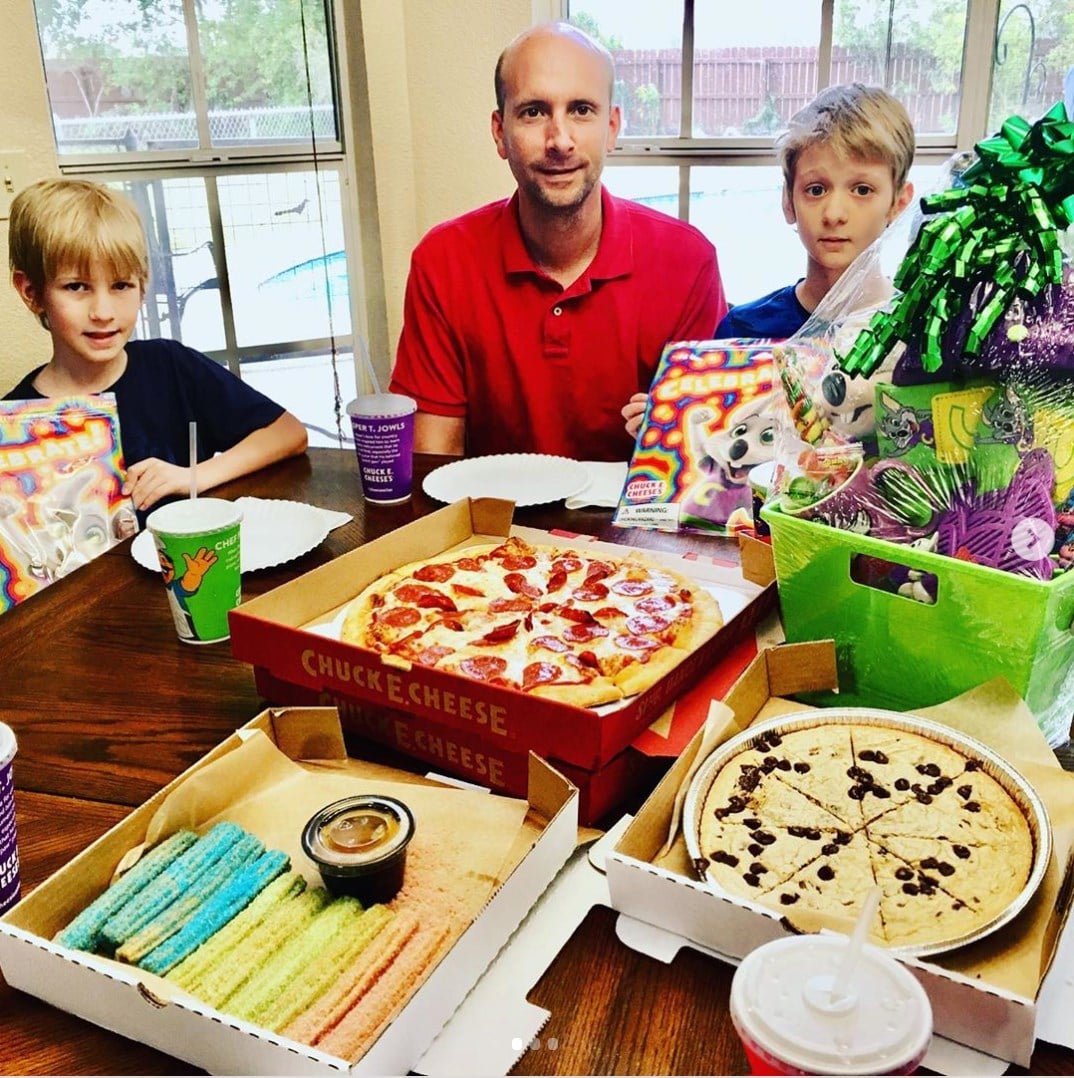 During the pandemic, parents and kids can still throw Chuck E. Cheese parties at home, thanks to the brand's take-home "party packs."

Does Chuck E. Cheese have a secret identity? Well, ask yourself this: Have you ever seen him in the same room with that Pasqually guy from Pasqually’s Pizza & Wings?

OK, the truth is, they are not one and the same—any fan of Munch’s Make Believe Band will tell you that—but their pizzas have a lot in common, and for a very good reason: Chuck E. Cheese (CEC) has been furtively doing business online under the name Pasqually’s Pizza & Wings for a while now.

Chuck E. is, of course, the famous animated mascot of the kid-friendly CEC brand. Pasqually P. Pieplate, as it turns out, is the name of the brand’s fictional pizza chef and, yes, the drummer in the aforementioned pop-rock combo.

The secret behind the new Pasqually’s brand came to light, as Food & Wine has reported, thanks to a Reddit user in Philadelphia who thought she had ordered from a local independent restaurant via Grubhub. But she smelled a rat, so to speak, when her pizza from Pasqually’s arrived. In a text to the delivery driver, she asked if the food had come from the chain. He responded that he’d picked it up at a CEC store “but the windows had the wing restaurant [logo] on them.”

According to Food & Wine, there are dozens of listings for Pasqually’s on Grubhub around the country, and each one shares a physical address with a CEC location. Pressed for an explanation, a CEC spokesperson fessed up in a statement emailed to Food & Wine and other publications: “CEC Entertainment, Inc. recently launched Pasqually’s Pizza & Wings nationwide. The inspiration was rooted in the desire to create a premium pizza while staying true to the CEC brand.”

The statement added that Pasqually’s “shares kitchen space” with CEC and uses the same pizza dough, “but it is a different pizza that features a thicker crust and extra sauce, giving consumers a more flavorful, more premium pizza experience.”

Business Insider points out that CEC isn’t the only major chain that has created a secondary brand for food delivery only. Applebee’s delivers under the name Neighborhood Wings by Applebee’s, while Just Salad offers an online-only brand called Health Tribes.

“While these secondary brands may seem nefarious, they’re simply tools for restaurants looking to appeal to a wider audience in the virtual dining landscape,” Business Insider’s Irene Jiang writes. “Third-party platforms typically allow restaurants to choose only a few categories—such as pizza, comfort food or wings—and launching a secondary, delivery-only brand enables restaurants to expand the search categories they can reach.”

In fact, CEC, known almost exclusively for its family-focused dine-in experience and coin-operated games and activities for children, has been struggling in the coronavirus pandemic and resulting lockdown. The company’s stores do offer a carryout menu, as kid-friendly as ever, including the $20 “Family Fun Pack” with two large one-topping pizzas, a “goody bag” with games and toys, and 800 tickets for the arcade when the stores can reopen for dine-in. For $50, customers can get a “Party Pack” with two large pizzas, a cake, 1,000 tickets, three goody bags and three bags of cotton candy, plus a Chuck E. Cheese tablecloth, plates, napkins, plastic forks, cake cutter and a themed backdrop for pictures.

Alerted to CEC’s online identity switcheroo, Stephanie Hayes, a columnist for the Tampa Bay Times, gave Chuck E. and his gang a pass. “I should have been outraged at the cynical corporate gambit, this dark rodent subterfuge,” she wrote. “But I was delighted … As far as money moves go, this feels pretty harmless in the grand scheme of our national nightmare. No one knows what the future holds for places like Chuck’s, these temples of togetherness. So if they want to get a few bucks from Grubhub, I can deal.”

Hayes even placed an order from Pasqually’s when she found out about it. Even so, she wasn’t impressed with the food, commenting that the pizza was “wooden and greasy [and] the boneless wings were soggy nuggets.”