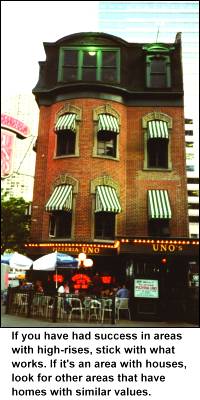 Large chain pizza operations typically have sophisticated real estate departments that use a number of state of the art market research tools to find new, promising locations for their restaurants. Does that mean the independent pizzeria on a thin budget is the underdog in finding new locations?
Not according to Lloyd Gordon, President of GEC Consultants in Skokie, Illinois (847-674-6310 www.gecconsultants.com). "Ma and pa pizza restaurants have as good a chance to find good locations as a chain because they're familiar with the area," he says.

For a pizza restaurant looking to expand to a second location, there's a number of easy-to-do steps that will cost little or nothing. First, Gordon says, is to seek out a similar area whether it be in a different nearby town or an area in the same town with a similar feel. As you are driving around scouting potential sites, a key factor to look at is housing.

"If your pizza restaurant has already been successful with hi-rises, you should look for another with hi-rises," he says. "If it's homes, then look for homes that have the same value. That means people are in the same economic situation that you're already serving."

Gordon suggests getting some undercover intelligence. "You can call a real estate agent in the area you're looking at and say you're thinking of buying a home in the area," he says. "You can ask for the average home value and about schools for children and the location of the closest high school."

The next step once an area looks like an excellent demographic fit is to drive through the surrounding neighborhoods counting the pizza places and then double-checking that with Yellow Page listings when you get home. That not only checks your figures, but also helps in trend analysis. "Say you drive around and come up with 42 pizza restaurants and can only find 20 in the Yellow Pages," he says. "The question would be what has happened to the area in the last eight to nine months."

So, now you've gotten the area and the competitive environment right, what's next? Choosing the spot. There are two, sometimes quite different scenarios that come into play depending on the neighborhood you're considering. One is a traditional street shop in a more urban location, the other, the more suburban strip mall model.

For a street location, key factors will be amount of traffic that goes by the store, the speed limit of the street and the number of lanes. Gordon argues that the best locations are on secondary streets with a speed limit of 25 to 35 miles an hour and no medians. These are locations that are very close to public transportation and on streets of no more than four lanes, two in each direction.

"When you get six lanes, three in each direction, drivers don't really see the street businesses as well," he says.

Even on a secondary street, versus the main drag, it's key to get good drive bys. That's why your original location should be quantitative scored, perhaps from 5 p.m. to 6 p.m. or even 7 p.m. to count the number of cars going by. That should also be done from the proposed location, figures compared and appropriate conclusions drawn.

Strip center locations present some different rules. For these, a street median is acceptable because there is typically a turn in lane available. Also, the speed of the frontage road can be higher than in the urban setting because people are coming in to the parking lot. However, a strip center location must be carefully chosen. "If you have one big box store on one side and another on the other, you're going to be obliterated," Gordon says.

The nature of the other businesses ought to be considered, too, to make sure they are compatible with pizza. For example, Gordon argues, bookstores are great for pizza because people tend to spend more time in those stores that could spill over into the restaurant as opposed to another kind of retailer where people tend to go in and out quickly.

Once you're interested in a strip location, you should be able to get some excellent data free from the property owner, says Jason Black, co-owner of Bigfallas Pizzeria in the Atlanta suburbs. Black and co-owner Mitchell Newman opened their first location in 1999 in Austell and followed it in June 2001 with a second company owned restaurant in a strip center in another Atlanta suburb, Douglasville. "We went to the owner of the center and asked for population rings," he says. "We were able to get demographic information for a radius of one, three and five miles." This included such data as household income and the average number of people in each household.

This combined with their gut positive feeling about the neighborhood (Black had been very familiar with the area during his prior work with Papa John's), convinced him that they could succeed in a location that had been a failed pizza restaurant. Black's point of view is that it is your concept and product quality that's going to lead and just because one pizza place failed on the site is no reason to stay away from the location. So far, he's right. "We're beating our expectation at the restaurant already," he says.

Another possibility in location selection is to look at transitional neighborhoods in more urban settings. This presents a most interesting challenge and opportunity for pizza restaurants moving through the location selection process. There are typically few or no restaurants in these areas at the earliest stages of the transition, says Fred Smith, co-owner of Mojo Oakhurst Village Pizza & Pub in Decatur, Georgia. "It makes the most sense for pizza to lead the way," he argues. "Pizza is something everyone enjoys as opposed to a fish house."

But, that contains an inherent amount of risk. If the transitional neighborhood doesn't make it or progresses much more slowly than anticipated, the restaurant might not survive. Indeed, when real estate developer Pete Whitlock attempted to find a restaurant tenant for one of his properties in the transitional Oakhurst neighborhood a few years back, he was turned down everywhere he went. He pitched a wings company, three pizza restaurants and others. No luck.

So, he reluctantly went into the pizza business himself and opened Mojo Oakhurst Village Pizza. Without knowing anything about the pizza business, but confident of the location, Mojo opened for business. The first year or two were tough, but now the restaurant is making a profit. "For a transitional location to work, you've got to have good housing stock and a pent-up demand as young couples move in with new ideas," Whitlock says. "You should also have a strong neighborhood organization."

The opposite of a transitional neighborhood is California's Silicon Valley. Over the decades, this area south of San Francisco has been turned into the high tech capital of the world. This has meant quite a financial spillover for businesses serving the burgeoning workforce. Indeed, it has been an important factor in the success of Tony and Alba's Pizza, with seven locations in the area.

Founder and Director of the Campbell, California-based company Tony Salciccia says that he wasn't even looking for a seventh location when a real estate agent gave them a cold call three years ago about a space in Redwood City. "He told me it had been a pizza restaurant before," Salciccia says. "We talked to him and then went out there. We don't spend money on market research on something like this. We go more from our gut."

Tony and his son Anthony saw a shopping complex that included Target, Cost Plus and Hollywood Video. "There were a lot of people working there," he says. "We thought we'd get some of them plus all the people filling up the parking lot."

Additionally, it was near a number of large high tech companies with their huge workforces and could take the load off its Mountain View store to the south, which was straining to make deliveries in the area.

This strategy worked even though the contract the company signed did not have an exclusive provision in it. "After we opened, we had a Chuck E. Cheese open up in the same shopping center," he says. "But it's helped us because many parents who drop their kids at Chuck E. Cheese come over here to eat."

Salciccia is eyeing an eighth location, this one in Gilroy, about 20 miles south of San Jose. "We chose Gilroy because we'd like to take Tony and Alba's to Salinas, Monterey and Watsonville (all about an hour to an hour and a half south of San Jose)," he says. "We need Gilroy to make it easy on our commissary runs."

This points to another significant factor in location selection for a restaurant group with multiple sites that has converted to a commissary style of production. The new site needs to be part of a flowing series of restaurants so the driver doesn't have to spend significant amounts of time driving just to get to one location, Salciccia says. PMQ

Richard L. Cohen has written about the pizza industry for the last 16 years. He wrote for Pizza Today between 1985 and 1992, Pizza and Pasta Magazine from 1992 to 1996 and then again for Pizza Today from 1996 until 2001. His focus is market strategy, advertising and promotions. Pizza is only one of his focuses; healthcare is the other area of his journalistic concentration. Richard is also the editor of Healthcare Marketing Report and Physician Referral and Telephone Triage Times. He resides in Decatur, Georgia and can be contacted at: rlcohenbp@aol.com