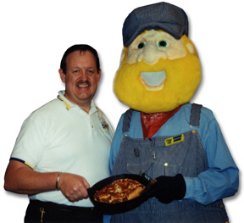 Back in the 1980s, the video game craze swept the nation like a plague. Kids, as well as adults, from coast to coast and across the globe, pumped every quarter they could get their hands on into Pac Man and Asteroid machines. This disposable income kids were spending had quite an affect on the economies of several industries. The billion-dollar music industry is one example. Listen to how video games almost ruined them with their attraction.

Music historians have attempted to discover just what it was around the late 1970s and early 1980s that caused what many claim to be the shift from creative musical artists and groups to "disposable" one-hit wonders created by the corporate music industry. Most of what is sold and played these days is garbage that is 'made' by the industry. I know, I sound like one of those guys who whines that there hasn't been any real "music artists" since John Lennon died, but stay with me for a minute and you'll see my point. Until then, successful artists and groups were determined by record sales from listeners who bought their music. All of a sudden, record sales across the board plummeted. Record companies were struggling to stay afloat. In response to decreased record sales, the record companies started 'producing' musical acts that were camera friendly and looked good on MTV – their saving grace. Many musical artists who were loved on the radio were no longer selling. But why? Consider the video game element.

Research has correlated the decline in record sales to the rise in popularity of video games. Rather than spending their money on records, like they used to, kids were dropping their quarters into video games. Games were consuming all of their spending money, thus creating the need for record companies to produce marketable artists and groups. This continued until the advent of Playstation, N64 and XBOX. Home gaming systems now have better graphics than arcade games. So where is the revenue-producing future of arcade games headed? "The smart buy may be redemption games," says Paul Conner.

Paul Connor has been in the pizza industry for 21 years, 19 of which he worked for a major chain before opening his own independent pizzeria. As manager for this major chain, he created the top grossing game room for them. Now he owns Choo Choo Charlie's Pizza and brings in an additional $2,500 per week in gross revenues. He says that about 25 percent of the game room revenues go towards purchasing prizes. His pizzeria is 6,000 square feet with 1,000 square feet dedicated to a game room for family entertainment. Everyone enjoys playing redemption games. Moms, dads, and grandparents enjoy helping the younger generation to win more tickets.

"Choo Choo Charlie's was created from my imagination," Paul says. "I wanted to create a place with 'Food and Fun for Families.' All of my games reward the players with tickets based on how well they score or their skill level. Guests can redeem the tickets for prizes. The important part of this is to offer something that has value. As a parent, I know how ripped off you feel when your child spends $10 and gets a plastic spider ring. These aren't prizes that make the parents or the kids want to keep playing. I offer everything from high-end prizes like bikes, and CD players to mid-range prizes like plush animals, Hot Wheels and Barbies to the lower-end prizes like lighted bouncy balls, tattoos, army men, and candy. I have about 30 redemption games that are geared towards kids 12 and under."

There are a couple of repeat visit marketing strategies Paul employs. First, he uses special tokens made for Choo Choo Charlie's rather than allowing the use of quarters. This ensures the customer spend the money at his business rather than pocketing remaining money and leaving. He also uses ticket eaters. Ticket eaters are machines that the kids can walk up to and feed their tickets into and it prints out a receipt of how many they have earned. This eliminates counting errors and reduces the amount of staff needed for the game room. Once they have fed their tickets into the machine, they take their receipt to the redemption counter and either trade them right then for prizes or have them put into a 'bank account' so they can accumulate enough for larger prizes.

"We have a computer where we can credit their accounts and store tickets they have won," Paul explains. "This serves a couple of purposes. First, it teaches kids how to save and work towards a goal. It also encourages repeat business when the kids start working towards winning a bike or CD player. My goal was to create a way to teach kids how to save and that saving gets you what you want. When they start saving, we give them a mock bankbook to record the tickets they have won. We also record the amount in the computer because kids will loose them or forget and leave them in pockets and they get washed. It satisfies the parents in that they feel like they are getting something for the money they are spending. In the past year,

I have given away six bikes, which require 9,999 tickets. You have to maintain a good perceived value for the consumer. I also recommend joining IALEI (International Association for the Leisure & Entertainment Industry), this association has many resources including "Fun Expo" held annually in Las Vegas. For more information on attending Fun Expo, visit www.funexpo.com.

Redemption games are also a great way to boost sales, increase business on slow days and increase the number of parties held at your business. Paul dedicated Mondays and Tuesdays as Family Fun nights. He offers a large pizza, $5.00 in tokens and four sodas for $14.99, which is about an $8 savings for the family.

Having a game room and prizes kids can win creates a natural draw for birthday parties. Paul has created quite a successful Birthday Program. Kids can sign up to be members of the Engineers Birthday Club. A couple of weeks before their birthday, he sends them a card wishing them a Happy Birthday. He also offers them a free ice cream Sundae and four free tokens with the card. On the back is a reminder to parents that they can have their party at Choo Choo Charlie's.

"I want an environment where parents don't cringe when the kids say they want to go there," Paul says. "I think the quality of our food brings the parents and the games are what the kids want. I do anywhere from five to 15 birthday parties every Saturday. Birthdays are a year-round deal. With my birthday program, I offer different packages with different food offers and tokens for each member of the party." games: buy or revenue share?

Paul said he spent about $125,000 on his 30 games and they should be paid for in about 24 months after upkeep and overhead. There are two schools of thought when it comes to considering adding redemption games. You can either have a vendor install the games and share the revenues or buy them yourself. If you go with the revenue share, he says you have to deal with tickets, their value and work with the vendor to determine a fair share for handling the cost of taking the tickets and supplying prizes. If you buy the games, you own them. You deal with everything directly, you do the upkeep and all of the revenue is yours. As far as upkeep, he says it's pretty basic and once you get the gist of it, it isn't that hard. "My game room is the engine that drives Choo Choo Charlie's," Paul says. 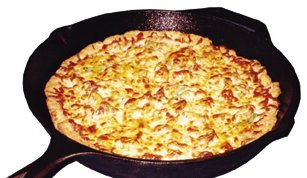 Paul spends about $1,000 a month on marketing. This includes mailing birthday cards and radio ads. He had a jingle created, which he says kids come in singing. "It creates the perception that we are a national chain, which is my ultimate goal," Paul says. "We also created Choo Choo Charlie as a mascot and he helps with the birthday parities, and attends many community functions, including parades."

One of the unique menu items he has is a pizza called "Skillet Pizza." "This pizza is something we created that no one else has," he explains. "We use a special dough with cheese and spices blended in that we bake first. Then, we sauce it, top it and bake it again. When it comes out of the oven we place it in a warmed black cast iron 'skillet' just like grandma had in her kitchen. The warmed skillet keeps the pizza hot as it is served at the table. This is an item we would like to market to other pizzerias. 'Skillet Pizza' is a product unlike anything served by the chain pizzerias. The dough does not need to be proofed and once it is baked it can be kept under refrigeration for up to five days. The dough is soft, and tender with a unique flavor created by the cheese and spices that are baked into the dough.