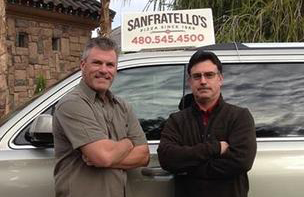 One of Chicago's pizza legends, Sanfratello's Pizza, has moved west with its owner.

According to Bizzjournals.com, Chicago native Scott Dunnett is bringing the pizza place to Gilbert, Arizona. Dunnett grew up in Chicago and worked as a trader at the Chicago Mercantile Exchange. Once he felt being a trader became too risky to support his family, he moved out to Arizona in July 2012.

Read more about the chance to sample Chicago-style pizza in Arizona.