Jonathan Porter: Chicago-Style Pizza and Where to Eat It - PMQ Pizza Magazine 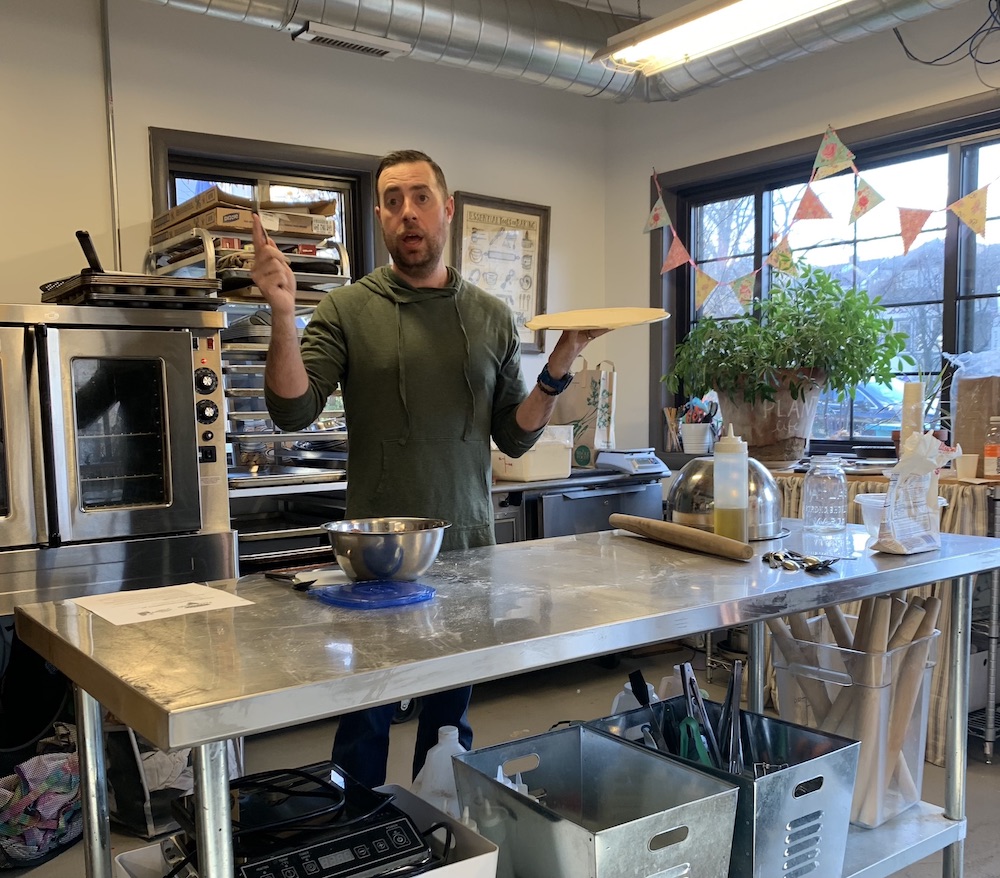 Related: Jonathan Porter in his own words: “Why I love Chicago-style pizza”

Contrary to popular belief, there’s no singular Chicago-style pizza. There’s three—deep-dish, tavern-style and stuffed crust—and, yes, they all live up to the hype. If you’re heading to the National Pizza and Pasta Show, taking place August 23-25 in Rosemont, Illinois, you’ll be wise to try them all because each offers a different and highly satisfying experience. But before you make any dining decisions, you should learn more about Chicago-style pizza, and for that, Jonathan Porter, owner of Chicago Pizza Tours, is your man.

For our June-July 2022 cover story, PMQ talked to Jonathan about the origins of Chicago Pizza Tours and picked his brain about the controversial history of the Windy City’s most famous pizza style, the deep dish. He also shared some of his favorite pizza spots for all three styles and even offered a couple of tips for starting your own pizzeria in a city where you’ve really gotta know your stuff (so to speak). Here’s the full interview:

PMQ: First, tell us the story behind Chicago Pizza Tours? How, when and why did you start it?

Porter: In November of 2008, I thought the idea would make for a pretty cool company, so I went ahead and purchased the website and started thinking about how I would put it together if I ever had the time to. A few months later my wife and I welcomed our first child to this world, and, the day we brought him home from the hospital, I got a call from my top client letting me know that they had a new CEO and all of my business was pulled. With the housing crash happening in 2008, I was losing customers one by one, but when my top account called and said it was over, I was in panic mode. I ended up taking a job that summer with the city of Chicago teaching tennis to both kids during the day and children at night. When I got back around 10 p.m., I would work on the business plan for how a pizza tour might actually run. By January of 2010, we were a fully incorporated company and ready to roll—my career change from salesman to tour operator was complete.

PMQ: There’s some controversy over who really “invented” Chicago-style pizza—specifically the deep-dish variety? What’s your take on it?

Porter: [This is] one of my favorite subjects to talk about on the tour, regardless of what tour I am running, since we do run multiple walking and bus driven tours. The lore behind who invented it makes for a great story and it adds to the mystique of the style, but, in the end, it doesn’t really matter who, how, when or why it happened.  All we 100% know for certain is where.

The story I heard growing up is that [Pizzeria Uno founder] Ike Sewell, a Texan, came to Chicago with a dough recipe and thought that pizza needs to be bigger and better—the Texas way! But that story has long been debunked, and it turns out that Ike was more of an opportunist after people passed [away] and the pizza became a hit. Either way, he has his own honorary street on Wabash between Ohio Street and Grand Avenue. Some people speculate it was his original business partner, Richard Novaretti, [who created the deep-dish style], and that story likely checks out. He purchased the building, lived upstairs, and was quite the chef himself. The part I get stuck on is, we really don’t know if the pizzas he first created were even deep-dish.

The lore grows even more when you find out that Lou Malnati, Rudy Malnati Sr., and Rudy Malnati Jr. are all integral in the success of [Pizzeria Uno] with several pictures of Lou serving the deep-dish to his father. But, again, no one knows for sure. I think the real story is a little more anticlimactic because we think that, most likely, over time as pans broke and they couldn’t source them again, those pans got bigger. And as those pans got bigger, the recipe was adjusted to make sure everything worked.

The kitchen was largely African-American women from the South, and we do know that they play an integral part in the deep-dish pizza’s success.  Whether someone invented it, popularized it, or altered it, it’s all tough to say. But that’s what makes the lore of the deep-dish pizza so cool!

PMQ: For your Original Chicago Pizza Tour, you’ll take your customers to four pizza shops. Are they always the same, or do they vary from one tour to another? How are the pizza shops selected?

Porter: Once upon a time, before there was a pandemic and a labor shortage, we used to work with more than 20 pizzerias on the tour. However, coming out of the pandemic, we really needed to pare it down just a little and focus on places that could support and give a wonderful experience to our guests. We are currently working with 12 pizzerias and hope to work our way back up to those 20+ pizzerias again as many of these businesses rebuild their restaurants and staffs. That being said, we base our selection off of featuring a range of styles in different neighborhoods. It is quite the tour to spend 3.5 hours visiting four pizzerias in four different neighborhoods trying two different deep-dish, two different tavern style thin-crust, and one off-the-wall style like a coal-fired or artisanal pie. By the end of the tour, the guests really are unable to compare any of the slices because they are so different.

PMQ: You and I know that there’s more than one Chicago-style pizza. When most out-of-towners take your tour, do they know that? What are they expecting going into the tour, and what do they learn by the end of it?

Porter: For out-of-towners, there’s that shocked look on their face when I say, “Now Chicago is known as the deep-dish capital of the world, but, for the most part, the locals only eat it on special occasions or when people from out of town are visiting us. What we grew up on is a thin-crust, tavern-style pizza, a circular pizza that’s cut into squares.”

Luckily we usually have some locals on every tour that start nodding in agreement to help back me up. Those out-of-towners are usually relieved by the end of the tour that it wasn’t all deep-dish since we typically sample around eight slices. It also gives them a real sense of what the pizza culture is truly like in Chicago. It would be crazy if, every time we wanted to eat pizza, it was a deep-dish.

PMQ: Aside from the famous brands, what are some of Chicago’s lesser-known “hidden gems” for pizza that you would recommend for a first-time visitor?

Porter: For me, hidden gems are places that aren’t near the downtown areas. There really are some great places close to downtown like Pizano’s, Robert’s and Flo & Santo’s, but it would tough to classify them as off the beaten path. I love hanging in Chicago’s more than 70 neighborhoods. If you’re going to a Cubs game up North, try Coalfire, Spacca Napoli or Bartoli’s. Find yourself in Bucktown or Logan Square, and I love Paulie Gee’s, Piece, My Pi and Pizza Friendly Pizza, or head to John’s on Western Avenue for some tavern style. Going to a White Sox game? Stop off at Phil’s before the game on 35th for tavern-style or Pizza Fried Chicken Ice Cream on 31st Street.  Did you fly into Chicago via Midway? Then don’t miss Vito & Nick’s!  This list could go on way too long.

PMQ: I imagine you’ve seen a lot of pizza shops come and go in Chicago. If someone tells you they want to open a pizza shop there, what kind of advice would you give them beyond keeping the quality of their food high? What does a newcomer need to know about the business side?

Porter: Chicago is a city of neighborhoods and local communities. You have to make sure, when selecting a location, that you aren’t hurting another local favorite and that you endear yourself to the community you are going to be serving. Authenticity is important, and making a positive impact is important to Chicagoans. Most of the places I’ve seen close their doors were in this for the money solely and couldn’t understand why customers took their business elsewhere.

PMQ: If you could only eat one variety of Chicago pizza for the rest of your life, what would it be and why?

Porter: Tavern-style. It’s what I grew up on. It makes up the majority of the pizza in Chicago, and it is no doubt the pizza that Chicagoans do best. You don’t just start a pizza tour without having a huge love for all styles, but the tavern style is my jam.

PMQ: What’s the most fun part of your job?

Porter: At the risk of sounding cheesy—no pun intended—it’s the people. I love meeting the guests, more than 85,000 of them in the past 12 years coming from all over with the intention to break bread with us. But it’s not just the guests; it is also the restaurant owners, the servers, the cooks, the bussers that give me a fist bump as we leave, and the entire pizza community. The relationships extend well beyond Chicago, and even the United States for that matter. The pizza community is a collection of eclectic individuals that make this industry such a family.