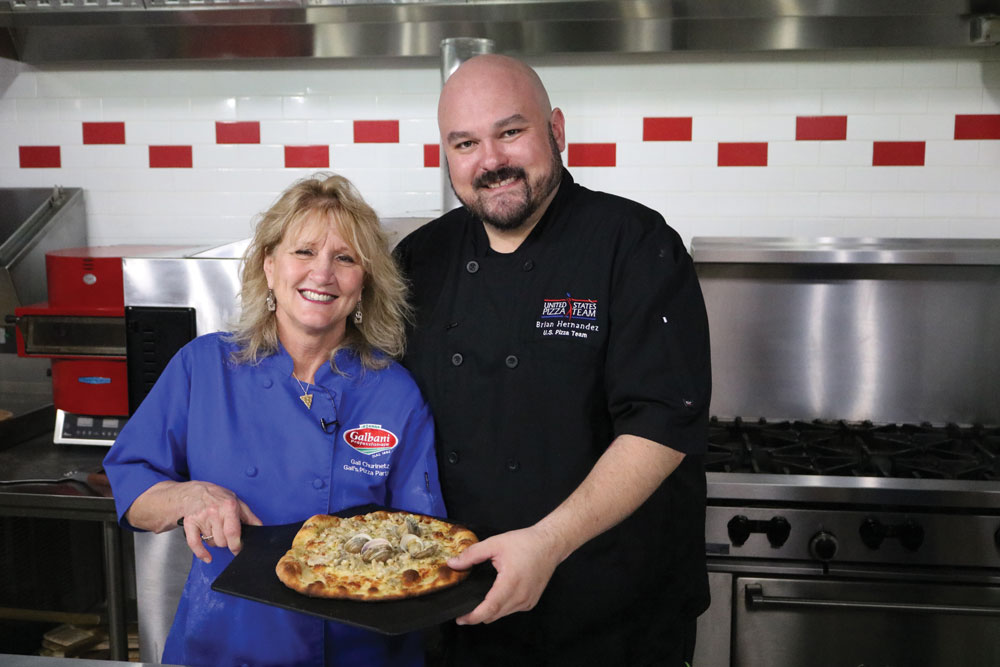 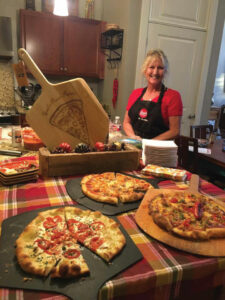 We all know pizza comes in many sizes, shapes and flavors. And it’s remarkably easy to get your hands on, from delivery to dine-in and even drive-thru slice windows. For pizza fans in the Memphis, Tennessee, area, Gail Churinetz makes it even easier—as owner of Gail’s Pizza Parties, she will show up at their home with all of the ingredients for a private pizza party and walk them through the steps of making it in their own kitchen. Churinetz has a colorful and accomplished background in the culinary industry, including prize-winning appearances on the Food Network. While she loves the fun and glamour of the restaurant industry, she doesn’t like to be anchored to one location, which is why serving as Memphis’ reigning queen of the at-home pizza party is the life for her. Luckily, PMQ’s Brian Hernandez was able to sit her down long enough to get some tips for running a traveling pizza business.

Hernandez: What is your earliest pizza memory?

Churinetz: When I was small, my grandparents owned a bakery/pizzeria in Schenectady, New York. I remember always having fresh pizza and pizza fritte. Sometimes we would have the fried dough for breakfast with a little powdered sugar on it, but my grandparents were always bringing home pizza.

Hernandez: What exactly do you do at Gail’s Pizza Parties, and how did that come about?

Churinetz: I offer in-home pizza parties to anyone looking to have an interactive pizza experience or just sit back and be fed quality pizza. I bring all the ingredients and tools, and we make pizzas in your home oven. It can be very hands-on and interactive if you want to get your hands dirty, or it can be like a normal catering job—and you don’t have to worry about making the food or clean-up.

My family relocated from the New Haven, Connecticut, area to Memphis 24 years ago, and our family’s tradition was having pizza at least once a week. We could not find good pizza in Memphis at the time, so I started playing around in the kitchen making my own. The only variable was the water. The water in Connecticut has a higher mineral count, giving you a crunchier crust. So I started importing my water from Connecticut, and to justify importing water, I had to make pizzas for more than just my family. I started doing them for other families as well, and it snowballed. Then I started entering competitions. When I won my first competition, I think what really wowed the judges was that crust using the Connecticut water.

Hernandez: Do you have a set menu, or do you let the customers decide what they want?

Churinetz: Both, actually. I do have a set menu. I try to stock it with the current flavor trends of the industry. I take a lot of inspiration from my friends. I took a pie from Will Grant of That’s a Some Pizza in Washington and tweaked it and called it the Will Grant. I also take recipe ideas from friends and make them my own. I usually name them after the person that gave me the inspiration. But the customer can always just tell me what they want to eat, and that’s what they get.

Hernandez: What is your favorite ingredient to work with?

Churinetz: I’d have to say shaved shallots. Get them thin enough and they are all surface area, which means more flavor.

Hernandez: What ingredient do you hate the most?

Churinetz: I’d have to say the combination of pineapple and ham. Not a fan. I will make it if that’s what the customer wants, but I will find a way to put a twist on it. 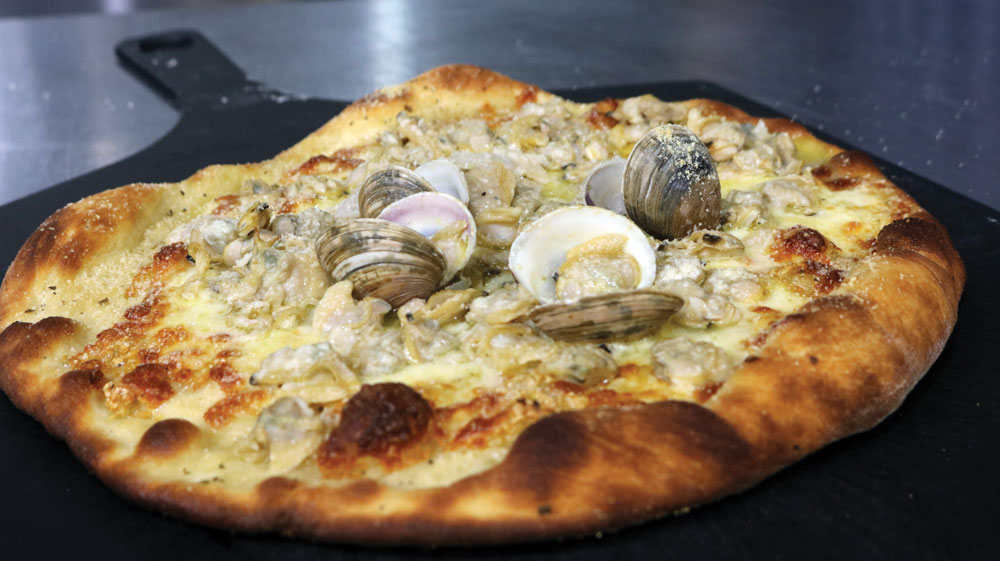 Hernandez: Tell us about your crawfish and andouille sausage pizza.

Churinetz: While visiting Louisiana one time, I had my first crawfish boil and real andouille sausage. I got inspired to mix Yankee flavors with some French Cajun flair and came up with [what came to be known as] the “$25,000 Pie.” I had the chance to compete on the Food Network’s Ultimate Recipe Showdown, hosted by Guy Fieri. I was one of 10,000 home cooks chosen to compete. I competed with [this] pie, and it won $25,000. So it got renamed.

Hernandez: How did you end up competing on that show?

Churinetz: I was watching the Food Network one day and saw Ultimate Recipe Showdown and just thought, “I could do that.” So, when the next season approached, I reached out and submitted a recipe and was ultimately chosen to compete; I made the semifinals but did not win. Then I tried again the next year, tweaked my recipe a bit and won $25,000! After that, I was put on a short list to appear on other shows and competitions on the network. But I have always been competitive, from things like tennis to yard of the month. I think you need that drive to keep you evolving—otherwise, you’re standing still.

In fact, oddly enough, I know one of the U.S. Pizza Team’s newest members, David Conti. He basically lived around the corner from me in Connecticut, and we have been friends for years. I talked him into starting to compete. Then, behind my back, he went out to the West Coast U.S. Pizza Cup and won a trip to Italy. Again, I said, “I could do that.” So I reached out to you immediately to get on the team. Now I have competed in several U.S. Pizza Cups with the team, and I love it—the camaraderie between everyone, but also that friendly competitive spirit.

Hernandez: Is competing important for a pizza business or an individual pizzaiolo?

Churinetz: Absolutely. Again, it keeps you evolving. You are always learning something new at every event. There are so many people and ideas there that can only help you in the end. If you don’t learn at least one thing every time you compete, then you’re doing it wrong.

Hernandez: Now we’ve come to the dreaded Scott Weiner’s Lightning Round! I’ll give you three ingredients, and you tell me how you would incorporate them into a pizza or dish. First one is Gorgonzola cheese.

Churinetz: That is actually on my Will Grant Pizza. I use shaved shallots, Gorgonzola, pine nuts and some provolone.

Hernandez: OK, that was a “gimme.” How about banana peppers?

Churinetz: Well, I have a pizza called the HTS (Hotter Than S—) pie that uses a variety of peppers. It has pepper jack cheese, various hot peppers and red pepper flakes. I think the tanginess of the banana peppers would offset that heat.

Churinetz: I actually do a pie with fresh mozz, chopped spinach and chopped tomatoes. Drizzle a little olive oil on there after the bake.

Hernandez: What were you doing before you started Gail’s Pizza Parties? You were working with dough, right?

Churinetz: Yes, I was hired as a part-time consultant at ACH Food Companies—which owns such products as Fleischmann’s Yeast and Karo Syrup—to do bread testing. They had just come out with a bread mix for the home cook, and I was brought in to test their product. I would then give analysis and help them adjust the recipe as needed.

Hernandez: So you are responsible for testing and feedback of some consumer bread products that we see in the grocery store?

Churinetz: Yes! I have three out there now, the most recognizable being the Simply Homemade bread mixes.

Hernandez: One last question: What is your best tip for dough production?

Churinetz: Definitely weighing and being consistent. If you need to adjust your formula, do it one variable at a time. If you change everything all at once, you don’t know which variable was affecting your formula. Make the adjustments in steps and keep track of everything. Write down all the weights and measurements and what about that particular dough you do not like or wish to change. Change one item at a time and see what was affecting it and take notes. 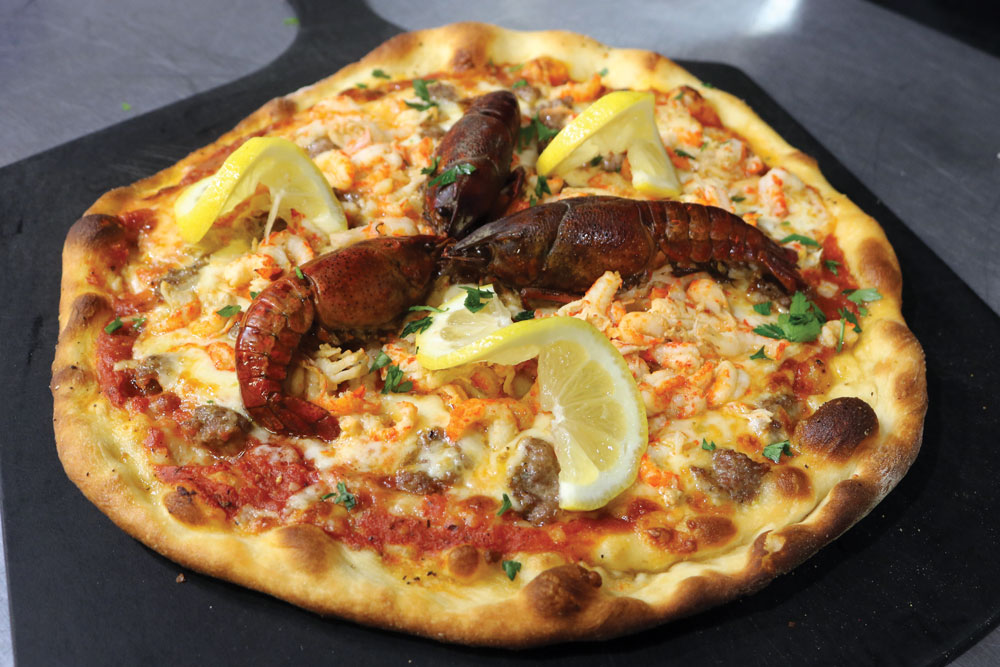 Remove the dough ball from the refrigerator and leave covered at room temperature until the dough warms to 65°F. Place a baking steel in the oven and preheat to 500°.

Roll out the dough until very thin. Sprinkle ½ tsp. of polenta or cornmeal onto a pizza peel. Place the rolled-out dough onto the peel and spread olive oil all around the edge of the crust. (Avoid getting oil on the peel, or your pizza may stick when you try to put it in the oven.) Add about ¼ c. of pizza sauce to the middle of the dough and spread it to the outer edges, leaving about a 1” crust. Add mozzarella and pepper jack cheeses. Top with raw sausage and drizzle with olive oil.

Bake for 10 minutes or until edges are golden-brown. Remove the pizza from the oven and top with crawfish. Place the pizza back into the oven for an additional 2 minutes to heat the crawfish. Garnish with lemon zest, crawfish and parsley.