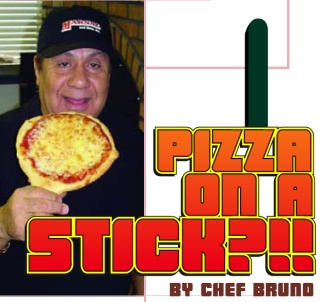 It is always said that the first person to do something is the one who is remembered for it.

I was grocery shopping one day with my family when my youngest son, James, took me to the ice cream aisle. He picked up a box of ice pops and took me to another aisle where he picked up a box of lollipops. It sparked an idea. I began to think to myself, "How can I make pizza on a stick?" At first, I thought it was impossible. I went to my oldest son, Louis, who is also a chef, and he thought it was strange. He asked how I would make a handle for a pizza. I started doing some research and thought about how doctors use tongue depressors and thought if was good enough for a doctor to stick it in a patient's mouth, then a pizza handle could be used for this idea.

I found a company that made tongue depressors, but they couldn't make them for me and my idea, but I was able to get some of the wood they used to try and make my own. The first three sticks I made were too small…the second three were too large. Then, I started to think about what would be the perfect size that would fit inside someone's mouth and the process started. I knew the dough had to be firm so it wouldn't fall off the stick. A lot of changes were made. Finally, after what seemed like a million tries, I got it right.

When I did my test run and people saw the pizza on a stick, it confused them and they thought I was crazy. But, I knew I was on to something totally different. I knew I had made history in the pizza industry with this totally new idea that was different from everyone else. I still had to make some adjustments on the dough to improve it, and I had to have it ready in time for the Food Network Challenge: Pizza Battle. At this show I debuted the product and earned a silver medal. The judges also commented that they thought I had made history. So you see, even when the idea may seem strange to some, never give up because there is no telling how far you can go or how much you can achieve. Who would have ever guessed that guy in New York would have sold 200 $50 hamburgers in the first four days…or have the idea in every newspaper and news broadcast in the nation.

Here is a photo series that shows how the pizza on a stick idea is created. Try it, play with the idea. If you would like to learn more about this concept or recipe, contact me at 631-226-6688 (phone), 631-226-6890 (fax) or marsalsons@aol.com. Become the first in your area to offer something new…you never know where it will take you.