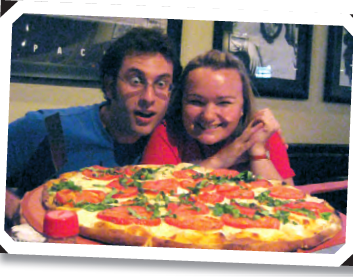 While in Orlando for the Florida Restaurant & Lodging Show and the PMQ Orlando Pizza Show, I teamed up with our culinary emcee for the Orlando Pizza Show, Scott Wiener from Scott’s Pizza Tours in New York, for what Scott called a “pizza safari” through the streets of Orlando. We hit some of Orlando’s most popular pizzerias and also asked locals for some recommendations of their favorites. Luckily, many of Orlando’s hot spots offer pizzas by the slice, which made it easy for us to visit a number of places. We persevered through innumerable toll roads, lightning, thunderstorms, theme-park tourists and a GPS that insisted we turn left four times (leading us to the same lake over and over again)—all in an effort to eat as many slices as possible in the span of two button-busting nights. Scott has a humor all his own and loves to wax poetic about food. My input is all business, while Scott’s comments help lend a consumer’s perspective, which is why you’ll find separate commentary from us below. 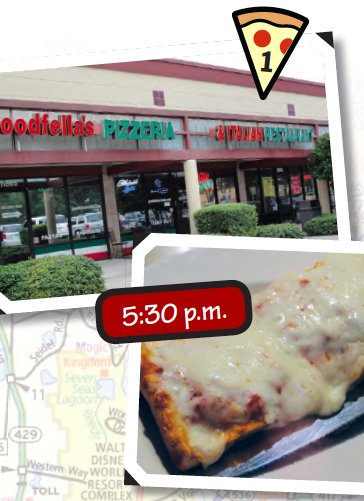 Liz: There are two memories that stand out in my mind about our visit to Goodfella’s Pizzeria & Italian Restaurant (goodfellasorlando.com): The Sicilian slice we ordered was accompanied by steak knife; and, although we were in Orlando, a large group of New York-bred patrons who sat nearby helped reassure us that we had found an authentic New York-style pizzeria. Owners Sal Ciaccio and Marco DiIorio are both originally from Italy and were raised in New York. They’ve co-owned and worked fulltime at Goodfella’s for more than 10 years, helping the pizzeria win multiple awards from Citysearch and AOL CityGuide.

Scott: Started by a couple of New York expats, Goodfella’s is a strip mall restaurant with a full Italian menu. Unlike most sit down restaurants in New York, Goodfella’s is happy to serve guests pizza by the slice. The cheese pizza we started with was solid comfort slice that folded well and held together with the aid of a continuous cheese layer and a crust that had decent chew.

Scott: The menu at Anthony’s Pizzeria & Italian Restaurant (anthonyspizza.com) had plenty of options when we arrived to meet up with a couple of my pizza tour alumni, but we went with a full Mediterranean pie, plus a few rogue slices. The basic cheese slice was the best of the bunch, with just the right amount of mozzarella cheese atop a properly sauced base. The Sicilian slice had plenty of cheese—possibly too much for just one slice. Our waitress recommended our third slice, which she concocted: spinach, pineapple and garlic. We should have stuck with the cheese pizza.

Liz: Weather in Orlando is fickle. A beautiful day turned into a thunderous rainstorm by the time we hit the patio of Anthony’s. Since its opening in 1986, the pizzeria has won numerous awards as Orlando’s best, and this original location in trendy Thornton Park is a definite draw for locals who want to hang out on the patio and watch passersby while ordering from the extensive menu of pizzas, Italian specialties, salads and subs. 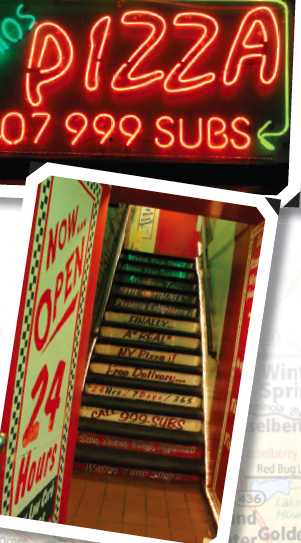 Scott: Every downtown needs a place like Gino’s Pizza & Brew (ginospizzaandbrew.com). The neon is bright, the pizza is hot, you get a free garlic knot with every slice, and the place is open 24 hours! They even have a meeting room upstairs for all of your important corporate conferences. The place is seriously cool, but it would all be for naught if the pizza wasn’t so good. A bit pricey for a slice ($4), but at least you get a free garlic knot. This is a solid late-night stop, and I think the world would be a better place if every had one of these right next to the post office.

Liz: We were recommended to Gino’s by one of slice mates at Anthony’s. We found the pizzeria that touts the motto, “Have a slice and you’ll want it twice!” in bustling downtown Orlando (there are three Gino’s locations downtown). Open 24 hours per day, 365 days per year, the Orange Avenue store’s design is authentic New York, complete with counter service and neon signs. Patrons enjoy specialty items (such as chocolate cannoli and tiramisu) not easily obtained elsewhere in the area, as well as free delivery (also 24 hours per day, if within walking distance) and a receipt-based loyalty program.

Liz: NYPD Pizzeria (nypdpizzeria.com) was the first stop on our second day of pizzeria visits, and when we showed up to meet with NYPD owner Paul Russo, franchisee Jeffrey Longo, and director of sales and marketing Mallysa Byrnes, they were serious about us sampling the menu. By the time we left, we had tried garlic knots, chicken wings, fried ravioli, the Astoria Greek Salad, fi ve different types of pizza, a cheese calzone and zeppole for dessert. We learned from Russo that the store’s NYPD Pizzeria logo is trademarked internationally, making the pizzeria the only official NYPD Pizzeria in the world. Opened in 1996, the franchise has won dozens of local awards for best pizza in Orlando and has since expanded to 10 locations across the country. One of the most popular in-store promotions, according to Longo, is the pizzeria’s 99-Cent Slice Calendar, a pocket-size calendar that lists rotating slice specials for each day of the week. When a customer gets the calendar punched seven times, he receives a free 14” cheese pizza.

Scott: I’m always a little skeptical about a place that so closely aligns itself with New York City, but NYPD real deal. The decor is very heavy on the NYC angle, but in a humorous way. As for the pizza, it’s just like what you’d expect in New York: The cheese is ooey-gooey and the sauce provides subtle peaks of sweetness. But the true test came with NYPD’s soft yet resilient crust. This is a crust that folds but doesn’t crack, a crust that works with you instead of against you. It would be a shame not to mention the calzone, a true cheese bath awash inside a crispy-tender shell. This place exists because founder Paul Russo had a hard time finding good pizza for the boy bands he used to manage on the road. I hate to say it, but this pizzeria gives me a whole new respect for the Backstreet Boys. 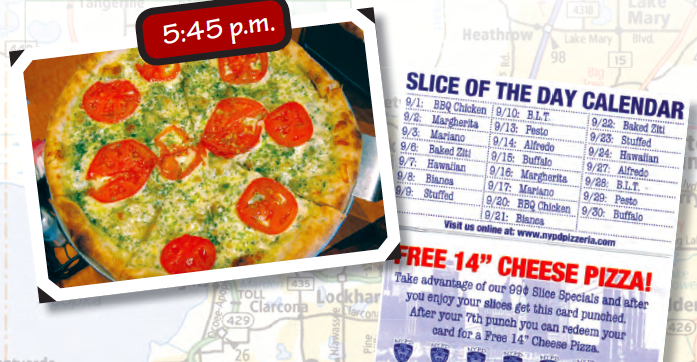 Scott: I had heard a lot about Anthony’s Coal-Fired Pizza (anthonyscoalfiredcom), so the bar was set pretty high. The visit started well with an order chicken wings, which were baked in a coal-burning oven just like the pizza. Actually, the pizza and wings are baked in separate ovens due to different temperature requirements, but they both achieved a lovely crisp on the exterior.) My favorite part of the wings was the heaping helping of caramelized served on top; it’s such a perfect complement to the wings and a creative way to add moisture to the dish. We couldn’t decide between the traditional cheese pizza or the pizza with fresh mozzarella, sliced tomato and basil, we ordered both. True to the slogan, Anthony’s pies are “well-done,” an evenly baked dark crust. The texture was a bit on the crunchy side, the cheese provided a necessary amount of chew.

Liz: Anthony’s Coal-Fired Pizza may have 26 locations today, but in 2002, when Anthony Bruno decided to leave his restaurant of 25 years, Runway 84, to start a coal-fired pizzeria, he was acting on pure instinct. All he knew was that Floridians deserved to experience coal-fired pizza. Ever since, the popularity of the pizzeria has grown as hungry patrons file in to sample from a menu that includes specialty pies cooked at 800°F with toppings such as broccoli rabe, arugula, sweet peppers, baby meatballs, caramelized onions, eggs, fried eggplant and more. Bruno has been called a pizza pioneer in Florida and follows the belief that you’re only as good as your last pizza.

Liz: I knew when we pulled up to Renee’s Mama Mia’s Pizzeria (mamamias-pizzeria.com) that the place was different. The octagon-shaped building looked like something out of the ’50s, and there was nothing else around for blocks. We had been recommended to the pizzeria by an Orlando Pizza Show attendee, and when we walked in, manager Kevin Anderson saw Scott and I and immediately asked, “Are you coming from the pizza show?” If we weren’t both wearing pizza-themed shirts, I would have thought the guy was psychic; turns out that the customer tipped him off that we might be showing up. The best way I can describe this pizza stop is “dinner and a show”—complete with an offer to go on a police ride-along. While we ordered only one pie, we were at the pizzeria for nearly three hours while Anderson told us tales about the crossover between his life as a pizza man and a sheriff’s deputy. Who knew pizza could be so intense? 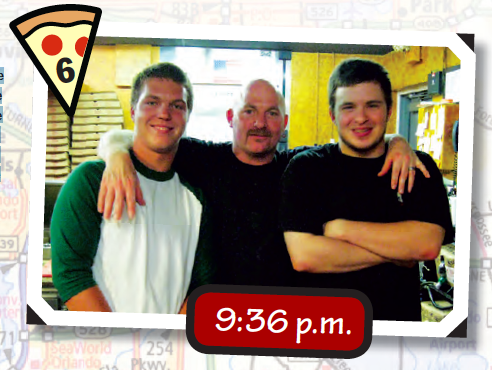 Scott: Of all the stops we made in Orlando, Renee’s Mama Mia’s had to be my favorite. First, they get points for a confusing name. The original Mama Mia’s apparently didn’t have the best reputation, so owner Renee Besuden added her name when she bought the place. Her brother, Kevin Anderson, who was running the pizzeria when we arrived, is an absolute gem. He’s a pizza man by night and a sheriff’s deputy by late night. No need for a television or radio; Kevin listens to the police scanner while he’s making pies. We were fortunate enough to overhear a car-jacking going down while sampling a half-cheese/half-white pizza (don’t worry, they busted the perps), and Anderson’s crust was dead-on, a real victory for the city of Orlando. It has a beautiful crumb structure with a texture that both gives and relents as you bite into it. No shortage of cheese here—a solid pie that I’d happily eat again.