Check out these 5 trendy takeaways from the 2015 NRA Show! - PMQ Pizza Magazine 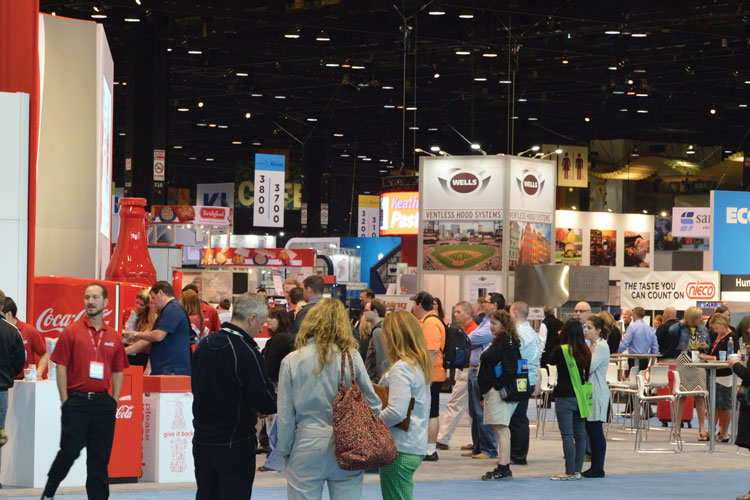 Fast-casual pizzerias are sprouting up across the American landscape faster than mushrooms after a warm summer rain, outnumbered only by pizza loving millennials (a catch-all term for those born between 1982 and 2004, give or take a couple of years). So it’s no wonder these two topics dominated panel discussions at the 2015 National Restaurant Association Show, held May 16 to 19 in Chicago. Like it or not, pizza marketing is evolving rapidly, and smart operators need to keep up to stay on top. PMQ attended a wide range of educational sessions at this year’s show and sniffed out several noteworthy trends to share with our readers. Here are five key takeaways:

1: Millennials On the Ascent

It’s not just that so many educational sessions at this year’s NRA event had “millennial” in their titles. One glance around the vast McCormick Place exhibit halls revealed squadrons of casually dressed, protein bar-munching, iPhone-jabbing young people. That’s not surprising, since Pew Research Center statistics show that millennials in 2014 topped Generation X and baby boomers in workforce participation. According to Peter Harrison, chief executive with the online job placement firm Snagajob, millennials will make up almost 50% of the American workforce by 2020.

Hence, millennials reflect a rising tide of restaurant buying power, says Hudson Riehle, senior vice president of the NRA’s Research and Knowledge Group. This demographic, which he classifies as 18-to-34-year-olds, has cash to spend, enjoys dining out, and is best characterized by its digital independence. “They’re not tied down to desktop computers,” Riehle said. “About 90% use tablets or digital phones, compared with about 60% of consumers between 45 and 64, and only 34% of those age 65 and up.”

In fact, many millennials—particularly in urban America—aren’t even tied down to permanent addresses or cars, Riehle noted. So what can this wristwatch-shunning tribe of foodies teach restaurant operators? Be flexible, Riehle advises. Four out of five operators are moving toward changing their menu prices depending on the time of day to accommodate snack-happy millennials. Tactics such as off-peak discounts and one-time tweeted online coupons meet these impulsive youngsters’ craving for convenience. And social media and mobile marketing have become indispensable channels for reaching millennials. “Operators are missing an important opportunity if they don’t use technology as a tool to communicate locations, menus, reviews, and takeout and nutrition information,” Riehle adds. “In the past, diners came to restaurants—now information-savvy millennials want restaurants to come to them.”

And they want you to bring them something a little different while you’re at it. When it comes to pizza toppings and sauces, Darren Tristano, executive vice president at the foodservice research firm Technomic, notes that pizza eating millennials embrace variety, customization and quality. “They want to be engaged with nontraditional premium toppings, such as artichokes, eggplants and crumbled meatballs,” Tristano said. “They’re inclined to try bolder sauce flavors—barbecue, pesto, herb butter and ranch dressing—topped with artisan cheeses, including blue, feta, Gorgonzola and ricotta. Younger, health-conscious consumers are also eager to sample specialty grain crusts with allergy-preventive options, including gluten-free, dairy-free and vegan varieties.”

Fast-casual entrepreneurs have moved aggressively in recent years to grab a share of the pizza market. It’s worth noting that two of the four panelists in this year’s National Pizza Council session have launched fast-casual pizzeria projects. Fred Morgan started Fired Pie (firedpie.com) two years ago. Now, he operates 10 units in Arizona and has three deals in the works. “We use the Subway/Chipotle model, and we’ve reached double-digit sales in our first store,” Morgan said.

Morgan’s fellow panelist, Sean Brauser, built the more traditional Romeo’s Pizza chain (romeospizza.com) in Ohio. But he has been impressed by the rise of fast-casual pioneers, such as Blaze Pizza (blazepizza.com), Uncle Maddio’s (unclemaddios.com) and Pie Five (piefivepizza.com). “I worked my way up in the pizza business and bought a mom-and-pop store, where we’ve worked unbelievably hard to do things the right way and offer our loyal customers great value,” Brauser said.

Even so, Brauser sensed a change in the marketplace and didn’t hesitate to act. He recently opened his first fast-casual restaurant, PizzaFire (pizzafire.com), in Akron, with three more in development. “A traditional approach to pizza, like Romeo’s, works—it’s a proven formula,” he said. “But there is no denying that the fast-casual concept is a force in the industry, especially for younger customers. We believe fast-casual will complement our traditional pizzerias.”

Morgan and Brauser agreed that millennials are lighting the fuse for the fast-casual explosion. And Tristano has the numbers to back it up: Overall, the fast-casual restaurant segment has grown by 14% over 14 years, he noted. Compare that to the growth of limited service (4.1%), quick service (3.3%) and quick service pizza (2.1%), and it’s clear that fast casual is leaving the others in the dust. College towns, which are havens for millennials, are an ideal setting for fast-casual’s pizza-as-theater approach. It’s no accident that Brauser plans to place his next PizzaFire store in South Bend, Indiana, home of Notre Dame.

The question is, are these fast-casual operators really offering anything new? Not necessarily, said panel moderator Marla Topliff, president of Rosati’s (rosatispizza.com), a traditional pizza chain with locations in six states. She says legacy operations like Rosati’s have always embraced the fast-casual credos of customization and creativity. “If you look at how independent pizzerias evolved in urban centers like New York and Chicago, we’ve always taken the freshest ingredients and made everything to order for our customers,” she said. “Pizza is growing all over the country. Independents are adding units and becoming chains because they make good pizza and people love their food.”

3: Charity Begins in Your Pizzeria

It’s more important than ever for pizzerias to act as good corporate citizens in their communities. According to a 2014 study on dining ethics by the Culinary Visions Panel, 73% of respondents said they like to patronize restaurants that support their local communities or charitable causes.

Few operators understand that better than Pizza Panel speaker Sue LaTour, co-owner of Macomb County, Michigan-based Passport Pizza (passportpizza.com), with 14 locations in the Wolverine State. With 31 years in the pizza business, LaTour and her husband, Mike, have earned accolades for Passport’s hefty menu, featuring specialty pizzas like the two-foot behemoth called Big Ben and award-winning ribs. But it’s LaTour’s personal passion for fighting hunger and food waste—and giving back to the less fortunate—that has resonated nationally. She received the NRA’s 2014 Good Neighbor Award for serving as a conduit for restaurants, vendors and grocery stores donating leftover food to nonprofits, shelters, pantries and soup kitchens throughout Macomb County.

“We change the lives of the people we deal with, and that is the biggest reward we can enjoy at Passport Pizza,” LaTour says, adding that community involvement is the single best way to promote your pizzeria. “The churches and businesses who help us donate and distribute food have become our biggest supporters around the state. The publicity we’ve been blessed to receive has created thousands of new Passport customers. Once someone tries out food, they’ll be back.”

Unfortunately, Michigan law was getting in the way of pizzerias trying to do the right thing. The LaTours were prominent backers of Michigan House Bill 4017, which amended the Michigan Food Law of 2000 to extend immunity from criminal and civil liability to those who donate food to nonprofit organizations helping the needy. Governor Rick Snyder signed the bill into law on June 3. “This law will be a major help in sharing our excess food with the state’s growing ranks of hungry citizens—especially children,” LaTour said. “And it has a side benefit of reducing waste in Michigan’s landfills by 10% to 20%.”

4: Brand Loyalty Is a Two-Way Street

Building strong customer relations is more important than ever in the digital age. That was the message conveyed in an NRA session on product innovation. Discussing Pizza Hut’s (pizzahut.com) recent efforts to launch an array of new menu options, Dominique Vitry, the chain’s director of food innovation, said, “We understand food innovation is a science, but it’s also an art. The success you have in the test kitchen doesn’t always translate into sales in the restaurant.”

Vitry knows that from personal experience, thanks to the sluggish sales of her company’s revamped menu, which includes 10 new crust flavors, 11 new specialty pizzas and four new sauces. Vitry made it clear that feedback—particularly via social media tools that younger, hipper consumers use to communicate with brands—must be constantly monitored and evaluated. Sometimes consumer rejection of a product “might be a result of the wrong messaging instead of the wrong variety of balsamic vinegar in one of our drizzle sauces,” she added. “We have to continue asking: ‘Why is this product relevant to the consumer?’ We believe our new menu items answer a compelling demand—especially among millennials—for healthier, fresher, bolder taste options. That message might not have fully sunk in yet, but we’re not about to give up.”

Achieving two-way communication with customers is Pizza Hut’s goal, Vitry noted. Sometimes old-school outreach is the best tool. “We want to make consumers team members,” she said. “We’re more active than ever in sponsoring local Little League teams around the country. We promote those relationships on our social media outlets, and our leadership closely monitors the volume and quality of our Facebook impressions at our corporate headquarters in Louisville,” Vitry said.

Additionally, Pizza Hut has placed millennials on its marketing and food innovation teams. The company also counts on a “We Want to Know” email feedback system to get real-time input from its worldwide workforce.

Sustainability means different things to different people. At the NRA Show, applications ranged from using leftovers efficiently in soups and casseroles to refraining from serving sea bass. Regardless of how the word is used, it’s a marketing message that sells. According to a 2014 Technomic study, 63% of surveyed consumers said they would be more likely to visit a restaurant that emphasized sustainability and social responsibility. Customers under 45 are more likely to be conscious consumers, the study found. And the NRA’s own Culinary Forecast for 2014 listed environmental sustainability as the No. 3 most important trend in the restaurant industry.

Chef Susan Feniger, co-owner of Mud Hen Tavern in Los Angeles, knows a thing or two about creating healthier menus with an emphasis on sustainability. Her restaurant serves up gourmet pub food with an unapologetically pro-environment stance. During a lively NRA session on sustainability, Feniger said restaurateurs have the power to not only meet health-conscious consumers’ demands for more nutritious fare, but to create that demand—all while contributing to a healthier ecosystem. “We’re committed to recycling cooking oil to fuel our delivery trucks. We’ve taken bottled water off the menu,” she said. Feniger has also taken a stand for less meat consumption. “We try to serve plates with 80% plant and 20% protein, which is a better way to eat and better for the planet,” she said.

Chef Douglas Katz, owner of several Cleveland-area fine-dining spots, admitted it’s more expensive to source ingredients from local farmers’ markets, avoid overfished seafood, and use antibiotic- and hormone-free meat. But he adds that the PR benefits and boost to his team’s morale more than compensate for the extra costs. “Part of my job as owner is to educate staff as to why we strive for sustainability,” Katz said. As they develop a better understanding, he added, “I find our kitchen staff is excited about the food we prepare. When they see farmers carry produce in the restaurant’s back door, they’re more motivated as cooks, and they communicate that excitement to our waitstaff, which brings that information to the table.”