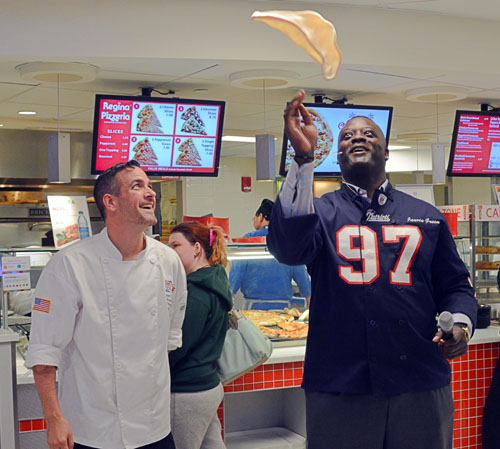 Culliton's performance was live-streamed from the Chef's Playground, home of the Kids Culinary Academy, into patients' rooms so everyone could watch. The Kids Culinary Academy offers healthy cooking lessons to children, with recipes that they can reproduce at home. "We are committed to bringing healthy food to the patients, families and caregivers at the hospital, and bringing in a champion pizza spinner is a great way to connect with the kids and start the conversation about the importance of healthy eating," said Summer Menegakis, Marketing Operations, Boston Children’s Fresh Food Court.

Culliton is in Boston representing the U.S. Pizza Team at the New England Pizza Conference Tuesday at the Haverhill Country Club. The event is co-sponsored by Colony Foods and PMQ Pizza Magazine. More than 150 New England and national pizzeria operators and food distribution executives will enjoy a full day of speakers and activities. "It was an honor to be able to perform for the children of Boston's Children's Hospital," Culliton said. "My nephew had heart surgery here three years ago. It means a lot to be able to bring joy and give back to this wonderful facility."

Culliton has competed at the World Pizza Championship seven times for the Groupon USPT. Before his 2016 title performance, he had won second place the previous two years. Culliton demonstrated his behind­-the-­back and between­-the legs dough-twirling tricks on Monday morning for delighted children and the Boston Children’s staff. In addition to the pizza spinning performance, Jarvis Green, formerly of the New England Patriots also made an appearance on the Chef's Playground. Culliton met with Green and showed the former football star how to spin pizza dough on the hospital's live feed.