Cash in on Wi-Fi, smartphones and tablets to become your area's go-to restaurant for digital entertainment. - PMQ Pizza Magazine 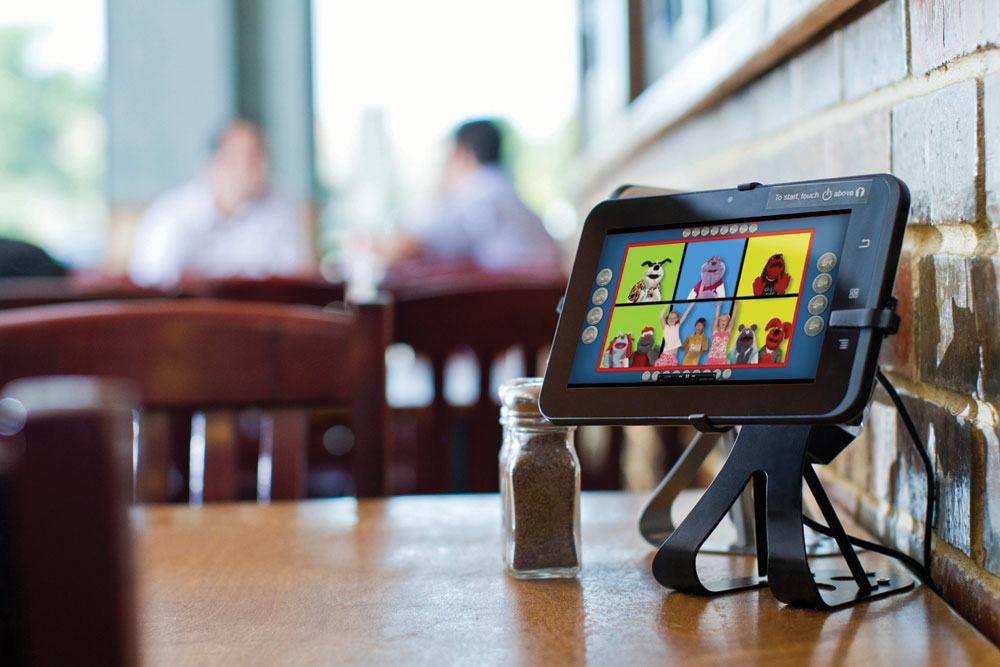 From Pong and Pac-Man to iPhone apps and touch-screen tablets, digital entertainment in the restaurant environment has evolved faster than you can say “Donkey Kong.” And now, thanks to the ubiquity of Wi-Fi, the options have expanded to include everything from e-books and video poker to remote-controlled jukeboxes and “American Idol” on your Android.

According to The NPD Group, a consumer research company, approximately 50% of home diners watch a TV show or video while eating dinner. So it’s no surprise that patrons often choose a restaurant because it offers convenient viewing of popular sporting events, and, increasingly, other programming geared toward families. But TV is just a part of the revolution in digital entertainment. Boredom-banishing content such as music videos and cartoon-playing kiosks give customers another reason to come back to your pizzeria for repeat visits. And families with children especially appreciate the plethora of entertainment options, if only because a child who’s focused on a game or a TV show is a child who’s sitting still and staying out of trouble.

Television in restaurants isn’t a new concept, of course, but pizzerias now market their TV programming more aggressively, thanks to services such as TV sports packages that carry every single pro football game being played on any given Sunday.

“Competing with sports bars on the Strip is difficult,” says Michael Jasilewicz, vice president of operations for Titan Brands, which owns Slice of Vegas Pizza (sliceofvegaspizza.com) in Las Vegas. Located in The Shoppes at Mandalay Place, the casual but upscale pizzeria has 12 large flat-screen TVs and a massive projector screen. “Visitors frequently choose to watch sporting events here over other places because of the sheer number of televisions we offer, the opportunity to have a private space if requested and the visibility of numerous games in one spot,” Jasilewicz adds.

Slice of Vegas offers NFL specials throughout the fall as well as March Madness specials during college basketball season. “We have DirecTV on all televisions and the projection screen,” Jasilewicz says. “Customers can come and watch with their children or with a group of friends.”

Russell Edwards, the owner of Rudino’s of Holly Springs (rudinosofhollysprings.com) in Holly Springs, North Carolina, says his DirecTV packages also bring in sports-minded customers for the big games. “I always try to make my store a restaurant that acts like a sports bar,” Edwards says. “I have six big-screen TVs, and we offer DirecTV’s NFL Sunday Ticket on Sundays. So families can come in with the kids and not have to worry about loud noises and smokers like you’d find at sports bars.”

Rudino’s also provides tabletop units with old-school video games such as Pac-Man. “I rent them from an amusement company that takes care of the maintenance. My older patrons like these games,” Edwards says.

Of course, not every customer wants to watch—or play—a game while feasting on your pizza. Some apps allow pizzerias with multiple TVs to offer a variety of channels without creating a cacophony of noise. Sound from multiple TV channels is distributed via Wi-Fi and transmitted to each customer’s smartphone or mobile device. Controls on the app’s screen allow guests to pick from among the TV channels being displayed by the host restaurant. That means Dad can tune into the Packers game, while Mom enjoys The Voice and the little ones watch The Disney Channel. “This might not be an ideal family setting, but it is better than being at home watching different TV programs in different rooms,” observes Joe Kirley, president of Shaws-Lawson Technologies. “It can also occupy multiple children, each of whom can watch a different channel while their parents enjoy a quiet meal.”

“I have people who come in and want to sit here and play games until their food is ready. So I’m hooked on it—I think it pays for itself.”   —Russell Edwards, Rudino’s of Holly Springs

Games for All Ages

Engaging the entire family is also the goal at Rudino’s, which provides tablets from BuzzTime Entertainment that offer games—such as Texas Hold’Em, blackjack and trivia—for all ages. Rudino’s has featured the tablets for about three years; Edwards stores them in a caddy at his ordering counter, and his customers are encouraged to pick one up and play while they wait for their food. “You get the tablets in groups of five,” he says. “I previously had 20, but that was too many; 10 is just right for my shop’s size, which is about 2,700 square feet. Every night we put them back into their corral with the charger so they charge overnight, and, if one breaks, I just send it back, and Buzztime sends me a new one.”

The tablets interact with two of Rudino’s television sets as well, enabling guests to play poker and trivia on both media. The pizzeria sometimes holds tournaments that are facilitated by Buzztime. All in all, it’s quality, family-friendly entertainment, Edwards says. “Kids love playing the trivia games, while adults play Texas Hold’Em.”

But the tablets offer more than just a good time for Mom, Dad and the kiddies. Operators can also program them to display advertisements that promote daily specials, desserts, wine-and-pizza pairings and future events. The ads appear on the screens whenever a guest finishes a game. “We put our own specials on it, but you could also charge for ads from other businesses,” Edwards says. “We are talking about putting up free ads for other businesses in the strip mall that we are located in, hoping to bring in more business to all of us.”

Because Rudino’s is a counter-order restaurant, Edwards says the ads for specials don’t necessarily translate into immediate upsells. “But it does put ideas in the customers’ minds for their next visit, and it also announces beer specials, upcoming music acts and events,” he says.

Other digital entertainment systems are designed specifically for children. At Brother’s New York Style Pizza Ristorante in McKinney, Texas, iPad-like tablets bearing the trademarked name SPUDnik come preloaded with a “kiddified” operating system and a wide variety of fun activities. Developed by Family Hospitality Group, the SPUDnik features classic e-books, tutorials, art simulators, syndicated cartoon episodes and games. “I almost want to give it a bad review so my competitors will not use it,” jokes the pizzeria’s owner, Doc Vranici. “Some of my competitors have ice cream to help draw in kids. I have the table tablets, and the kids always gravitate toward it and love it. I noticed repeat customers, and they specifically said they came to my shop because the kids wanted to play on the tablets. It’s a great tool to draw in and keep customers.”

A Twist On the Classics

UNO Chicago Grill (unos.com) in Wrentham, Massachusetts, uses the Ziosk system to offer both pay-at-the-table service and digital entertainment, all in one device. Such tablet systems allow customers to view menu items and specials, order from the menu, play games, watch videos and movie trailers, engage with social media, give real-time feedback to the restaurant, and pay the check right at the table, all with a 7” touch-screen placed at each table. But the most popular feature of the tablet, oddly enough, may be the newspaper selection. “I constantly see people reading the paper, mostly The New York Times,” managing partner Chris Dull says. “It’s current to the day and a very popular app. We also have games, and we see families with young children playing them. It occupies the children and also takes the stress off the parents.”

Like online newspapers, the classic jukebox, long a staple of the local pizzeria, has also moved into the 21st century, especially at Slice of Vegas. The pizzeria’s customers download an app from TouchTunes onto their smartphones or other wireless devices, and the app connects wirelessly to the restaurant’s TouchTunes jukebox—a sleek, wall-mounted device with a touch-screen. “Once you have access to the service, you can download songs from TouchTunes and play them from a play-list, or you can play songs directly from the jukebox itself on your smartphone,” Jasilewicz says. Even better, customers who choose songs from the jukebox don’t have to suffer through their fellow guests’ selections, he adds. “For a small fee, you can jump over other people’s songs.”

“Some of my competitors have ice cream to help draw in kids. I have the table tablets, and the kids always gravitate toward it and love it. I noticed repeat customers, and they specifically said they came to my shop because the kids wanted to play on the tablets. It’s a great tool to draw in and keep customers.”
—Doc Vranici, Brother’s New York Style Pizza Ristorante

TouchTunes also offers the PhotoBooth app, which allows guests to take pictures of themselves at the jukebox and share them on social media. The company even offers a karaoke app for singalong nights.

According to a 2012 article in BusinessWeek.com, the TouchTunes system generates an average weekly income of $320 for restaurant and bar operators, selling jukebox songs for 50 cents apiece and karaoke tunes for $1 each. “It’s a crowd-pleaser,” Jasilewicz says. “Kids enjoy the jukebox app and taking pictures using PhotoBooth, but adults enjoy it just as much. The weekends or evenings are when people seem to utilize it most.”

One of the most unique TouchTunes features is the ability for a guest to make a big entrance by programming the jukebox to play his preferred trademark tune as he strides into your restaurant. “Sexy and I Know It” by LMFAO, anyone?

Appealing as they may sound, most of these technologies aren’t cheap, and developing a digital entertainment program should be approached as a long-term investment. It may be a good idea to start out slowly with a few tablets and gauge customer response before taking a plunge into the deep waters. But operators such as Edwards are sold on this new wave of digital entertainment options. In fact, when he had to figure out how to cut costs at Rudino’s, he knew he didn’t want to give up his digital game system. “I have people who come in and want to sit here and play games until their food is ready,” he says. “I don’t know if they wouldn’t come in otherwise, but they like it. And other places nearby don’t have it. I’m just trying to give people a reason to come in here instead of going to the bars. So I’m hooked on it—I think it pays for itself.”