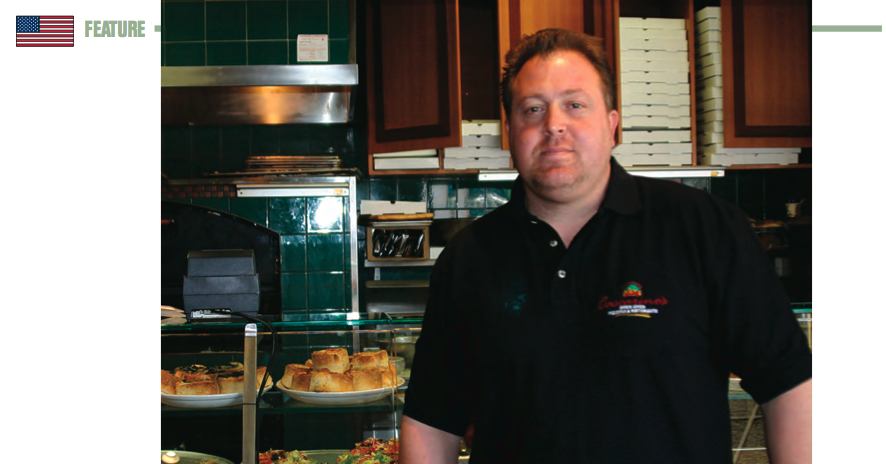 In the crowded world of New York pizza, making a name for yourself is such a challenge that it led Rob Cascarino to serve his pizza on a diamond – a baseball diamond. “Cascarino’s is the official pizza of the New York Mets,” this Queens, N.Y. native says proudly. “After 900 phone calls I finally convinced them they needed family-owned, old style pizza at their games throughout the stadium. This year will be our fifth year.”

Having your pizza brand name emblazoned on huge billboards throughout Shea Stadium certainly cuts down on an advertising budget. Rob says as a result of the exposure in the stadium, he has no need to advertise.

“No advertising. Our advertising is in Shea Stadium with billboards and such. Then there’s the Kiss Cam. Once a game they find people next to each other and they ask them to kiss and they say “from Cascarinos.” We get a lot of exposure from that Kiss Cam.”

Rob started Cascarino’s in 1989 in College Point, N.Y. with his brother Anthony and their mother, Mama Delia Cascarino. He learned the pizza business the old-fashioned way: from the bottom up. “I started when I was 11 years old as a dishwasher,” he recalls. “I worked up to a counter, to a pizza man, to a chef and now I’m in upper management.”

Rob says he got his start as a small business owner out of the generosity of a friend. “The guy I started with came down sick and offered to sell me the business for no money. I started small and took my time and built up a nice business and was able to pay him back in three years. We started with one little 500 square foot pizzeria, now we have seven locations, including Shea Stadium,” he adds with pride.

To go from one store and grow into seven franchises is what Rob says is the result of “a lot of hard work by a lot of people and putting out a good product.”

“The hardest thing about running my business is trying to keep everything fresh and consistent everyday and keep the prices reasonable,” Rob says. “One area where we’ve been fortunate is in low employee turnover. I’ve had some of my employees working with me 18 years. They’re very happy gentlemen, and they keep the business going. It takes 18 to 20 employees to run a store now.” Rob is also proud of another mainstay at his College Point store – his mother. “Mama still makes the meatballs,” he says with a laugh.

WHAT’S ON THE MENU?

Rob says he not only doesn’t advertise, he doesn’t believe in giving out coupons. In order to keep customers happy, Rob says his POS system allows him to track what’s selling. “We really don’t believe in coupons, we like to put a good product out and maybe give away a free soda now and then. The POS system is great for upselling and also for keeping track of what’s selling well and what maybe needs to be rotated off the menu.”

Casacarino’s has a very extensive menu, with over a dozen entrée items, including seafood, steaks, salads and sides. “My biggest selling pizza is my Cascarino’s Grandma Sicilian pizza which is based on a recipe from my mother’s grandma,” he says. “She was from Calabria, Italy. Our best selling non-pizza dish is pasta and our signature chicken dish, Chicken Siena. That’s pan-fried chicken on veal sautéed with mushrooms, slightly thin prosciutto, fresh mozzarella, red wine marsella.”

Rob says watching the market place closely for almost 20 years has taught him several lessons. One of the most important things an operator can do he says, is to pay attention. “You’ve got to care about your customers if you want them to care about you. I watch what people eat. The biggest change over the years in this business is people’s eating habits, people eating more healthily. I’ve had to adapt, going to more lower fat ingredients and dishes.”

Cascarino’s now offers a “healthy menu” with dishes that accommodate dieters. Among the dozen or so offerings are Roasted Chicken and a Chicken Broccoli Rabe. “We have whole wheat pasta, whole wheat pizza. We do low-fat wraps and pizza.”

Rob swears by his brick ovens and has wood burning stoves in two of his locations. “We use cherry, oak and pine, we get a cord of wood in every month,” he says. “I just think it cooks a pizza the way they were meant to be cooked. If wood was good enough for my ancestors in Italy, it’s good enough for me.”

TAKE ME OUT TO THE PIZZERIA

Rob says he is gearing up to serve his famous pizza at all eighty- three New York Met home games this year. It’s a bruising schedule that takes a crew of 40 arriving at the stadium eight hours before the first pitch, to pull off. “We do all the pizzas right there at the stadium,” Rob says. “We have a pizzeria behind home plate then we have 2,000 square foot warehouse in the stadium which is like a satellite warehouse so we can send pizzas all over the stadium, upper deck, mezzanine. Our game day average is in the neighborhood of up to 2,000 slices a game.”

Rather than have a vendor walk through the crowd hawking pizza, Rob said he increased the number of pizzerias throughout the stadium. “We have one behind home plate, one in left field and one in right field,” he says. “We have three in the mezzanine, three in loge, and two in the upper deck. We feel like it’s better to have the customers come to us rather than walk through the crowd. The pizza stays hotter this way.”

Rob says he serves several varieties at each game: Regular Sicilian, Chicken Parm, Vegetable, Sausage and Pepperoni. “We make our own homemade sauce from California tomatoes everyday. We use Grande cheese, which is the best.” Rob says that despite the long hours and hard work, being the official pizza of the New York Mets is worth it. “We love every minute of it and would like to continue doing it even when they move into their new stadium.”

Rob says his next project might be one he’s been toying with for a couple of years: a drive-through pizzeria. “All the big burger chains have them, so do convenience stores,” he notes. “I’ll just have to see if I can secure the right location. You know the cliché; location, location, location? Well it’s so true. You’ve got to have a busy corner with lots of traffic and also parking. When we were franchising our stores the first thing I looked at was parking.”

As he decides on his drive-through business, Rob currently offers free delivery at all his stores. “We have ovens and refrigeration in all our delivery trucks” he says. “They’re called the Hot Shot trucks. When our pizza gets to your house, it’s still piping hot.”

Among other projects, Rob says he is working with a company in New York that will assist deaf people with ordering pizza online. “Basically, they’ll have it set up where a deaf person can call this company with their order and the company calls me. We’re working out the details but I think it’s a great idea.”

In the meantime, Rob stays busy running his stores and getting ready to feed thousands of hungry baseball fans. “We’re constantly checking quality control so you can never let your guard down,” he says. “When you’re doing about 20 different types of pizzas, 15 different types of rolls, salads, pasta, steaks, seafood, all of it – you have to constantly be on the lookout for mistakes or problems. We consider ourselves a full course restaurant.”

In an ever-changing marketplace, it’s nice to know some things are constant. Ask Rob Cascarino what that constant is for him, and he is quick with an answer. “Mama still makes the meatballs.”